My "Words With Friends" Skills Are a Joke

And I'm good with that. 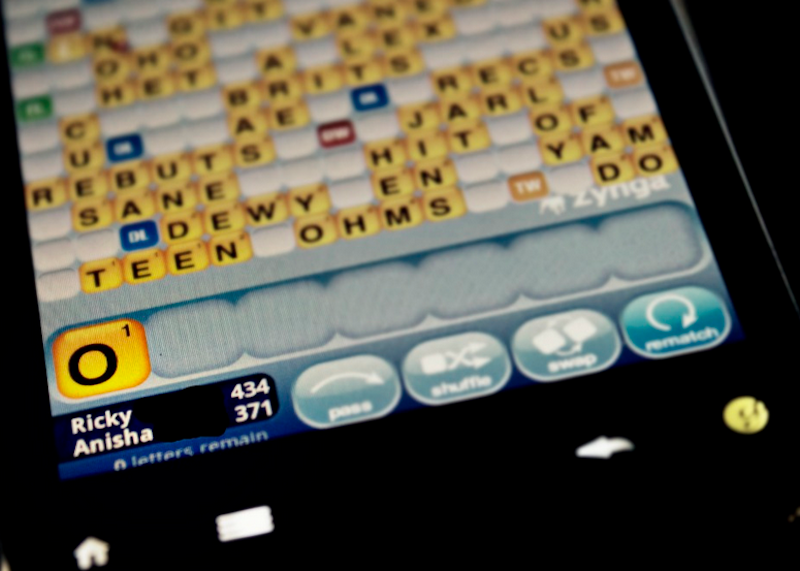 Blame Sarah: she browbeat me into doing it several weeks back, bullying and cajoling me to establish a Words With Friends account, to get in the game. Under different circumstances, I might have held out, resisted; I arrived on Facebook long after most of my acquaintances and loved ones—and even then only because my cousin passed away and I wanted to keep in touch with family members—and still haven't succumbed to Twitter. Two factors pushed me over the edge: my son's recent fascination with Scrabble, and separating from my wife. Suddenly I had no excuse not to spend hours staring at a tiny screen forming words and begging friends and strangers alike to step to me on the field of Words With Friends battle.

What's interesting is that, despite being a professional writer, I suck at Words With Friends. I'm getting clobbered—slaughtered, really—on the regular by cousins, aunts, college classmates, my fifth grade girlfriend, and my former editor at a now-defunct cultural magazine. Deborah, my older cousin, trounced me 445 to 168; Jennifer, our favorite waitress at Cracker Barrel in Round Rock, Texas, disemboweled me, 421 to 176.  Sanjeevani, my best friend, is burying me under lettered tiles at a rate too ridiculous to mention. It's sheer brutality out there, folks; if this were televised cricket or World Cup soccer, there would be no audience left to care about the outcome.

By most standards, I’m painfully inept at Words With Friends. The issue may have to do with what I find of value in the experience of playing it. On a very basic level, there are three possible reasons to compete in games of skill like this one: the fierce desire to triumph, social synchronization, and maybe some anthropological, ivory-tower urge to understand Western Civilization. For me it's the second possible reasons, with provisions. Even though Words With Friends has a chat feature, I'm more about the disembodied interactivity, that illusion of reaching out and touching people I know or used to know on a mental level, without small talk or pleasantries. In a way, it's a more cerebral gloss on using the Facebook "Poke" function.

The game has its downsides. It's addictive, albeit fleetingly, and like pretty much everything associated with the Internet, I come away with the sense that I've frittered away more valuable time doing nothing. If you're playing the free version, as I am, you get hit with advertisements every round. There's the stinging pang whenever someone declines a game you're trying to start, which might be alleviated somewhat if the game had a feature similar to the one on Microsoft Outlook that allows one to decline a meeting and provide a reason why.

Slowly but surely, I'm improving Words With Friends, keeping pace, or nearly keeping pace, or at least not emerging bloodied and eye-blacked from bouts. The curious thing is that as I get better, most of my opponents answer my plays with less frequency—which either means that my baby-steps letter prowess is threatening, or that I'm starting to get on everyone's nerves.