Is a gym workout “hot guy sh*t”? I suppose it could be. 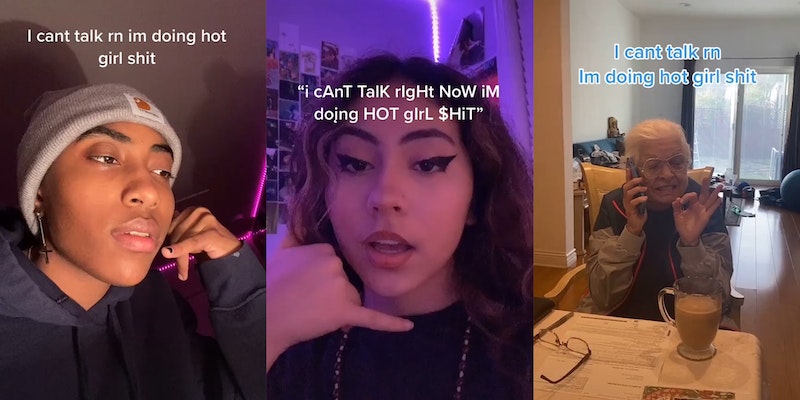 I’m trying to keep up with my offspring’s shorthand on social media. I’m grateful they both choose to include me on the news of their days; years back one of them created a three-person text group so we can respond together. I still get individual messages, which is nice, too, but that group text is often the most fun.

Abbreviating our words and phrases is nothing new. As long ago as 1985, William Safire wrote in his New York Times “On Language” column of the “elimination of first syllables in post-teen speech” where “’rents” meant “parents”, and “’za” was code for “pizza.” There’s more to post-teen speech mysteries than syllable elimination, however. Sometimes, the shortening comes down to unpunctuated abbreviation, as in the current vernacular, “RN.”  I’ll tell you about that, right now.

One of the current hot memes goes “Can’t talk RN, I’m doing hot (x) sh*t,” where the x can be filled with “girl,” “guy,” “fan” or another identifier. The idea, I believe, is that the poster is too busy to communicate, because they’re primarily occupied doing things that put them in an exclusive group with good-looking, intelligent or just popular folk.

I’m gladdened to hear that you’re busy, first of all. My elder offspring recently commented that they enjoy seeing the meme in use, that it provides examples of people being happy with themselves. That’s a positive attitude about a positive attitude. Social media is awash with “See ME”—the ego-aggrandizing glut of “Aren’t I just the best!” is overwhelming. But the use of this meme, as I’ve seen it, seems less self-centered, less braggadocio. I get the feeling that in most uses of the meme, the poster wants to impart that they’d like to chat, really, they would, but priority is the issue. This would infer that the chatting is less important, and, in most cases, I’d agree the generic “What’s Up” would fall far short of, say, getting a workout in at the gym.

Is a gym workout “hot guy sh*t”? I suppose it could be. The broad, all-encompassing second half of the meme could be almost anything. I’m alphabetizing my baseball cards—American League first. I’m trying some new eye shadow. I’m crocheting an entire jacket for myself. I’m just doubtful that the poster is actually referring to getting their taxes done, or hunting down when that elusive W2 will be released, which then would allow them to get that return started.

That’s all okay, though. The meme, as a delivery mechanism, works. The positivity, in the face of a large amount of hate, is important. We do celebrate some pretty petty things. But this grass-roots self-pat on the back, multiplied across a million tweets definitely moves the needle. You’ll find silly things to make you smile. Kentucky Fried Chicken’s official account has 1.4 million followers, but they follow a very small number of accounts. Investigation shows they follow a Geri, a Melanie, an Emma—those are the accounts of the Spice Girls, and six men named Herb. Get it? They follow “11 Herbs and Spices.” I’m in favor of finding good things to celebrate—especially when they’re found among strangers. Think for a moment about those people you “follow.”  As stated earlier, family members and close friends make up a large portion of the first ring of online connections. But the next outer ring, and the next? Easy enough to call them friends of friends, but the more likely reason you’re following is due to a retweeted tweet, a recommendation, a linked video, one of the many web tentacles that snare us.

Rather than sending an atta-boy to someone you see in the next room, the “cant talk RN” post goes to each of that sender’s followers. From there, the pond ripples almost endlessly, even in cases like mine, where you can see I have less followers than, say, Taylor Swift. The message, “I’m happy to be accomplishing something today, and I thought I’d let you know,” seems innocuous enough to harmlessly amplify. I wrote for Splice Today, today, I can’t talk right now.