How Do You Spell Laughter?

It better not be "hehe." 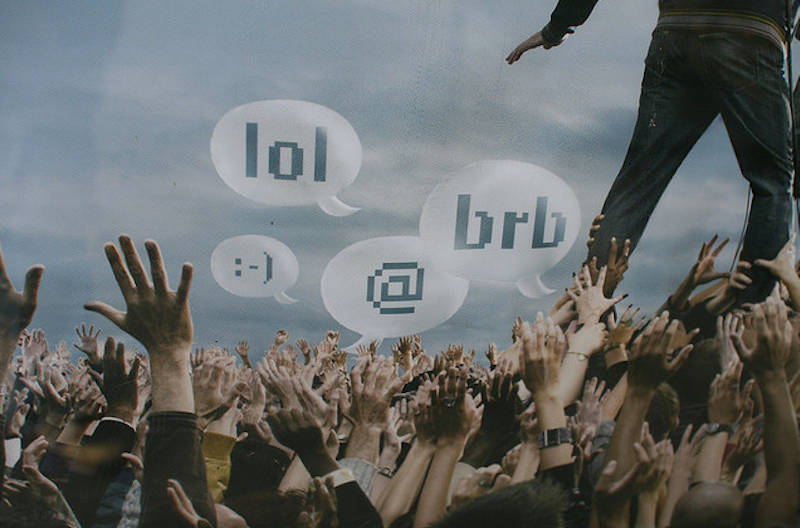 I went to a comedy show a few weeks ago where a vibrant, red-headed comic came on stage and talked about how much she absolutely hated the word “hehe.”

“If I go out with a guy and he texts me ‘hehe’ at any time, I’m out.” Damn, girl. We all have little things that turn us off and make us want to run for the hills, but I never thought “hehe” would be one of them. So, speak carefully everyone. It did get me thinking about laughter on the Internet, especially since most of the way we connect to each other now is through screens—G-chat windows, Skype messages, Facetime and the like. Laughter is one of the most basic forms of human connection. But how do you spell laughter?

I probably send around 1500 text messages a month—who knows the actual number, though, because they’re unlimited. If you’ve sent a text message before, you know that those things are impersonal and that sometimes a punctuation mark can leave a message totally misread or misinterpreted and then you get all ape shit because you’re not totally sure what the person meant!!! I almost never use punctuation marks in my messages. Sometimes I use question marks and exclamation points because I am excited and curious. But I almost never use periods. A period, to me, is like a dramatic, tiny-ass bitch slap, especially if you know that the person never uses periods. Even I’ve used periods in my text messages to indicate that I was not happy.

So, for instance, “we need to talk.” = subtext you’d better sit down because shit’s about to get real.

We spend so much time communicating with one another via screens that some people break up via screen. We set up dates via screens. We text booty calls via screens. But the whole point of communicating is to express human feelings and emotions, and the mechanical nature of screens strips that away.

That’s why I love thinking about how people laugh and express themselves on the Internet. Maybe I’m alone in this, but I think “omg!”—all lowercase—is a cute expression. I love the way it looks. But more to the point, when someone types “omg!” you know that something amazing or interesting has happened.

Laughing online, though, is a different story. When we’re online, it’s hard to know if we’re laughing because something is really fucking funny or if we’re just typing letters to fill up space. When I watch television or share an image on Facebook or comment on something really hilarious, I always use some variant of lol. If you “hehe” or “hah” then it’s not really that funny, is it? Maybe that’s why that female comic ditches bros who “hehe.”

There are different degrees of spelling laughter on the Internet that tell you how funny something really is. If you type “lol,” the simplest, most universal expression of the feeling of laughter, you’re not really laughing, are you? “Lol,” “hehe” and “hah” are kind of like meh.

But! If you’re like LOL, in all caps, then you know something is super funny. There’s emphasis, it’s big and makes a statement. The best way to laugh out loud on the Internet, though, is the uncontrollable lol. You know, “lololololol.” If I ever type this to you then you know I am laughing my ass off, like, in real life, because when you laugh, something is so funny that you spit your food out, you clap or slap the table, you grab your side, there’s some kind of involuntary reaction. When you go “lololololol” or even LlllllllooooolllllllllL!!! you’re having a spasm! It’s funny! Your body is having a spasm! You appreciate the joke and your human reaction is coming through the impersonality of the screen.

The hardest part about living in the digital era is maintaining the approachability and intimacy of human connection. As more and more jobs are given away to computers and as tech nerds figure out even more amazing ways to make life easier and to connect us through technology, laughter is the one thing that makes us human.