The death of Alt Lit, whatever that is. 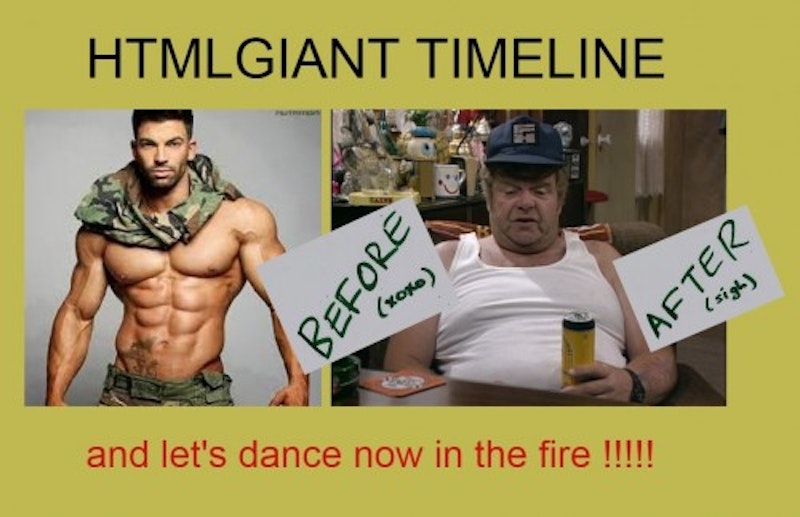 A couple of years ago a friend turned me on to Breece D’J Pancake, a remarkably talented writer who published only six short stories before he shot himself in 1979, at the age of 26. Pancake is a cult favorite, praised by Chuck Palahniuk and Andre Dubus III, among others. This past summer I decided to order The Stories of Breece D’J Pancake for a friend off Amazon, and noticed in the “Customers Who Bought This Item Also Bought” section five of six writers I’d never heard of. I read almost exclusively modern fiction, but for me that’s 20th century fiction. So I browsed: Scott McClanahan, Tao Lin (who I’d heard of), Shane Jones, Juliet Escoria, Sam Pink (who I actually emailed with a few years ago when I came across his blog, but had no idea he was published), and so on.

I bought The Collected Works of Scott McClanahan Vol. 1 because I liked the cover (I know)—a B&W photo of McClanahan with a huge smile, wearing a medical eye bandage. It also had a blurb from Donald Ray Pollack, and it looked like it was published by Penguin Press; so, you know, how bad it could be? Turns out it’s actually published by Lazy Fascist Press—not sure if that’s copyright infringement but I appreciated it, and ordered Vol. 1 of the Lazy Fascist Review. Anyway, McClanahan’s book was mostly so-so—I liked a lot of it, but was simultaneously unimpressed.

But Googling McClanahan brought me to the HTMLGIANT site, for which I’ll be forever grateful. HTMLGIANT is a lit blog—a bunch of twenty and thirtysomethings who review each other’s books, publish poetry and occasionally offer absurd Tumblr-type posts (e.g. “30 Pictures of Refrigerators”). For me, it’s the only lit blog I know—a resource for finding new writers, and not just 300-word BuzzFeed “23 Reasons I Should Just Fucking Kill Myself Already” shit writers, I’m talking about ambitious novel-writing types. Not that all of it was good, but at least every few days there’d be something that got my attention (e.g. Jeff Griffin's LOST AND or Josh Ostergaard’s The Devil’s Snake Curve—all the more relevant now that the KC Royals have won the first two games of the ALDS).

HTMLGIANT is, unfortunately, shutting down. Oct. 24 will be its last day. Yes, there will be more lit blogs, I’m sure, but I liked this one. I hadn’t heard the term Alt Lit until last week, when HTMLGIANT published a round-up of rape accusations against Pop Serial editor Stephen Tully Dierks (I also hadn’t heard of Pop Serial). Nicky wrote about this on Thursday, and his take is, well, pretty much everyone else’s take. Ever since Gawker took up the story there’s been no end of hysterical rants—it wouldn’t be the Internet without hysterical rants.

I don’t really want to get into it too much—because, of course, as a guy I’m just another cog in the Patriarchal Machine or whatever, so my opinion is inherently anti-woman—but I will say that Elizabeth Ellen’s take (or, specifically, her mom’s take) in “An Open Letter to the Internet” says it all better than I ever could. After Dierks, there were more allegations and confessions. Tao Lin—Alt Lit’s most popular writer—was accused of abuse and plagiarism and “statutory rape,” all surrounding his 2010 novel Richard Yates (I’ll regrettably link you to BuzzFeed for the full story, if you’re so inclined, which is still 100x better than linking you to Jezebel). Then, in a near incoherent blogpost, Stephen Michael McDowell confessed to something or other—Gawker, of course, pulled the only quote that fit their agenda: “i consider myself a rapist, a sex offender, and a predator…” Reading it again I think all he’s confessing to is having sex with drunk girls.

ive recently… had sexual encounters with multiple people who were drunk, while i was also drunk, on cocaine and/or stoned, thinking because of their enthusiasm that it was consensual, not with the intention of taking advantage of their bodies, but with an earnest desire for a strong human connection with them, only to find out they werent aware of their actions, or what i alone remembered doing with their bodies

Yes, one-night stands aren’t very fulfilling. Good for you for wanting something more. It must be exhausting taking yourself that seriously.

Gawker and other sites are now proclaiming the “death of Alt Lit,” while Dianna Dragonetti and Alexandra Naughton are starting up a Tumblr for the all-girl's “empathlit." HTMLGIANT’s original post announcing its shut down didn’t mention Dierks or Lin, but the subtext is all too obvious. The site’s been around for six years. Managing Editor Gene Morgan announced he would “step aside… effective immediately, and… open posting up for nearly everyone that has ever been a part of the site.” So, I encourage everyone to enjoy the upcoming ruckus—truly bizarre shit mixed with earnest remembrances—and take a while to browse the archives. You might just find something beautiful.