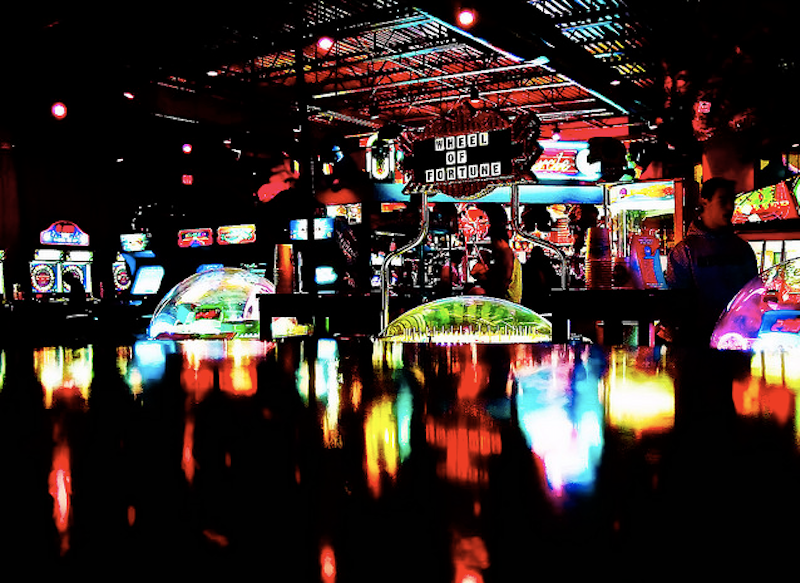 Despite the best efforts of Strange Days, Ben Bova’s Death Dreams, and the tech-geek fantasy hivemind, virtual reality hasn’t managed, as of this writing, to take over the world.

A recent visit to the Dave & Busters’ location in Round Rock, Texas suggests that maybe it has, without anyone quite being aware of it.

If you’ve somehow managed to escape the Dave & Busters phenomenon, think of it this way: Chuck E. Cheese for adults. A visitor to Dave & Busters is encouraged to eat, drink, be merry, and game hard. There are hoops games. There are simulacrums of Vegas slot machines. There are cheap county-faire games. (There is an air-hockey table, a pastime that’s an old favorite of mine and my wife; she beat me. Twice.) There is a Dance Dance Revolution console, a Frogger console, a Space Invader console; they are off in a corner.

Otherwise, the arcade fare is numbingly, invariably first-person-shooter: you are battling evil undead hordes, you are piloting a flight simulator in near real-time, you are blasting the Bejeezus out of enemy soldiers in a mall in some sort of fucked-up future, you are driving in an urban car race or hunting deer. You. You and twenty other people, because there are 20 NASCAR-inspired consoles in a row.

Arcades aren’t my bag these days and I’m out of touch with the format’s trends, yet I found this one’s willingness to play to the basest, crudest aspects of human nature—to appeal to the sugared-up 10-year-old and drunk 30-year-old demographics—thoroughly disheartening. Because, well, I’d really been looking forward to teaching my son how to play games like Street Fighter, Mortal Kombat, and cuter, more Shigeru Miyamoto-esque fare like Bubble Bobble, games that occur on a two-dimensional plane and demand, because of the various buttons and joysticks involved, a good degree of hand and eye coordination.

When Quincy Johnson and I spent hours and tons of allowance money at mall arcades as pre-teens and young teens, we rotated through, playing each of the 20-plus games available to us because there was one of each game, and because these arcades were packed to the jostling gills with other kids who wanted to pilot Ms. Pac-Man through mazes or pit Wolverine versus Iron Man or fancy themselves the hooded, deadly avatar of Ninja Gaiden. That variety, the fullness of the classic arcade experience, is denied in the Dave & Buster’s paradigm, which mirrors the rapidly shrinking national liberal arts curriculum in its eschewing of gaming choices, and myopic underwriting of the next best thing to virtual reality.