Have a meaningful conversation about the devices that decrease them. 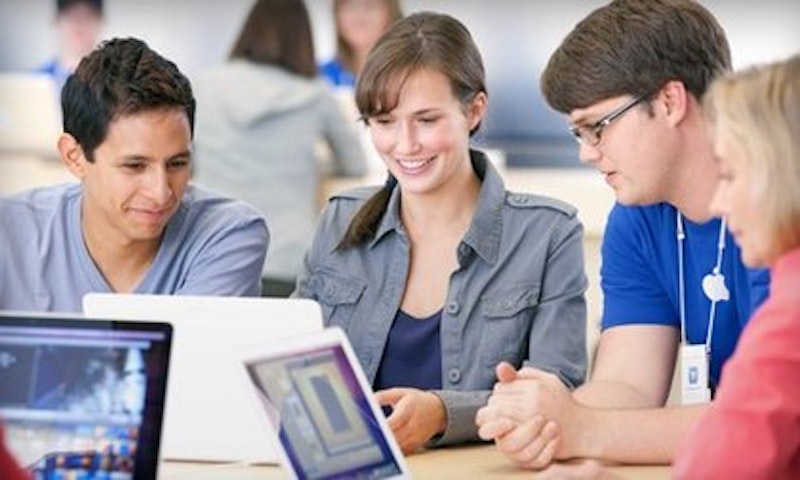 Earlier this week, I was sitting at the Apple store’s “Genius Bar,” waiting for a techie to help me with iPod problems. It was in the middle of a Wednesday afternoon and the store was packed; people and employees filled every space and stool, talking and laughing, and I felt like I was at a party.

It was strange that so many conversations were happening at one time, all geared toward the very tools that decrease the need to actually talk with one another. The customer next to me sat in front of his Mac while the young female saleswoman was telling him that her aspiration after college was to create video games. Among all the cellphones, computers and gadgets, people were actually having face-to-face conversations.

The Internet and mobile technology have quickly extinguished meaningful connections we have with others. I’ll admit, with the exception of my parents, I communicate with others by text or email, including my doctor. Being a writer is a lonely profession. Some days, the only verbal communication I have is with the checkout girl, and that usually only happens when the self-checkout line is backed up.

Who cares if you have 2000 friends on Facebook? Can you really maintain genuine friendships with all of them? We’re lucky to count on one hand the people we really connect with and take the time to talk to in person. New surveys show that most Americans would like to reduce their use of social media in favor of face-to-face contact. No surprise. Nothing beats the real thing.

In her new book, Reclaiming Conversation, Sherry Turkle, a psychologist and professor at MIT, says America is more talkative than it’s ever been. The problem is, we are talking to each other, not with each other. Real conversations are full of nuances, revelations, physical expressions, pauses and time to read each other. This is part of what makes us human. “The Internet is always on. And it’s always judging you, watching you, goading you. That’s not conversation,” Turkle says.

I deactivated my Facebook account because I found it to be a time suck. When I tell people this, their reaction is always “Good for you!” If I want to congratulate someone on an accomplishment or a birth, I’ve now begun to call them, which is a step closer to forging more genuine interaction. I wonder what the future holds. Will humans lose their ability to read each other’s faces? Will it make us more isolated yet more connected? Will the humor we share with each other be replaced by a smiley face emoticon?

I don’t know the answers but if you are feeling disconnected or need to look into someone’s eyes and have a real conversation, visit the Apple store. Everybody there is talking.