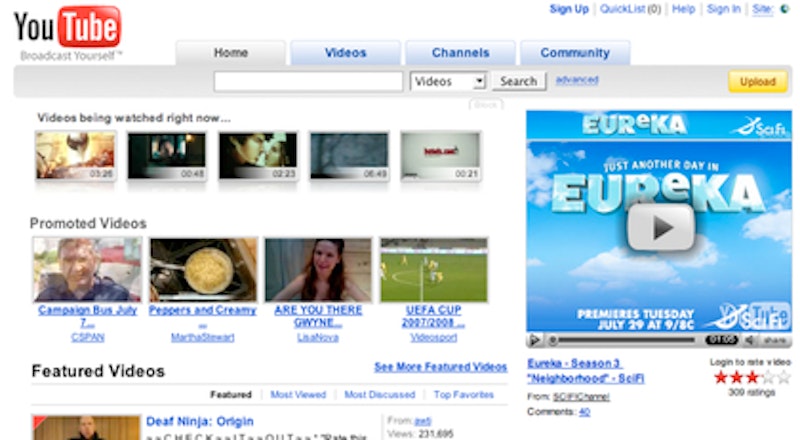 NBC. CNN. TBS. And now YBC—the YouTube Broadcasting Channel—the latest form of corporate entertainment brought to you by shareholders of Google Inc. Ever since Google acquired YouTube for more than $1 billion in 2006, everyone knew YouTube would grow from a scrappy website for spoof videos and noisy vloggers to an ever-expanding and increasingly marketable distribution machine.

I'm not judging. I have no problem with selling out and mass production. I'm a graduate student; someone should be making money. Sure, YouTube isn't making MySpace money yet (with annual revenue quickly approaching $1 billion), but it's not doing badly. YouTube should earn about $200 million in 2008 and some analysts project it'll nearly double that next year. YouTube now has the revenue of a small TV network.

Who cares, right? Websites make money now. They have to. A website without a profit is so very 1990s; those are the days of yesteryear. Tuck them away with memories of a solid economy and solvent national government. Let's be honest: ever since Netscape the web has been fertile soil for corporate development. Remember the dot-com boom? Web 1.0? The leftovers are still with us today: Amazon, eBay. The strongest survived, bloomed and made a ton of cash. But some people still care about the old YouTube, and worry about its shift to the YBC. Take Daniel Gardner, a YouTuber known for creating wacky characters and a very timely Britney Spears spoof during the “old” days.

"I don't know how long you've been part of YouTube...but there used to be a time, during the 'golden age'..." said Gardner, who at 20 sounded a bit like a old man recalling his youth, "where the community was on fire...and users knew each other by name and shared feelings and opinions. It was great!" That was two years ago, right around the time of Google's acquisition. Zipster, another famous YouTuber who started vlogging around the same time echoed his sentiments. YouTube was a "community," he said, where people knew and supported each other. And, most importantly, could find each other.

"There was just a core group of people who were doing vlogs," Zipster told me. "It was easy to get attention." YouTube's small size allowed him and others like Renetto, Nalts, and LisaNova to foster a group of followers who are still loyal to his channel. Zipster has met fans—essentially strangers—all over the United States and in Europe. They have housed him, kept him company and supported him. When his father passed away, he received gifts, cold cuts and flowers, from subscribers whom he'd never met.

Those days are probably gone. With about one billion video views per day and growing, YouTube is mass-distribution machine, milking money from the efforts of thousands of fame-thirsty entertainers. Still, the heart of YouTube remains its user-generated content, and, in my opinion, its personal video blogs. Despite the grumblings about copyright violation from the old, old, old media, YouTube makes its mark on remixes, spoofs, rants and webisodes—creativity, originality. YBC knows this. Last year, the site launched an initiative to share revenue with its most popular and productive performers. By that time, the "community" was already fading away. YBC handpicked those users who deserved money—many of whom those who had benefited from the small community of its past: LisaNova, Renetto, etc.

Today those YouTube users who want cash have to reach a certain threshold of fame, become a partner, and apply to get in. The program has doled out over $1 million; it's not nearly enough for any of the partners to live on, compelling many of them to create their own websites—much in the way Lonelygirl15 did—to claim their own ad revenue. But the program is a great deal for YouTube: the partners bring the viewers. Many of them have the viewership to rival an unsuccessful cable TV show.

This is TV 2.0, the same corporate, old media model jazzed up for the web: pay up for the stars and make money from cheap talent. NBC paid millions per episode for the six Friends but only a handful of its employees made that kind of cheddar. YouTube seems unlikely to stop here. Already the site has embedded advertisements in popular videos, and this month it hinted it may add "pre-roll" advertisements: short ad videos that play before a YouTube clip, much like the ones on NBC.com, NYTimes.com and other sites.

I'm not the wimpy academic whining for the loss of a community. "Corporate" is not a dirty word for me. Like I said, money is fine. People need to make it. I simply think we should recognize what we now have and honor what we once did. Understanding that YouTube is now YBC will also allow us to identify its foils and support them if they need help: Vimeo, for instance, and the live broadcasting websites blogTV, Justin.tv and uStream.tv. YBC remains a revolutionary outlet for creative expression and an appropriate alternative to mainstream television—think of all the pirated content still on its server. But don't expect the revolution to change too much. Google's shareholders will see to that. Invest now or forever hold your peace.