Trying to make sense of copyright law as it pertains to the Golden West's stereo. 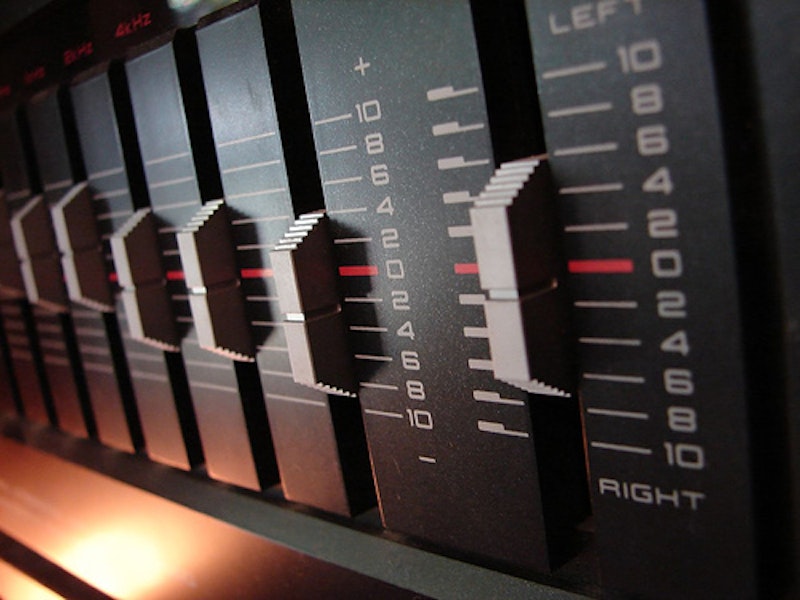 Yesterday, long-time Splice Today commenter Dan Stack, an acquaintance, and I started to butt heads over Zach Kaufmann’s article on ASCAP cracking down on bars and restaurants that play unlicensed music—unlicensed in the sense that plugging an iPod into a stereo is in violation of the musicians’ rights. Streaming music from an above-board site like, say, Pandora or Rhapsody is on the level, since those sites act as copyright middlemen, but that’s as far as it goes.

I find that a bridge too far, despite the consistency of its logic. Dan and I would quickly agree that, as Kaufmann wrote in an earlier column, “our copyright law is fucked.” No question about that. Pretty much all modes of expression—music, journalism, photography—and their subsequent corporate entities are in the grips of a vacuum: The Internet has made free media a given, and yet no one has found anything close to a sustainable business model wherein the product—produced at the expense of many dollars and hours of labor—is free.

I’m sympathetic to that argument. I do my best to keep my own media consumption on the level, whether it’s via Hulu or Pandora. If I grab music off MediaFire my justification is one of timeliness—downloading an obscure, out-of-print afrobeat or soul record from the 60s seems less egregious a copyright violation than downloading leaked master tracks from the upcoming What Have You album. Is that legally consistent? No. But if no one hears the music, does it exist? Okay, in all seriousness, the basis for US copyright law is found in the Constitution, which states simply:

The Congress shall have Power [. . .] To promote the Progress of Science and useful Arts, by securing for limited Times to Authors and Inventors the exclusive Right to their respective Writings and Discoveries.

Pretty straightforward stuff, but it certainly doesn’t provide a clear basis for our post-Napster world. What’s interesting to me about Dan’s argument is that, in my opinion, it ultimately benefits the corporations, not the artists themselves. By limiting exposure to artists whose labels are partnered with Rhapsody et al, the democratization of expression—a privately owned business should be able to play whatever it wants*—is compromised. It’s impossible to quantify the positive effect artists receive when I ask a Golden West bartender to tell me what I’m listening to, which then enlightens me to a new artist and thus a potential record sale is born. It distresses me that the argument is one of monetization—as if the freedom loving musicians of the world are finally adherents to the almighty dollar, as if music/art/expression doesn’t simultaneously occupy a sphere beyond the monetary. It’s like the boomers coming home to their conservative roost after a few burned bras and a human chain across Route 1 circa 1970.

And perhaps there’s a tiny libertarian in me. The business owner’s freedom of expression is as important to me as protecting artists. But in this instance the artist is a brand, a line of tax code, and thus any iteration of said brand in the real world must be subject to the steep regulations that govern marketing and branding. Artists aren’t exposed; they’re limited. To impose blanket regulation on what music issues from a bar’s speakers is ultimately penny pinching, within the law but in violation of its spirit. Dan wrote:

That's why professional musicians are represented by ASCAP; because people like their music and they should be able to benefit financially from that demand. This is exactly the same as hotels licensing artwork that hangs in the rooms and lobbies.

The art in hotel lobbies is near-universally terrible.

I worked at a Starbucks for a summer, earning decent money slinging coffee at the post-frat/sorority-now-with-a-kid-and-a-facelift population of Spring Valley, DC. Starbuck’s whoring of music—from Michael Bublé to John Coltrane—is a worn topic, but it bears repeating in this instance. The last thing I want is to see joints like the Golden West forced into corporate confederations of music, where bands are divided into a Column A and a Column B. I see the consistent logic of Dan’s argument repackaged by Comcast when it argues it can limit what Websites you’re allowed to visit on their network; net neutrality has already evolved into one of the crucial debates over the future of media—and it might be a stretch, but I see a corollary of the net neutrality argument in the issue at hand.

As a colleague mentioned, what’s to stop ASCAP from cracking down on any house party, kegger or flip cup tournament that involves a booze-money jar? Radio has turned into a shell of a cabal of Big Music. I’d hate to see that dead-end corporatism affect any other spheres of the music industry, and it reminds me of New York City’s crackdown on amateur photographers and filmmakers, since the city itself is a brand and must be licensed accordingly.

Artists have it tough. ASCAP is within its rights to crack down on bars and restaurants. I can’t deny that. But for the thousands upon thousands of bands that don’t have corporate protection, what of them? How does the band What Have You benefit if the Golden West doesn’t have an Internet connection and can’t play their latest album via Rhapsody and therefore limiting their exposure? Isn’t this exactly how radio turned into infomercial after infomercial for Miley Cyrus and Lady Gaga? To me there’s no question that the most important issue for artists and copyright law is how to navigate the Internet. It’s impossible to count how many dollars are lost through illicit downloading, but you’re not going to get any of those dollars back by unplugging an iPod at the Golden West.

*I am well aware that, as on-the-record dissenter of the Peoples United decision, I just used the Supreme Court’s majority argument. I can’t say I’ve reconciled these two views, but I do see daylight between the notion of unlimited campaign contributions as expression and the use of a stereo system. More on this later.