Will Someone Think of the Children?

The here and now of intellectual property and copyright law is a pretty strange place. 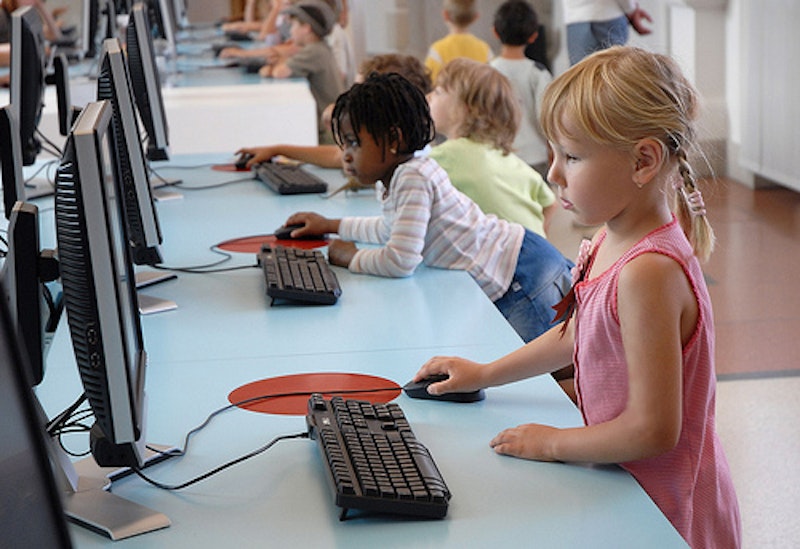 I'm no legal scholar, but I'm going to go ahead and make what I think is a pretty uncontroversial statement: Our copyright law is fucked. What with the whole not-really-having-revised-it-since-around-the-advent-of-VCRs thing, we now find ourselves, year after year, technological advance after technological advance, increasingly unable to sort out the difference between fair use and legitimate violations of intellectual property. Below, four recent examples:

Back in 2004, Austin-based comic artist and musician Brad Neely came up with the idea (while drinking with his friends, of course) to do an outlandish audio-book style retelling of the first Harry Potter book, Harry Potter and the Sorcerer's Stone, to be played overtop a muted screening of the film version; basically, one part Mystery Science Theater 3000, one part The Dark Side of Oz, and one part What's Up Tiger Lily. While J.K. Rowling didn't seem to have any problems with it, Warner Brothers (who made the film version) did, at least when it came to Neely performing Wizard People live. WB wouldn't allow theaters to screen The Sorcerer's Stone if Neely would be doing his retelling. As Barbara Brokliati, a spokesperson for WB, told NPR back in 2005, "If they're going to do something different [than simply screening the film], they need to come back to the copyright holder, we'd have to look at the work ... There's a lot that goes into it, it's not just an automatic decision." Many, however, thought Neely had come up with a completely new art form, and Neely contended he never made any money off Wizard People.

Last spring, Fred von Lohmann wrote an article for Electronic Frontier Foundation titled, "iPods, First Sale, President Obama and the Queen of England," which serves as both a good primer to some basic copyright law as well as the perfect example of how incredibly confusing the whole damn thing is. Here's the basic situation: A couple months after his inauguration, President Obama traveled to the U.K. and met with, among others, Queen Elizabeth II. Reports were that during their visit Obama gave the Queen an iPod with forty some show tunes loaded on it, because I guess she really loves Cats or something. The question Lohmann asks is, "Did he violate the law when he did so?" His answer: "You know your copyright laws are broken when there is no easy answer to this question." An excerpt:

Traditionally, it has been the job of the "first sale" doctrine to enable gift giving -- that's the provision of copyright law that entitles the owner of a CD, book, or other copyrighted work, to give it away (or resell it, for that matter), notwithstanding the copyright owner's exclusive right of distribution. In the digital era, however, first sale has been under siege, with copyright owners (and even the Copyright Office) arguing that it has no place in a world where "ownership" has been replaced by "licenses" and hand-to-hand exchanges have been replaced by computer-mediated exchanges that necessarily make copies.

Shepard Fairey's hyper-patriotic stencilized drawing of Obama, the so-called Hope poster, that became iconic during the 2008 Presidential campaign, turned into a huge legal debacle last year when the Associated Press source photo upon which Fairey based his drawing was identified. While the AP, and the AP photographer, Mannie Garcia, who took the original photo, both say that compensation is owed, Fairey, and his attorney Anthony Falzone, both argue that the Hope poster falls under fair use (basically, yeah I used that photo but I've made it into something completely different) and filed a preemptive lawsuit seeking a declaratory judgement saying just that. A recent blog post by Henry Jenkins, featuring Fairey's take on artistic originality ("it's virtually impossible to be original") and a lecture by Evelyn McDonnell is one of the best round-ups.

4) Girl Talk's sampling mayhem, plus Joe Satriani, Cat Stevens, Emanitos Verdes, everybody else even your mom vs. Coldplay

After Greg Gillis (aka Girl Talk) made it big with Feed the Animals, an album of hundreds and hundreds of popular song samples all mashed-up, everyone started asking, How long till he gets sued? Well, he's never been sued, and it doesn't look like he ever will be, and just why that is -- and, more broadly, why the music industry is at the center of all this copyright stuff -- made for some pretty angry back-and-forth on intellectual property in the digital age, especially after Andrew Dubber from Deleting Music went all "Won't someone please think of the children?" on us. As Peter Friedman put it:

Well, I think I am a lawyer just like the lawyers representing Metallica, the Guess Who, and anyone else whose work has been sampled and repurposed by Gillis. And if I were advising one of these clients (or I were representing the RIAA and could influence the lawyers for Metallica and the Guess Who), I would advise that client not to sue Girl Talk; Gillis’s argument that he has transformed the copyrighted materials sufficiently that his work constitutes non-inringing fair use is just too good. I’d go after someone I am more likely to beat. Othewise, I’d lose all the leverage I have with the existence, as yet undisputed in case law, of the decisions in Grand Upright Music and Bridgeport Music.

Meanwhile, who-cares-anymore band Coldplay was stacking up the lawsuits when just about everyone ever started claiming that Coldplay had ripped them off. I'm just gonna let YouTube tell you about it, cause I don't even feel like dealing with any of these shit bands.