Anita Sarkeesian Is a Rabble Rouser?

So much misogynist hysteria. 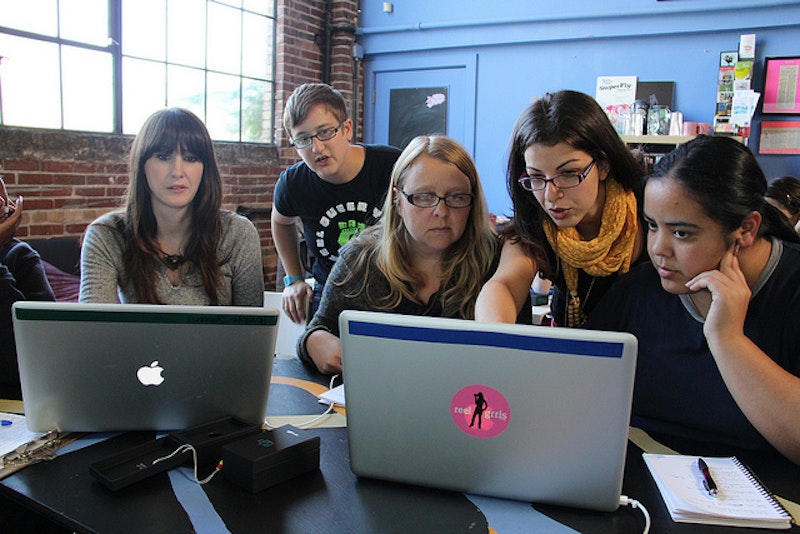 I'm not a gamer: Tetris and Zork are about the extent of my video playing experience. So I'd never heard of Anita Sarkeesian until recent reports that she'd been forced to leave her house by death threats from people pissed off at her feminist criticism of video games.

Feminist criticism often elicits ridiculous hysteria from the comics community. This is more intense, though; poking around the web, there are whole Internet communities and clubhouses devoted to hating Sarkeesian and her duplicitous feminist ways. So, I checked out her latest video to see what all the fuss was about. If the pushback was this hyperbolic, surely Sarkeesian must be pugnacious and incendiary, right?

As it turns out, that’s incorrect. The latest video in Sarkeesian's series is the blandly named "Women as Background Decoration (Part 2)." The video itself is every bit as low-key as the title. The visuals involve a news anchor talking-head report with extensive footage from video games played throughout as examples. Sarkeesian's tone is even and uninflected to the point of tedium. There's a potential irony in the contrast between her lack of affect and the over-the-top carnage in the video game clips she shows, but she never capitalizes on it. It's clear that she doesn't have a thespian bone in her body; you get the sense that she'd rather be writing a thesis than speaking to the camera.

Her message isn't any more combative than her presentation. Early on she defines the "women as background decoration trope" as:

The subset of largely insignificant non-playable female characters whose sexuality or victimhood is exploited as a way to infuse edgy, gritty or racy flavoring into game worlds. These sexually objectified female bodies are designed to function as environmental texture while titillating presumed straight male players. Sometimes they’re created to be glorified furniture but they are frequently programmed as minimally interactive sex objects to be used and abused.

Now there's a paragraph torn from the yellow press. If it were me, I'd probably say something like, "Hot female bodies are dumped in the game environment to give troglodyte male players something to jerk off to"—and then people would at least have a reason to get mad. But Sarkeesian uses neutral language, and doesn't implicate the users of the game at all. She says that the game seems designed to present women this way; she doesn't say (as I might, because I'm mean) that gamers are bad people because this is what they want. She's studiously even-handed and non-confrontational.

Similarly, Sarkeesian doesn't ever say, "Games are a debased form, and you morons need to all go do something else like read a book." On the contrary, she notes that games are simply picking up on tropes that are prevalent in the rest of the culture—for example, as she says, eroticizing dead female bodies is endemic in Hollywood films and fashion editorials, not just in video games. Similarly, her point that female characters are often subjected to violence as a way of advancing the male plot/psychodrama is simply a restatement of the Women in Refrigerators trope that Gail Simone defined for the comics community 15 years ago (and the ideas weren't original then, either.) Sarkeesian doesn't reference Women in Refrigerators directly, but comics and games have enough overlap that you wouldn't think the ideas would be novel and terrifying. The rest of the criticisms she presents are similarly straightforward and obvious. Hey, she says, using dead sexy female bodies as props or (in one case literally) doorstops suggests a lack of respect for women.

Some of the games community is on board; major nerd figures like Joss Whedon and Will Wheaton have offered Sarkeesian support. And there have been fair criticisms of Sarkeesian by sex workers who object to her use of the term "prostituted women" in an earlier video (the most recent one drops that language.) Others, though, have come utterly unhinged. A mild-mannered suggestion that games start to think about representation of women at the same levels as comics did more than a decade ago is, apparently, one of the signs of the coming of the antichrist. No doubt Sarkeesian was right to keep her videos level and dry. Lord knows what the gaming community would have done if she had any sense of drama.