The surprising beauty of an old jukebox. 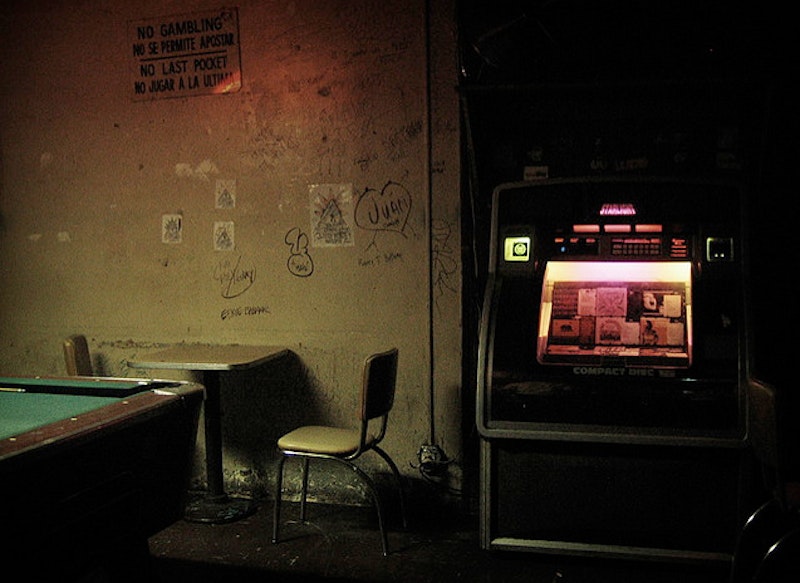 I was out at a bar a couple nights ago, knocking back a few beers, when I realized I had a couple of dollars in my pocket and decided to put some songs on the jukebox. This wasn't exactly your standard 50s-style honky tonk juke or anything, which are pretty hard to find anymore, it was a TouchTunes digital jukebox, which, for $1 a song, allows you to play almost anything you want.

I've seen TouchTunes more and more over the past five years, usually at bars that are half neighborhood diner, half dive. They now dominate the Jukebox Industry, such as it is. Their website lists 41 locations in Baltimore, though not the bar I was at, so I guess that list is somewhat out of date. Yet I've decided I don't like TouchTunes.

It's not so much that I appreciate how retro and hip an old-fashioned jukebox is; that's all well and good—sort of the way I prefer vinyl but don't in fact own a record player. I've been to some bars with really good jukeboxes too: the Nachbar in Louisville, the Vern in Portland, Club Charles here in Baltimore.

And I know it's kind of awkward to complain about TouchTunes as "too convenient." It's not like I complain about Amazon because I miss driving to the mall and rummaging through stacks at Sam Goody. But jukeboxes are a novelty—at least they're supposed to be—and there's nothing convenient about a novelty.

Really, it's the half-broken, dusty jukebox in some shitty only-booze-in-town bar that I like best: the kind of jukebox you walk up to and find Frampton Comes Alive! and Styx' Pieces of Eight. Not that I want to listen to "Show Me the Way" or "Renegade" (who does?), but I know there's always a really good album stuck in there: Sticky Fingers or Nebraska or some obscure mid-90s alt-rock that was just never thrown out. It's like when you're in a cluttered used bookstore and you lift up a stack of shitty mass market paperback Danielle Steel romances to find a leather-bound first edition Faulkner. You found this; you know its value. "What's this? It can't be. Here, between Hotel California and Hootie and the Blowfish? The Replacements. My God... Bartender! I'll have another."