A Video Game That Understands Depression 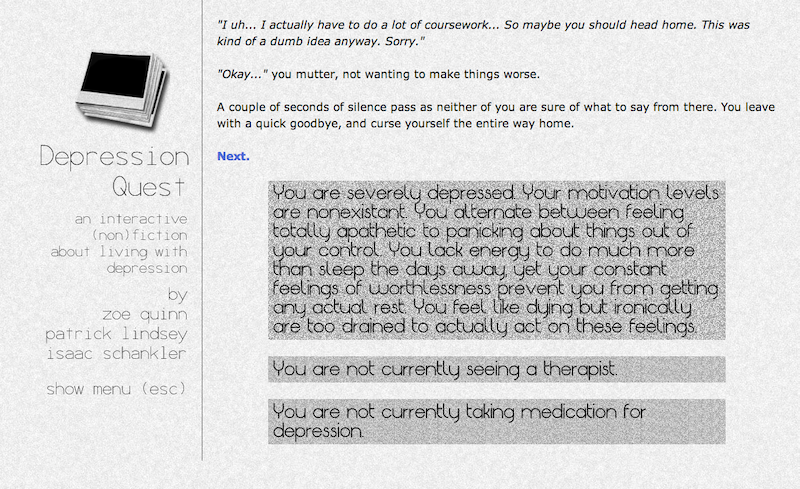 While I was home last weekend and didn’t feel like dusting off my Xbox, I went to the Internet and tried to find something new. That led to Depression Quest. Depression Quest is an interactive fiction game that was developed by Zoe Quinn and released in 2013. You play as someone living with depression, and are given a series of everyday tasks to respond to. I compare it to a point and click text adventure, but with somber music and distressing explanations of how the player-character feels. It’s not a happy game.

I’d heard of this indie game when it first came out, but was skeptical. Negative reviews claimed Depression Quest didn’t deserve to call itself a video game, was a misrepresentation of depression, or that it simply wasn’t “good.” I’d read this criticism before giving the game a chance, and ignored it until this past weekend.

A quick Google search led me to the official page for Depression Quest, which gave me two options: pay what I want, or play the game for free. I decided to play the game for free, and was immediately greeted with the sound of a piano and a disclaimer page. “This game is not meant to be a fun or lighthearted experience,” it warned. “We want to illustrate as clearly as possible what depression is like, so it may be better understood by people without depression.” With that in mind, I scrolled down to the very bottom of the page and clicked begin.

The entire game illustrates what day of the week it is and how your day went—what you did, how you’re feeling, etc. As you get to the bottom of the page and have to choose how you’d like to respond to a prompt, you’ll be given text that explains three things: how depressed you’re feeling, whether or not you’re on medication, and if you are seeing a therapist. It’s a very interesting game mechanic that helped me to determine how I wanted to react.

The experience was short: I was finished within an hour, but it left me emotionally drained. I grew anxious after clicking on how I wanted to act that day, and distressed when I realized that the more depressed I became, the less I could do. Certain options are marked out with a red line if I made too many “wrong” choices that worsened my depression.

The game is a very accurate portrayal of depression. Depression is different for everyone, but Depression Quest does a wonderful job at encompassing the daily struggle that is getting out of bed or leaving the house. It’s not as simple as being sad. I’d recommend to anyone who wants a clearer view of what it’s like to be depressed to play this game.

It’s not easy or fun, but it’s a gem. When the game is finished, it says this: depression is often ongoing and something that can never truly be “won.” I loved that. With most games, the goal is to complete the level and then win, left with a sense of accomplishment. Depression Quest isn’t like that. It understands that depression isn’t something that can be cured, but merely gets more tolerable over time.