Six Days in Fallujah is a game that wants to tell a very lopsided story, in a medium through which it shouldn’t be told. 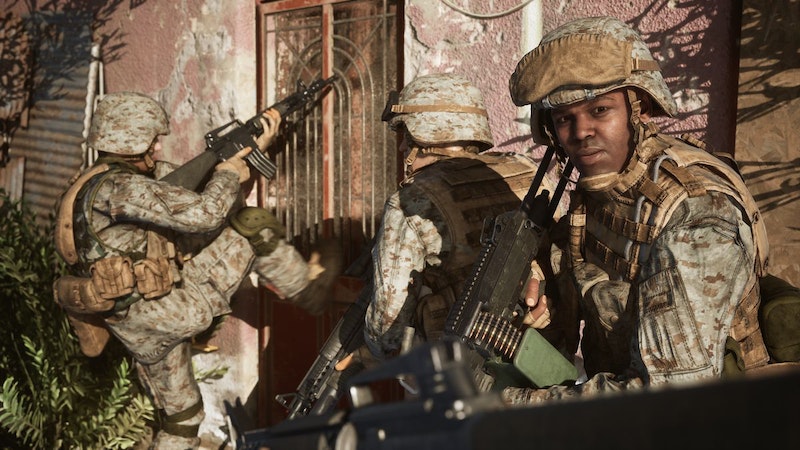 Following the United States invasion of Iraq in 2003, the US Army’s 82nd Airborne Division arrived in Fallujah. Citizens were uneasy about the military’s presence, though the newly formed local government officially labeled itself as pro-coalition. Citizens protested the military’s strict rules while pockets of insurgents attacked soldiers. Senior military officers struggled to collaborate with the local government as tensions came to a boil.

What’s now known is the first battle of Fallujah began shortly after four US private military contractors were ambushed and brutally killed. The battle lasted around a month, with US and Iraqi forces working ineffectively together. A ceasefire was agreed to, but Fallujah remained a hotbed for insurgency, crime, and corruption.

In November of that same year, the United States military’s Forward Operation Base known as Dreamland was fully functional, and local military leadership consisted of US, Iraqi, and British forces. This time, the coalition seemed to have it figured out. This multinational force conducted Operation Phantom Fury, or the now-infamous second battle of Fallujah.

Considering the political implications and fierce combat, it’s no surprise there already exists a number of films and books that at least touch on the subject of the second battle of Fallujah, but none as controversial and insensitive as Highwire Game’s Six Days in Fallujah.

The game, a first-person shooter, was originally in development in 2009 with Konami but was dropped due to the controversy surrounding it. In early February 2021, the game was resurrected by Highwire, which seemingly wanted to make the same game, just with upgraded performance for modern operating systems. Highwire seems confident that Konami’s problems no longer apply to them, and this is perplexing.

Birth defects and cancer diagnoses have increased dramatically in Fallujah since 2004. It was admitted that white phosphorous was used on the battlefield as an incendiary weapon. It’s a war crime to use white phosphorous for anything other than illuminating the battlefield. The jarring documentary Fallujah, The Hidden Massacre illustrates this and accuses the US of further war crimes. Today, 2500 US troops remain in Iraq. Making the game now instead of 2009 is far more insensitive.

Highwire was quick to go on the defensive, claiming that the game will not “grapple with the political machinations that led to the conflict,” and while this boilerplate response is valid in theory, it doesn’t apply in this case for two reasons. First, the conflict still isn’t resolved fully in Iraq, and Fallujah itself saw further violence in the third battle of Fallujah in 2016. Second, the medium of video games is not the same as making a film or television show about the same topic.

It should be noted that the effects of the battle have statistically hurt more Iraqi civilians than any other party. In the second battle of Fallujah, Coalition forces suffered an estimated 110 deaths and 613 wounded, totaling 723 casualties. The same estimates put civilian casualties at 800, and that’s not including the birth defects and illness seen afterwards.

Highwire Games was also pointed out that “[Developers] make games about other wars,” which is valid. But this sidesteps the ongoing instability in the region. When Highwire Games says “other wars” they really mean WWII, as the vast majority of war games are set in the conflict. Other games have taken place in modern conflicts, but these are usually fictional, even if only to serve as a thinly-veiled parallel to reality.

Making a game set in the fictional Kastovia (Call of Duty) may be a clear stand-in for the conflict in Ukraine, but it’s not the conflict in Ukraine, and doesn’t follow a real unit from the battle. Six Days in Fallujah follows the US 3rd Batallion, 1st Marine Regiment. The content of the game is based on reports from imbedded reporters, and extensive interviews with the soldiers. This unit participated in the clearing of houses in Fallujah and participated in combat. While the US military admitted to using phosphorous in clearing houses, Highwire insists nobody they interviewed mentioned this to them and they’d prefer to not “show the atrocities.”

Highwire can hide behind the politics excuse but portraying a battle in which a weapon was admittedly used and not including it in the game means you’re no longer focused on telling the story of what happened. Highwire has said that 10 percent of the game will focus on an Iraqi civilian who’s attempting to flee the city. In fairness, the interview material at Highwire’s disposal wouldn’t provide a reliable narrative for anyone besides Marines, but including this perspective and only allotting 10 percent of the game to it is insensitive.

As for the medium, it’s important to remember that video games have a Win-State, just like all games. A Win-State refers to the circumstance(s) that allow for the player to win or complete the game. And a Win-State is an endorsement, whether developers like it or not. If in order for a player to progress they must complete a certain task, then the game is at that moment encouraging you to complete that task.

This is a stark contrast from watching or reading about a soldier doing something. If a viewer is watching American Sniper and doesn’t want Bradley Cooper to pull the trigger in a tense scene, the movie will continue whether he does so or not. In The Last of Us II, if the player doesn’t want the protagonist to torture someone for information and refuses to, then they can’t progress further in the game.

Applying this directly to Six Days in Fallujah, Highwire Games is walking a tightrope between fitting a narrative into their own game’s format, and pure propaganda. Telling a human story of a politically-charged event can be powerful, but a video game isn’t the place for this. Players will spend 90 percent of their time in the boots of a US Marine, staring down the barrel of an M4 Carbine. This sidelines the viewpoints of civilians, Iraqi pro coalition soldiers, and insurgents. Analyzing battles is one thing, but it doesn’t need to be done interactively.