You Are What You Eat

And if you're eating nothing but sugared butter sticks, that's a problem. 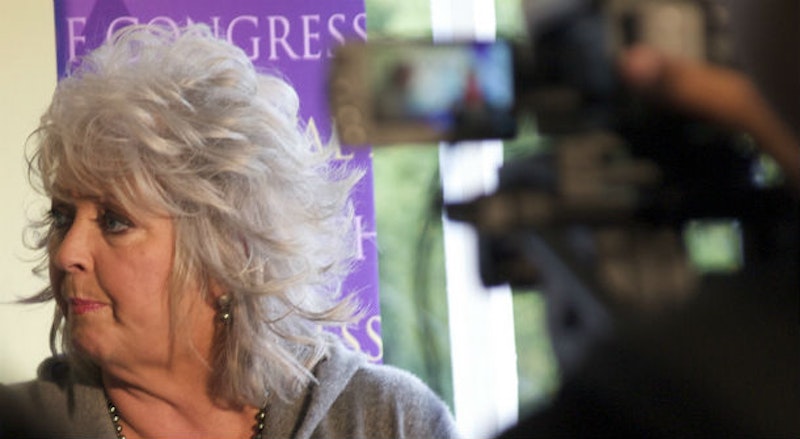 Paula Deen has Type 2 diabetes. No one should feel sorry for her. The woman makes gobs of money eating rich food and hawking cookbooks filled with bad recipes, to adults and children. If you eat like Paula Deen, you will become fat and get diabetes like her. You’d deserve it, too—anyone dumb enough to put sticks of butter and buckets of cream into everything they eat has premature death in the cards. No doubt Deen’s specialties—hoecakes, fried chicken, macaroni and cheese, lard—are delicious, but to cook by her word like a lifestyle coach is foolhardy. Plenty of people do though, and they’re worse off. I’m not trying to sound like Michael Bloomberg—but to glorify eating like a pig in a fat, unhealthy country is self-destruction.

Deen’s gleeful Southern-style cooking show might be tolerable if it weren’t for a recent sponsorship deal she allegedly signed. Simultaneous with the announcement of Deen’s diabetes, rumors appeared that she would soon become the face of a new anti-diabetes drug from Novartis, in effect becoming diabetes and anti-diabetes in one wheezing, greasy package. Novartis dismissed the rumors, but Deen will be cashing in on her poor diet with a new, Type 2-focused memoir out this spring. Good for her, I guess. She’s gamed the system and made a fortune, but she’s poisoning the well. There’s no moderation or alternatives of the vegetable persuasion in Deen’s work. Fighting obesity is an uphill battle as it is, with cheap, fast food burgers and fries that people have access to and can afford. Eating at McDonald’s isn’t a choice for millions of people; it’s what’s available. The people in charge know this, and have a vested interest in being irresponsible.

We don’t want our children to eat right because there’s too much money to be had. Barbara Walters once asked Paula Deen about her poor guidance and if she ever thought twice about making decadent cookbooks for children. Barbara screeched. “You tell kids to have cheesecake for breakfast. You tell them to have chocolate cake and meatloaf for lunch. And French fries. Doesn’t it bother you that you’re adding to this?” Deen feigned naïveté and asserted that she’d never suggest eating like that every day. But proof is in the deep-fried Twinkie filling: any hint of moderation is subtle beyond detection, and if Paula eats like that, why can’t I? She’s on TV and junk. I can eat like her and thrive.

Hawking bad, unhealthy food is not hard. We’re bombarded every day with inane Doritos and Dr. Pepper computer graphics and lifestyle ads by McDonald’s, Burger King, Taco Bell, KFC, Applebees, Chili’s, Sonic, etc. We’re taught to believe certain foods and ways of eating are good because they’re super-abundant and omnipresent. Fountains of money make something like KFC’s Double Down a household name at the expense of substantive food education. I’d be bummed if fast food didn’t exist but we start to spin out of control when people like Deen and Yum! Foods have an incentive to keep people unhealthy.