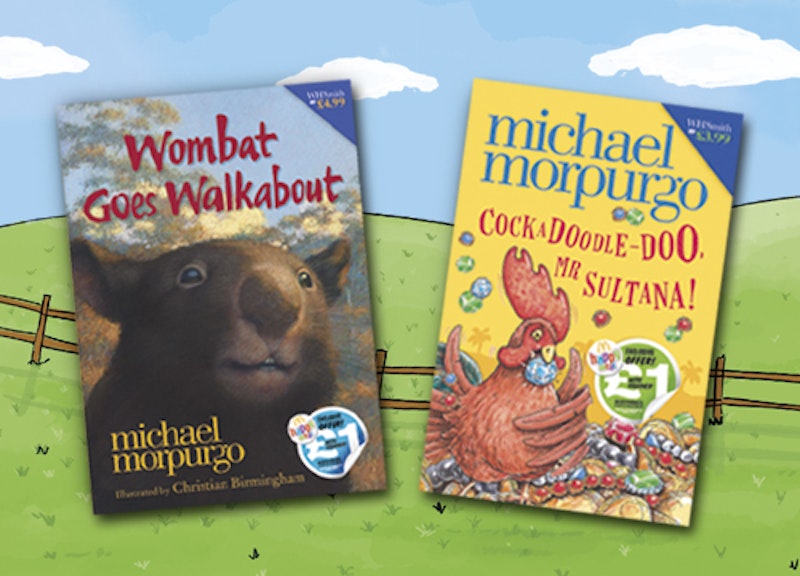 Celebrated children's author Michael Morpurgo—perhaps best known for War Horse, recently adapted by Steven Spielberg into a clunky blockbuster—has found himself at the center of a controversy surrounding a recent deal he struck with McDonald's. For a limited time, Happy Meals in the UK will include one of six books from Morpurgo's Mudpuddle Farm series, presumably replacing whatever shitty plastic choking-hazard horse toy would have normally been left at the bottom of the bag. In all, nine million copies of Morpurgo's books will be given away, and lest you think this is some huge financial boon for Morpurgo, all proceeds will be donated to his Farms for City Children charity, which takes inner-city kids out to the country for a week.

And while it's hard to argue with free books for kids, Charlie Powell, Campaigns Director of the Children's Food Campaign, has found a way:

At a time when we have a childhood obesity epidemic this is clearly an inappropriate marketing strategy. The idea appears to be designed to make fast food more attractive to children, which is not the direction we should be going in.

You have to question whether it is McDonald’s role in society to improve childhood literacy. This seems rather cynical to me. McDonald’s has been criticised in the past for using toys to promote Happy Meals, it seems they have moved to the next most acceptable thing, which is books for children.
Which all makes perfect sense, if you think that free books are some sort of wild draw for kids who aren't already stuffing their faces with Happy Meals. The childhood obesity rates in First World countries like Britain are alarming—nearly a quarter of British children are now obese—but there are other troubling statistics as well: a recent study by the National Literary Trust revealed that almost four million children, that's one out of every three, don't own a book. I don't think it's unreasonable to assume there's a connection between those two statistics: fast food is often the only food for poor children, whose parents are less educated, and generally less interested in reading to their children.

So maybe I'm naive but this doesn't strike me as just some cynical ad campaign—this isn't Big Tobacco using Joe Camel and brightly-colored packaging and candy flavors to entice kids to smoke. And while it could be just a play at some good PR, for an international corporation like McDonald's, what isn't?