Whole Lot of Dumb: Manufacturing and Purchasing Band-Aids for Cars

Adding to the ever-lengthening litany of stupid things that can be done with an automobile. 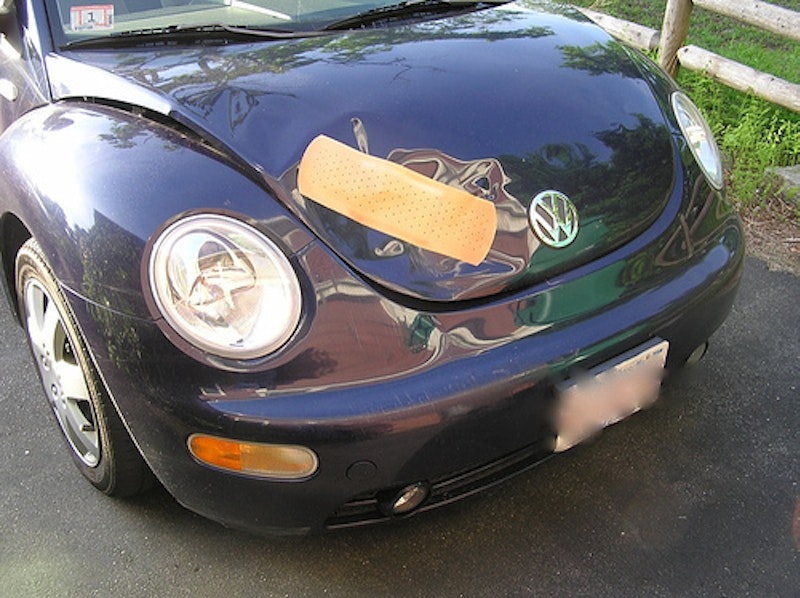 For a lot of people, a minor fender-bender where the other person is at fault is nothing short of a boon: a minor windfall, an out-of-nowhere bonus, God handing over a manila envelope stuffed with small bills. Most of us are constantly short on cash and since a dent, busted door, broken window, or dangling muffler isn't necessarily enough to keep a car off the road, the tendency is to shrug off the damage and blow a wad on dope new speakers. People who think this way generally view automobiles as a way to get from Point A to Point B, not an investment, in other words, or the dangerously young and indifferent. At one time, the few among their ranks with any modicum of vanity had limited decorative options available: one could slap on an asinine bumper sticker, splash on some ill-matching non-automatic paint, break out the duct tape and twine, or spring for bullet-hole appliques.

Today, though, beater owners have a more aesthetically garish option to chose from: they can coddle their bruised, battered gas-guzzlers with ludicrously oversized Band-Aids. They can be had for $6 on Amazon.com, for $5 on Stupid.com, $11 for two on eBay, and for a sliding price scale via wholesalecentral.com if for some reason you decided to buy a bunch of these things and gag-gift everyone in the office. Somehow, this is less defensible than costuming your pet. In practice, the experiential effect is a jarring one: pedestrian self-medicine iconography transmuted, incongruently, to a blue or red sedan or hatchback that is otherwise unclothed, in broad day in a parking lot. When you see one, you find yourself rooted to the spot where you stand, overcome by an admixture of disbelief and a desire to get a long, probing look at the sort of person who would spend good money on a Band-Aid 100 times huger than usual and willingly apply it to something so inextricably associated with his or her personal identity.