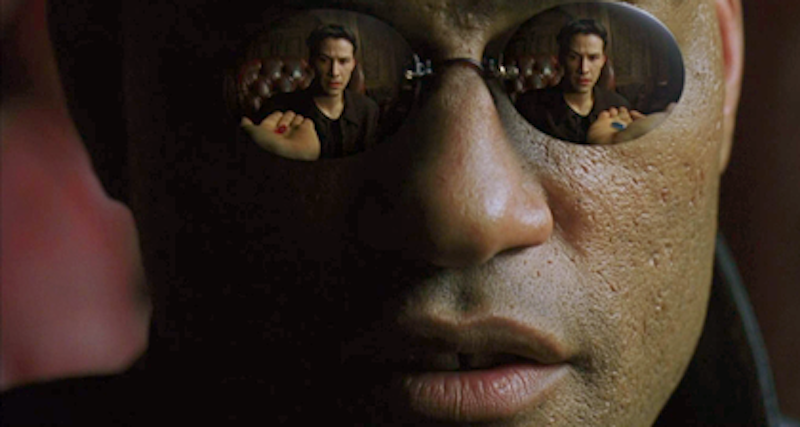 In The Matrix (1999), at the glory hole of consciousness, Morpheus asks Neo to choose between "the blue pill and the red pill," though the film's dramatic phalo-tinted lenses make them appear green and orange, which will remind anyone who has had ever had a cold, besides enlightened homeopathic folk, of our seductive friends NyQuil and DayQuil. With the success of the former, first manufactured as a syrup, Vicks (a subsidiary of Procter & Gamble Co.) launched the latter less effective non-drowsy one.

The problem with DayQuil was that you still felt icky because you were, well, conscious. NyQuil didn't so much relieve your symptoms, but did put you in a coma. When given a choice, humans may prefer complete unconsciousness, even if that means they may wake up covered in slime. In short, people took NyQuil during the day, went to work, and sent some pretty badass emails. If they didn't crash on their way home, they quickly fell asleep, the toaster oven turning things black. Almost a decade-and-a-half after the film, the metaphor Morpheus handed us is actually quite the same.

The low hum of the score is daunting. "You take the blue pill: the story ends, you wake up in your bed and believe whatever you want to believe. You take the red pill: you stay in Wonderland, and I show you how deep the rabbit hole goes." Despite the corny "gamer" jargon and half-baked pothead philosophical meanderings, The Matrix succeeds, somewhat inadvertently, as meta-allegory: the failure of the film's earnestness exposes the very artifice of reality, both inside and outside of the film, it tries to implicate. How does something fake tell you life is?

In comparing the difference between the two, NyQuil contains a heavy sedative (Doxylamine succinate/6.25 mg), replaced by a mere decongestant (Phenylephrine HCl/5 mg) in DayQuil. Having one's sinuses cleared is fine, but the rabbit hole is far better. The mutual ingredient is the cough suppressant (Dextromethorphan HBr/10 mg) that—according to a warning linked to their website—one in 20 teens report abusing (i.e. "Robotripping," an etymology from competitor brand Robitussin, who have more precedent on the cough market). Dextromethorphan is a dissociative hallucinogen that distorts perception and induces feelings of detachment by blocking signals to the mind. Your brain stops noticing how you feel. Getting high is not a child's critique of adulthood; it's man's critique of the universe at large.

If there is a "reality," it's the erratic dance of biochemistry inside the brain. To think we are all but mere mini-fireworks between synapses. The more we understand neuroscience, the less mysterious, personal, existential, and spiritual our tribulations seem. Life may be the hallucination. To think this is very disappointing, being reduced to a simple primate whose every qualm can easily be erased by an over-the-counter sedative. Still, we wake up feeling a little better. We blow a monster out of our nose. If the world looks exactly the way we left it, it probably is. Just don't ask this pessimist if that's a good or bad thing.