Whither the Pocket Square?

The world's least essential accessory is also one of the most fun to wear. 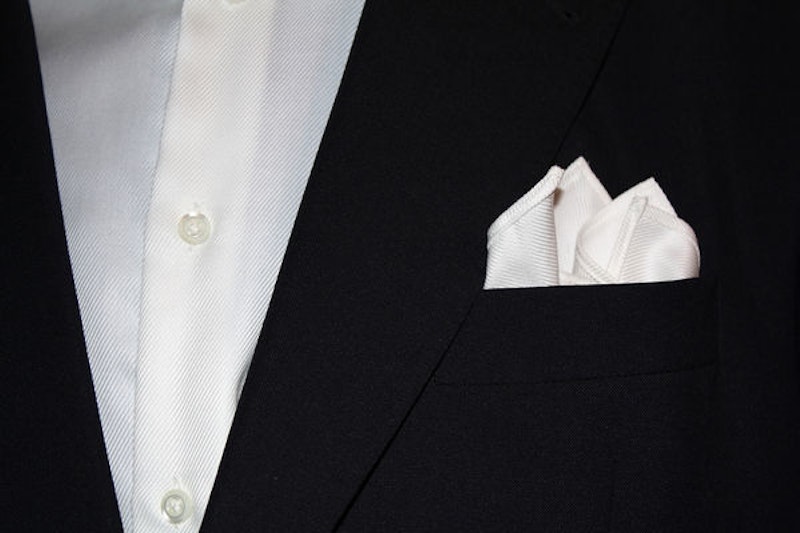 In 1634 in Loudun, France a court of inquisition convicted the curé Urbain Grandier of sorcery and demonancy. The court determined that Grandier had signed a pact with the Devil and caused many of the local Ursuline nuns to become possessed by various demons. The trials, examinations, and demoniac excesses of the nuns went on for almost 10 years, drawing experts, scholars, and tourists from all over Europe. Historian Michel de Certeau draws a connection between the devastation of the European religious wars and the elaborate moral, religious and judicial spectacle of the possessions. France, in a way, worked through its trauma by psychoanalyzing a group of cloistered women and, after a long time, burning a handsome young priest at the stake.

I have been working through my own trauma recently by buying pocket squares. Pocket squares offer some really excellent qualities if you are purchasing them in order to distract yourself from the unrelenting misery and bad news of the world at large: they are generally (but not always) inexpensive, compact, the particular size barely matters, and they come in an amusing variety of colors and patterns.

What does a person do with a pocket square? A pocket square is a piece of fabric (cotton, linen, silk, or sometimes wool) about the size of a handkerchief, or perhaps smaller. Sometimes it is a handkerchief, since originally they were the same thing. Basically you stuff a pocket square in the breast pocket of a suit jacket or sports coat or blazer and there it sits, winking at the world around you and preventing you from filling the pocket with, for instance, pens, or a Blackberry, or several pairs of glasses. Women and men alike may enjoy the subtle delights of the pocket square, though being a fussy popinjay really helps make the whole endeavor seem worthwhile.

The most overbearing pocket square is a precisely ironed and folded swatch of silk stapled to a piece of cardboard; this presents a very crisp and extremely stupid image and is suitable for kitschy 1980s proms filmed for indifferent Hollywood comedies. It corresponds to a clip-on tie and I encourage the reader to avoid it.

Next comes the white linen pocket square, crisply folded into a straight line, placed in the breast pocket so that it peeks shyly forth, like a baby bird. Mad Men's Don Draper often appears with this sort of pocket square, which probably goes a long way towards explaining why they seem to be getting more popular. This does not even look that foppish.

Pocket squares vary widely in quality. At the bottom end rest cheap cotton squares (really handkerchiefs, though the distinction is vague) and Chinese machine-made silk entrees. Better pocket squares have rolled and hand-stitched edges, which gives them a puckered, impudent look that flat machine-sewn edges lack. Frankly I don't see much of a difference, thought more sartorially discerning people than I might find this admission horrifying. If you get to the point where you can discern differences in pocket square quality at all you probably are not taking your fashion advice from Splice Today.

There are two critical choices when it comes time to deploy your pocket square: how shall I fold it, and what color square should I use? These decisions also fall on a spectrum. At the bad end of the scale one finds matching tie and pocket square sets—these are pretty horrible and silly looking, again evoking an unfortunate prom. On the subject of ties: strict and traditional fashion maintains that one would never wear a pocket square without a tie, but the youthful and daring might find this quite a pleasant option (and women can certainly get away with it).

Traditionalists select color by choosing a square that picks up a color in the tie or in the shirt, but doesn't actually match either. This looks coordinated without looking like your mother dressed you or you bought your outfit from the Skymall catalogue. The most British and nonchalant choose pocket squares that seem to correspond in no way with either the tie or the shirt, giving the impression that the wearer looks great completely by accident, as if they had left the square in a jacket weeks ago and thrown it on without a moment's thought. Of course in this case one must select the square with artistic élan, ensuring contrast and interest without making people around you ill.

The fold also demands varying levels of thought. Followers of the British "Oh, where did that come from?" model advocate stuffing the square in the pocket in the morning and refusing to touch it all day. Prince Charles, who some consider a very snappy dresser, often appears with just such a pocket square, but then again he's a member of the royal family and has no one to impress. Some call this method the puff, and you do it by grabbing the square in the middle, gathering up the four corners, and folding the whole thing in half.

Many complicated folds are used; though in general the more time you spend folding your pocket square the worse it will look. One to three points can look quite pleasant; four points, or the various tightly folded shells or steps show great artistry but unfortunately look a little too mannered and fussy—even for pocket squares.

Some like their pocket squares to billow; some keep them almost hidden. Alfred Hitchcock's Secret Agent (1936) showcases great examples of both: Peter Lorre, who was flipped out on morphine and chewing the scenery, sports a grotesque, drooping, Georgia O'Keeffe-esque pocket square, while John Gielgud's remains more prim and repressed. In fact Hitchcock's movies from the 30s practically revolve around pocket squares, and the actors frequently use them to sop up blood and blow their noses. This was before the Great Pocket Square Transition sadly rendered them ornamental.