Is there any other way to be over here? 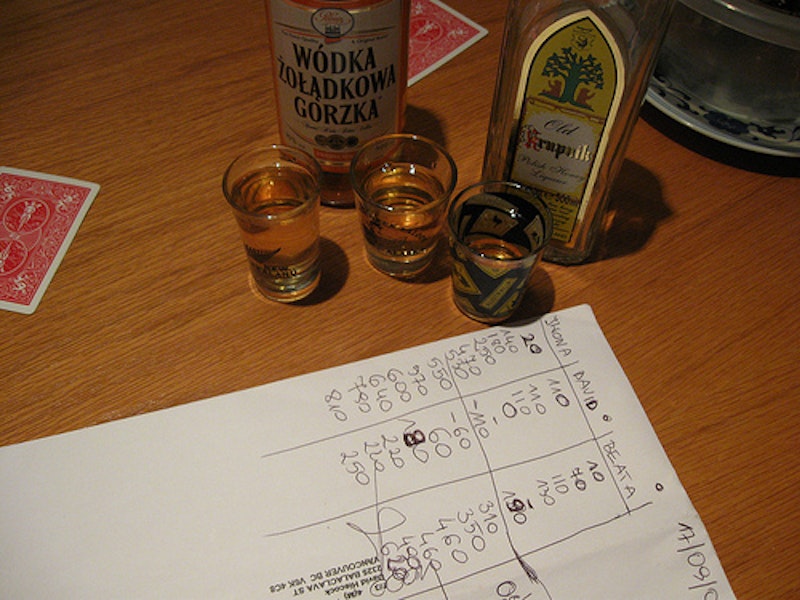 Eastern Europe has more than enough treasures, artistic, historic and cultural, to warrant a visit, but in terms of those merits to which it can claim planet-wide supremacy, the region east of Germany and west of the Steppes puts three things on the list—cold weather, bleak tenements, and alcohol. I've shivered through the first, slept many a night in the second, and consumed enough of the third to kill a Mongol pony.

Not that I herald my recent over-drinking as evidence of some ability on my part; it hardly requires any great talent to find booze over here, or willing companions to swill it. Indeed, the impressive feat would be somehow managing to criss-cross the territory without spending a substantial portion of your travels blind, stinking drunk. Everyone over here has liquor, and they all want to share it. Objections which, in other sections of the globe, might prove acceptable explanations for refusing to drink—''I have already drank a liter of vodka today,'' or, ''It is nine in the morning,'' or, ''I am a Mormon''—here evoke nothing more than curiosity, or even embarrassment, as if you had let slip some irrelevant, overly-personal secret. Then, shrugging, you're poured another shot or offered the communal bottle and your host utters what I have come to discover are three incredibly dangerous words, words which, however ignorant the speaker may be of English generally, he has inevitably mastered: ''A little more.''

In America, we generally divide the day between coffee-drinking time (daylight) and beer-drinking time (after work, in the evening). This distinction is inconceivable in Eastern Europe. All times of the day are beer time, perhaps because coffee tends to come in very small mugs and is quite expensive, whereas beer comes in towering glasses and costs less than water (seriously). In general the population seems only vaguely conscious that any liquid under 40 proof even counts as an intoxicant. "No alcohol for me today thanks, I'm in the throes of a hangover/on the wagon/currently operating a forklift. Just give me a pint can of Tuborg." And this isn't a class thing either; all segments of society seem to believe an omelet goes down best with booze, and in Tallinn you can watch businessmen in three-piece suits down Estonian beer five hours before the sun hits the meridian.

Whether driving this widespread boozing or as a result of it, Eastern European culture seems geared toward consumption of alcohol. To begin with, you can buy alcohol everywhere. Everywhere. Every kiosk, road-side stand and street stall, not to mention any establishment devoted toward serving food. In D.C. it took six months for the Whole Foods that opened up down the block from my apartment to get a license to sell singles; here you can buy grain alcohol from elderly grandmothers sitting on plastic crates beneath traffic lights. Americans also drive a lot more, which does not lend itself to heavy drinking, but people here get everywhere by bus or train. I killed 8 hours from Warsaw to Vilnius with four or five Russians who started drinking in the early morning and didn't much care to stop, squirming in my seat every time one returned to their duffel bag to pull a bottle of rum from its bottomless depths, like a rehab-ready version of Felix the cat.

I never felt like someone who could be strongly influenced by peer pressure, though that's mainly because I never needed any help to make a bad decision. But over here I often find myself working to live up to the standards set by my companions, not wanting to be rude in rejecting an offered intoxicate, and, moreover, not wanting to leave my newfound friends thinking Americans are pussies. I am not the ideal representative of our great nation in this regard; alcohol was never really my drug of choice and I haven't spent much time indulging in the pleasures of straight liquor since my freshman year of college, when I used to drink a handle of vodka and vomit in bushes as a means to impress girls. I feel like I've done my part for the good name of the U.S.A. if I'm not the first person in a group to pass out in their chair, and thus far I've upheld my country's honor, albeit barely.

For all the fun I've had doing irreparable damage to my internal organs, I can't help but feel an occasional twinge of guilt as I plow through whatever local liquor I am forced to try. For me, this is a joke, a rare indulgence I take part in as a curiosity rather than because I really love being drunk. And the same could be said for many of my companions, throwing back vodka on a Tuesday night more for my benefit then out of any passionate desire to urinate during sleep. But the same cannot be said for everyone I've knocked over a row of shots with; I split a bottle of grass vodka with a Belarussian man who told me, ''in America you take anti-depressants. Here we drink.'' Life is hard over here, and the line between casual drinker and desperate alcoholic is a thin one. I daresay my liver will, in time, cast out the cheap poison I've been pumping into it, but judging by the tomato-red noses and vague slurring of half the population, I don't expect many such breaks are afforded people's bodies over here. (Sidenote, it turns out Russians don't normally say 'nazdrovia' when they drink, but they'll do it to be friendly, and to live up to stereotypes from American movies.)

There isn't much I can do to salve the wounds of post-communist Europe, or to improve the lots of my drinking companions. And so I continue from country to country and city to city, drowning the dust of the road with anyone wishing to do the same.