We Got It For Cheap

The allure of 99-cent produce. 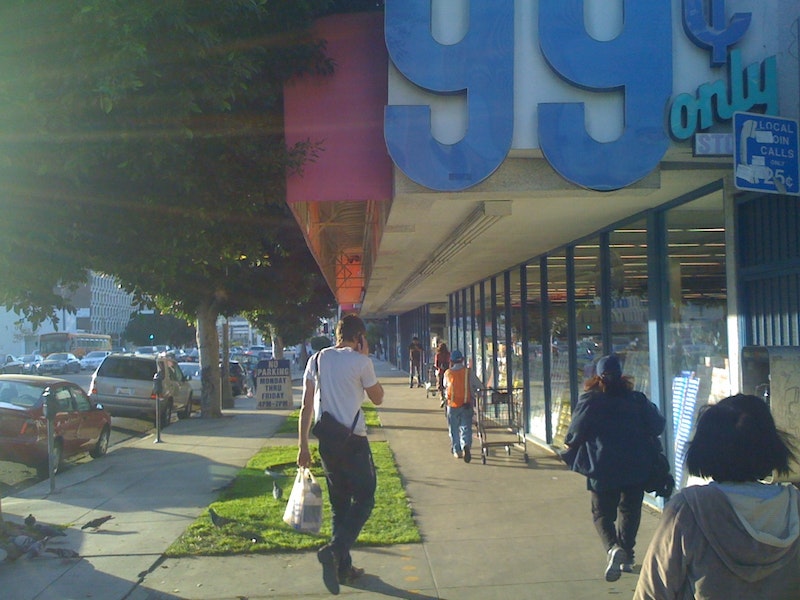 Photo courtesy of the author himself.

On February 7, 2007, Andreas Gursky's 99 Cent II Diptychon became the most expensive photograph ever sold, fetching $3.3 million at auction. Reporters delighted in the irony of this news—the cathedral of high art illuminating the bargain basement of shopping.

True to its price, the photograph is enormous: shoppers wade through a red sea of product labels and ads across two enlarged frames, displayed vertically (creating a Diptychon). Gursky, famous for taming compositions most photographers would consider too busy, captured cleanly the endless repetition that can overwhelm those seeing the 99¢ Only Store for the first time.

And yet, Gursky's focus on the waves of uniformity from the packaging in the snack aisles caused him to overlook the store's most natural and unwieldy department—the produce section.

East Coast readers familiar with the Family Dollar and Dollar Tree chains may have a hard time believing this, but California residents can pick up groceries in their neighborhood dollar store. Now, I'm not talking about freeze-dried, knock-off snack sticks (though these are readily available). I mean produce: Spinach and Romaine hearts, broccoli and snap peas, eggplant and red peppers, cartons of raspberries and Portobello mushrooms, kiwis (six for a dollar) and tiny avocados (three for a dollar). My crowning achievement was a full Dole pineapple, bought stem and all for only 99 cents.

Newcomers, most of them expecting single-ply toilet paper and cheap, plastic toys, tend to approach the groceries with outward hesitation.

In a recent trip to the store, I watched one of these newcomers observe a regular customer casually add a bag of nectarines to her shopping basket. The newcomer, a young woman who moved with the lethargic speed of someone who had been living on Ramen, slowly made her way towards the produce section. She paused, perhaps asking herself the same tough questions that I had on my first visit: Where does all of this food come from? How can it be sold for one third of the price of a supermarket super sale? Is there some kind of fell-off-the-truck hucksterism going on?

At first, everyone wants to know the answers. A good friend of mine, Food Network blogger Eric Kahn Gale, was skeptical when I first introduced him to the store. He told me he was expecting "a lot of crap in there, stuff you have very little interest in buying," but the price slowly won Eric over. His disbelief turned into a nervous sort of joy as he filled his shopping basket, the total only coming to $12.

But the questions remain: how do they sell all that produce for only 99 cents? With all honesty, I can say this: I don't want to know the truth. Chalk it up to this annoying, child-like gullibility I can't seem to shake. Looks too good to be true? Looks pretty good to me. And yet, this time, I feel like I haven't been duped. This time, my confidence is grounded in fact. Kind of.

First, it's a matter of grading. The produce at every supermarket in America has been graded by the USDA. These grades are pretty comprehensive and wide-ranging (the latest proposed rules cover Beet Greens). Right now, I'm reading the1954 document titled "United States Standards for Grades of Carrots with Short Trimmed Tops." It covers firmness, color, leaf-stem quality, and size down to an eighth of an inch. Fascinating.

Chances are, you've never had to think about the grading of your veggies because most all of the food in major grocery chains is graded U.S. No. 1. Stock boys take great pride in their perfect produce pyramids, and a lot of that perfection is down to unblemished uniformity. The buyers charged with choosing inventory simply won't settle for anything less than the highest grade.

So the farmers with completely edible (though not quite so glamorous) Grade 2 vegetables and fruit are left with truckloads of unsellable goods. Their avocados might be a bit smaller, their oranges might have one too many navels, and their potatoes might not be perfectly ovoid. But the only major-market buyer who will consider them is the 99¢ Only Store.

These major-chain supermarket buyers also have to shop for consistency. What happens if your neighborhood grocery store runs out of milk? Or eggs? Each grocery store recruits a vigilant team to ensure that they never have to find out the answer to that question. And yet a trip to the 99¢ Only Store is more of a grab bag; you never know what's going to be in stock. You could come home with pasta, fruit, bread, and milk, though it's best not to plan a recipe around any specific ingredient.

But what if you don't care about recipes? What if you don't care if your carrots aren't a shocking shade of orange? Or if your bell peppers aren't the size of votive candles? Well, then, welcome to the faithful flock of the 99¢ Only Store. You too can focus on the ripe and overlook the spoiled.

So the kiwis may be prime to eat only for a few days after purchase. Or they may not be prime for weeks. Sure, some of the name-brand salad dressing may be three months away from expiration. But, whether bought from a farmer or snuck from a salad bar, lettuce inevitably browns. Potato chips turn stale. I'm willing to make concessions.

But what about those unanswered questions? As my girlfriend reminds me, I'm willfully ignorant because I'm unwillingly poor.

A few months ago, in commemoration of their near-namesake date, 9/9/09, the 99¢ Only Store gave away nine weddings for the low, low price of, yes, 99 cents.

The wedding ceremonies took place in aisle 9 of their Hollywood store on Sunset Blvd. from 8:09 to 9:09 AM. Looking at photos  from the event, the brides look somewhat shocked, all of them standing in a single row, all of them wearing gowns crafted from items sold at the store.

I highly doubt that any of them, in their childhood dreams of marriage, would have pictured exchanging their vows next to eight couples, stuck in a discount store. But I'd also bet that some of their surprise came from a different place, of living in a moment that's far too good to be true.