Class, Both Social and Sartorial, in online men’s fashion communities 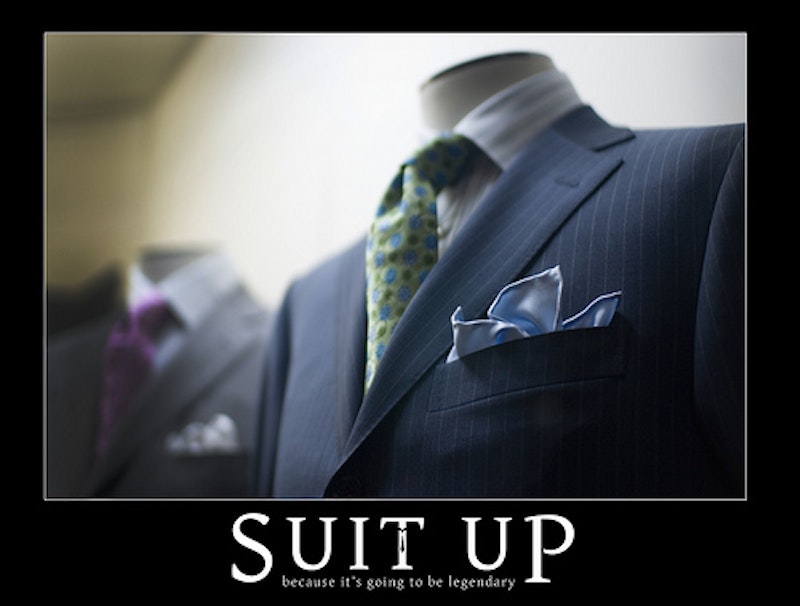 At some point in high school I read Balzac’s Pêre Goriot, mostly in French. Since I was 16 or 17 at the time I missed the point of this densely imagined melodrama of class and wealth. I found Rastignac humorless and dull, Goriot moronic, and the Goriot sisters baffling. I retained the term “arriviste,” meaning roughly social climber, and kept memories of Rastignac exploiting his poor country family, and of Goriot beggaring himself to keep his daughters in gowns.

Rastignac wants to force his way into Parisian society, and for this he needs clothing. He writes, in a letter in which he asks his mother to sell her jewelry:

I am obliged to go into society, and I have not a penny to lay out on clean gloves. I can manage to exist on bread and water, or go without food, if need be, but I cannot do without the tools with which they cultivate the vineyards in this country.

Well over 100 years later, in America, we lay rather less emphasis on clothing. Should you doubt this I urge you to visit a mall. Even in more formal settings sartorial laxity prevails—a recent New York Times article suggested that the current generation of money and power holders views dressing like a slob as a hard-won prerogative of success.

Perhaps because of Mad Men or for more diffuse reasons many American men in their 20s (though certainly not only Americans, nor only the young) are trying to dress sharply and much more formally than their peers. Unsurprisingly the Internet plays a large role in this quest for elegant attire. For the past few months, on and off, I’ve been combing the website Ask Andy About Clothes, one of the leading voices in the movement towards increased dressiness. I learned a great deal about clothing, both its manufacture and its strictures; but it was also interesting to see that talk about clothing (exclusively men’s clothing, by the way) inevitably incorporated discussions of class, culture, self-esteem, and politics.

Andy Gilchrist, the owner of the website, has published an encyclopedia of men’s style. He also provides a number of informative articles on clothing. Yet the meat of the site resides in the forums, areas in which site members discuss clothing, submit pictures of their shoes and carp at the sloppy dress of movie stars and politicians.

The forums divide into contemporary men’s fashion and “trad,” a term that I had first heard to describe furniture but that in this context indicates, roughly, Ivy League or preppy styles that reached their peak on the East Coast in the 1960s. A naïve reader might find it extremely difficult to distinguish contemporary from trad looks, since both emphasize suits, brown shoes, and mostly muted colors. The wildest styles at Ask Andy are certainly sober enough for most Americans to wear to a business meeting or a reasonably irreverent funeral. Everything tends to the conservative—many Ask Andy members make a sharp distinction between style (the art of dressing well) and fashion, which they consider a transient parade of grotesques. Square-toed shoes stand as a particularly reviled example of fashion trumping style.

The sartorialists of Ask Andy rely on rules, though many of them know when and where to break them. Most of these rules have changed very little in the past 60 years. Ask Andy members know rules for color matching, and they distinguish carefully between levels of formality. With shoes, for instance, brogueing (decorative holes, most commonly found in wingtips) denotes informality, ostensibly since the wingtip brogue originated in country shoes worn by unpretentious Scots. Ask Andy has many British members, who seem uniformly knowledgeable in country/city distinctions that may be less relevant in the United States.

Suits, too, receive grades on how formal and how conservative they are. Charcoal gray and navy blue solids receive high marks for somber versatility. Members routinely (but not uniformly) excoriate solid black suits, which they hold to be appropriate only for funerals. Many members treasure tweed suits in a spectrum of murky plaids, though they may be reluctant to wear them within the precincts of a city. Ask Andy also provided me with many of the eternal rules on pocket squares.

Occasionally this reliance on rules becomes reactionary and silly, or so convoluted that it seems more useful for delivering arch insults that guiding men into dressing well. New members often come on the board asking whether particular garments (perhaps shoes) are “formal” enough for office work. Experienced members understand “formal” to mean black tie, and occasionally will endorse this definition with autistic disregard for context, telling naïve young men that perfectly ordinary brown Oxford shoes are informal and inappropriate.

Ask Andy participants don’t equate expense with quality—most of them scorn the costly frivolity of, say, Thom Browne suits. But many of them will cheerfully drop well over $1000 on an Isaia or Oxxford suit, and more than a few of them would consider spending the same amount on a pair of fine shoes. They couple this willingness to spend top dollar with a carefully cultivated aristocratic insouciance—in Ask Andy world you can spend thousands on your clothes, but you must wear them blithely and without undue concern for their well-being.

Certainly Ask Andy members may have elaborate regimes for shining their shoes, and they may select their dry cleaners with fractionally less care than they do their spouses, but the desired result of this intense care and willing expenditure is not the perfection of constant newness. Ask Andy members instead strive for the aura of confidence supposedly exuded by a man who owns $1000 shoes but doesn’t care if they get creased or scuffed because he can afford, and probably already owns, another pair.

Unsurprisingly class enters this roil of money and attitude. A particularly revealing discussion draws a parallel between American suburbia and British country life. Of course the British country life in question was of the P.G. Wodehouse foxhunts and shooting parties variety, a far cry from the sweatpants and khakis of the American exurb. A member from Delaware made his particular opinion on the matter quite clear:

Attempts to adopt the lifestyle of the landed gentry on a mass scale, without the education, training, and wherewithal necessary to lead such a life properly, causes suburbanites to resemble that other medieval rural class, namely peasants.

Ask Andy provides this training, a deep understanding of the “tools with which they cultivate the vineyards,” in Balzac’s phrase. But I’m not entirely certain if knowing the difference between a canvassed and fused suit, or understanding the care and maintenance of cordovan leather, will really catapult a diligent reader over the castle walls and into the company of royalty. It certainly can’t hurt.