The tip vs. the tip jar. 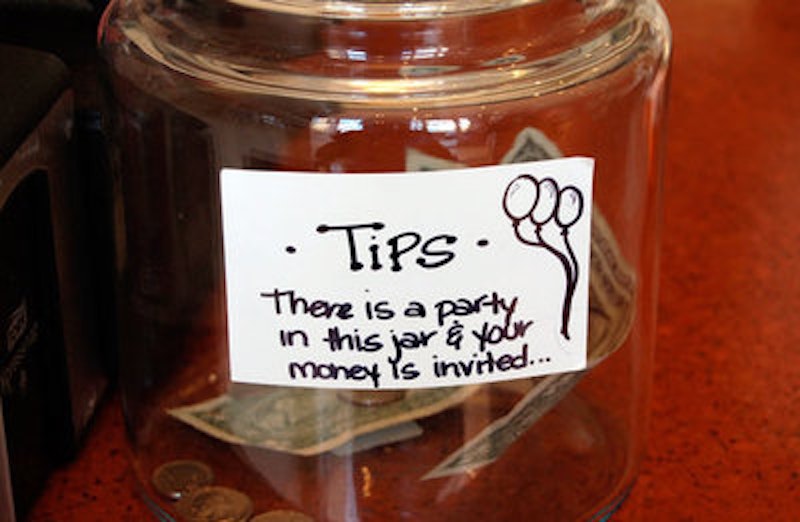 Tipping is easy when you're eating at a restaurant, particularly when you're eating alone: 15-20 percent as a matter of course, maybe a little more if you're flush with funds or the service was exceptional or the server friendly. The purse strings loosen more the further away you are from being a broke, churlish student, old enough to recall and appreciate the indignities of service work and appreciate how prohibitively expensive life is. It's almost a reflex now, I find. But, you know, if the name of the game is curbside service, you get nothing. If I'm not going to tip the dude manning the drive-through at Wendy's, no way I'm breaking off some for the chick ferrying food from the kitchen to the side door at Applebee's; that's a horse of a different color.

Which makes the notion of the tip jar problematic, because the sort of service one receives from those casting a shadow over a tip jar are akin to curbside jockeys, and all of a sudden there seem to be tip jars everywhere food and beverages are sold: Dunkin Donuts, coffee shops of all kinds, mom 'n 'pop confectionery boutiques, you name it. Now, nobody's forward enough to ask customers to stuff the tip jar, but it's there, the elephant keeping the register company. Usually there are a lot of pennies and a smattering of silver, occupying nine percent of the space in the jar, which is typically a large plastic container with the phrase "TIPS FOR EXCEPTIONAL SERVICE" taped on the side.

The tip jar strikes a blow for democracy, to be sure, because fairness says that whatever's collected will be divided up between the staff for that shift. But that collectivism may be a big part of the reason why so many people don't patronize the tip jar: strivers and slackers are rewarded in equal measure, and if three people call in sick, the share of revenue shunted to the slackers increases even if the overall level of service falls as a result. The New York Times recently spilled some ink on this subject, insisting that patrons put more thought into plugging the tip jar than using it as waste receptacle for spare change we don't want to haul around. Most of us probably make small purchases under these circumstances; my default tip jar offering, for a coffee and maybe a donut or pastry, is 50 to 75 cents. A crisp dollar bill, as The New York Times suggests? That's not going to happen, unless I'm tipping a bartender for the lone beer or mixed drink I'm going to consume in an ale house.

Two strikes against the tip jar: first, nobody thanks anybody, ever, for plugging a tip jar with anything; they act like it didn't happen, like they forgot the damn thing was even there or can't see it anymore. Second, tip jars are a bit too reminiscent of the cups beggars use to solicit change from strangers on the street. Half the fun of tipping in a restaurant situation is the reflective thanks the tipper receives, sincere or not. The tip jar can't replicate that experience, and if you try to slip the guy behind the counter at Jamba Juice a dollar bill and he pockets it, onlookers will interpret it as some weird type of bribe or an indication that he's going to meet you out back in five minutes and hand you an eighth. It's a no win for everyone.