This Pod's for You 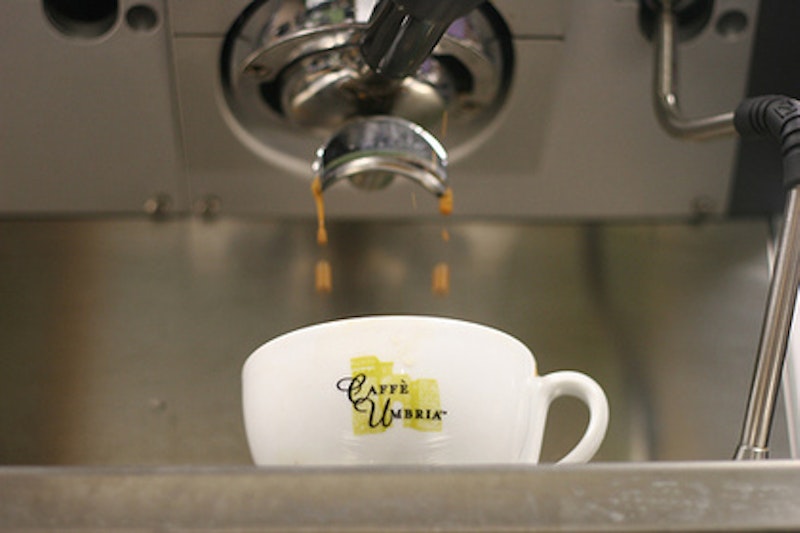 In How to Travel With a Salmon, Italian novelist and intellectual wag Umberto Eco whines about airline coffee, which is served in the American style. This means you get a big old cup full, and that it has a colossal amount of caffeine, far more than a tiny Italian espresso. That’s right, American coffee has more caffeine than espresso—this is hardly shocking, given that you drink about a thimbleful of espresso and, in our increasingly degenerate coffee culture, a venti-sized 16 ounces of American coffee. Both options taste great and provide a sad addictive punctuation to unfunny everyday people throughout our great nation (“Don’t even talk to me until I’ve had my coffee!”). Everyone has a Mr. Coffee, yet few people in the United States make espresso at home.

This may be because making really great espresso at home is next to impossible, but so is getting really great espresso at a restaurant or Starbucks. Espresso uses very high water pressure to extract the oils from precisely ground coffee, and it produces only a tiny bit of aromatic, silky coffee before it turns bitter and thin. In my experience most of the espresso served in restaurants and coffee shops is awful—much too bitter, and much too much volume (and God help you if you order a double). I should say it’s awful compared to really good espresso, although it’s really not bad if you just want something small and bitter (other than, for instance, Lewis Black).

But you should really try some good espresso, and the best way may be to make it at home. You can do this for not a whole lot of money. Unfortunately it’s way easier to do it if you’re willing to spend a truly stupid sum of money; it’s quite unlike fountain pens in that regard. You have a few choices of espresso maker:

Moka Pot
This first, the venerable, iconic stovetop option, is pretty interesting. Moka pots, most famously made by Bialetti, boil water in a bottom chamber, forcing it up through a metal tube at high pressure into the grounds. This makes a drink that lies somewhere between espresso and American coffee, an oily, rich coffee with an intense, strong flavor. It also takes a lot of playing around with the temperature to get a good brew. Too hot and you get burned, metallic tasting coffee, too cold and you get nothing at all. Moka pots are inexpensive, look great on your stove whether you use them or not, and should be cleaned only rarely—you want to build up a layer of oils on the interior to prevent the coffee picking up any taste from the metal. The problem here, as with many coffee brewing options, is that you have to grind the coffee beans yourself. Trying to get a “really good” cup of pre-ground coffee is kind of like buying a Ferrari with an automatic transmission.

A few years ago, when I first began looking into espresso makers, I was shocked that many coffee nuts will spend at least as much on a grinder as they will on their brewing setups (we’re talking multiple thousands on each). Buying a high-end grinder to make coffee in a moka pot also seems pretty dumb, but you might consider a mid-range grinder because you can use it for American coffee as well. Cheap grinders actually chop the coffee beans with a rotating blade—this doesn’t release the oils effectively and ultimately doesn’t do your coffee any favors. Slightly more expensive grinders use burrs to crush the coffee, which provides better grind control and retains more of the coffee’s flavor. You can get crazy with this, investing in ceramic burr grinders that you could use in industrial chemical manufacturing, but you can also get a very acceptable burr grinder for well under $100.

Semi-Automatic
You can grab one of these in Bed, Bath and Beyond. Often they come built in to American coffee makers—steer clear of these, since they will make neither espresso nor American coffee well. A semi-automatic espresso machine has a “portafilter,” a long arm with a metal filter basket on the end. You turn it on, it heats water in an internal boiler, and you then attach the portafilter and press a button (or turn a lever) to express the water through the grounds. The semi in semi-automatic comes from the fact that you decide exactly how much espresso you brew. You release the button or return the lever when you’re done, so if you like a larger, weaker cup you have the option.

You also have the option of using pods, pre-made paper-wrapped pucks of ground and tamped espresso (not to be confused with single-serve coffee pods, used with Keurig or Senseo machines; they’re awful in every way). The espresso Internet community just hates pods, and espresso nerds the world around talk about the stale and awful flavor of pod coffee. I am a pod booster, and have to say that pod espresso tastes vastly better than anything I’ve ever had at Starbucks. It also removes a lot of the user error that ground espresso brings in—you don’t have to tamp the exact right amount of ground coffee into the filter, you don’t have to grind the coffee yourself, and you also don’t have to clean up the sometimes frangible puck of used-up grounds when you’re done. Most semi-automatic espresso machines will allow both pod and ground espresso, so you don’t necessarily need to commit to one. The pod standard is called E.S.E., so you might want to check for compatibility before buying a machine, although I have no idea where you would find a pod-enabled brewer that uses any other system. Starbucks sells pods so they’re readily available—you can also order a bewildering variety of Italian espresso pods online. Surprisingly, Starbucks pods are cheaper, and in my experience make decent espresso (better than what you get fresh-brewed in the store).

Krups makes a visually unexciting but functional semi-auto. Francis Francis makes rather expensive semi-auto machines that evoke the Art Deco Italian look that we Americans sometimes associate with European coffee; their reliability also is, at least in my experience, more Italian than German. I went through three models of the beautiful Francis Francis X6 before I ended up with a slightly less glamorous X3. The X3 has worked perfectly for two years. Sometimes coffee giant Illy Café offers free Francis Francis machines with a coffee subscription—this is usually a nice deal.

Other machines abound, and the Internet will provide you with more information than you could possibly want on your options. Note also that I have not mentioned manual espresso makers. These look like alchemical apparatus or something from David Lynch’s Dune, often come adorned with brass eagles, and cost more than some automobiles. They also require a great deal of skill to use, and may in fact entail a risk of explosion—not for the faint of heart or even the moderately impecunious.

Fully Automatic
These machines, which often look like R2-D2 or a tabletop dishwasher, eliminate the sometimes romantic mucking around with filters and grinds and so on. You simply put beans and water in their respective compartments and push a button—out comes amazing espresso. It’s at exactly the right temperature, it tastes like coffee but is not really bitter, and it has a consistent velvety texture that would make a frotteur shiver with ecstasy and a Mormon renounce his temple garments. My parents own one of these machines and when I visit them I use it constantly. This espresso is so good that I have often found myself pacing my room at four a.m. wondering why I am filled with jittery energy. Could it have anything to do with the 18 tiny cups of espresso I’ve had? It could. You can find these for under $1000 (check Costco), and for well over $1000. Clearly they’re an indulgence of a silly sort, but pushbutton access to excellent coffee seems a little less grotesque than, say, a six-foot flat screen television.