This is Your Father

With news of nopalitos. 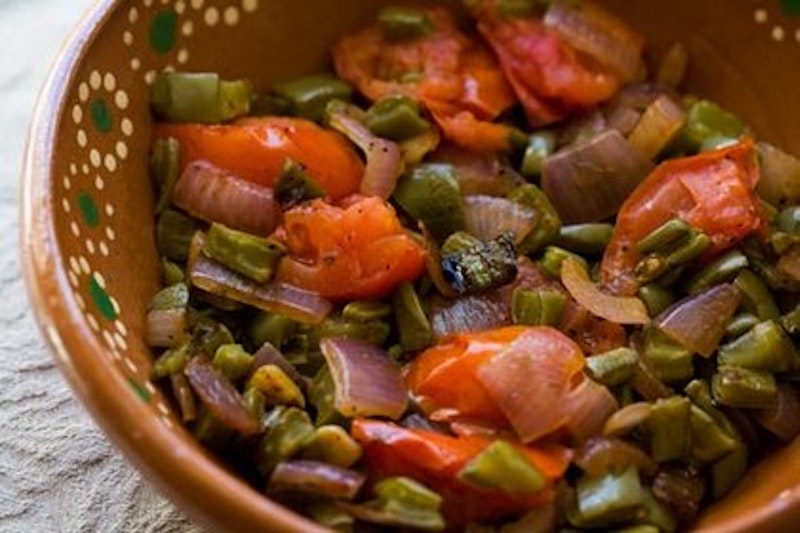 I was watching ESPN and Tony Reali, from the Around the Horn program, had a giant black smudge on his forehead. If I were still a practicing Catholic, I too would’ve had the mark of Ash Wednesday and I’d have something in mind to sacrifice over the next 40 days. But I’m not, and abstinence is a distant thought.

“Bebe?” my dad says as if he isn’t sure he dialed the right number. Like maybe the phone number that I’ve had for the past 20 years may have changed. He says it as if he doesn’t recognize my voice, even though I answered the phone saying, “Hello, this is Conrad.” He says it with a lilt in his voice as if he’s also asking if I know who he is, even though he’s practically the only one that still uses my childhood nickname. And a moment later he says, “This is your father.”

He’ll rarely use my real name. I was the first boy born to the family and was given his name and for a short while he tried calling me Junior, but that didn’t stick. The family legend says that my sister Letty, who is a couple of years older, couldn’t say baby and called me her bebe, and that did stick. Once in a while a cousin, an aunt, or uncle will still call me Bebe, but for the most part it’s just my dad that can’t seem to call me Conrad.

I’m afraid he’s calling to tell me about someone who died, and I brace myself. My Uncle Bob has quit his dialysis treatments or it could be my Uncle Memo who, because of Alzheimer’s, has become a virtual ghost, or it could be his younger brother, Uncle Joe, who’s been bed-ridden for the past couple of years from a stroke. That’s the old guard that I think of first.

My eyes drift up to a still life picture on my living room wall of two golden apples that my mother drew. As if he senses my apprehension, he answers, “No, I was just calling because La Morenita has nopalitos again.”

Nopalitos, little cactus, are a simple peasant food and the meal that he spoke of on a menu actually would be called tortas de camaron, which are shrimp flakes and egg batter fried into a kind of pancake and then covered in diced cactus cooked in a tomato sauce with onions and garlic. It’s a traditional Mexican dish that fits with this time of year and avoidance of meat. I always believed that there was some significance with the needles from cactus and the crown of thorns that Christ bore, but I don’t know where I got that.

I tell him that I’ll pick him up at his little studio apartment around seven p.m. and he gives me a hard time about not wanting to eat late. “Yeah, okay,” he finally says. “Just give me a call when you’re leaving.” I don’t say otherwise, but I’ll just call him on his building’s phone when I’m downstairs.

Tortas de camaron will be temporarily added to menus from Ash Wednesday until Easter and this will mark the fifth year that my father and I will partake in a weekly ritual while they last. It’s a meal served with refried beans, rice, and tortillas. It’s comfort food and prepared with the same sauce that mom used. We’ve both decided that the sauce at La Morenita comes right out of a can of Las Palmas and is the same one that mom used for her enchiladas, and the cactus we’re pretty sure isn’t fresh cut either. It’s probably straight out of a jar of Dona Maria, drained and washed and put in a pot with the sauce, but that doesn’t take anything away from it. I’ll always have a champurrado to drink, and dad will have coffee with cream and Sweet ‘n’ Low. Together the bill will come to under $20 that my dad will pay and I’ll get the tip.

In my horrible Spanish I order my dinner and invariably am asked in English by the waitress, “Do you want corn or flour tortillas?” And I think maize, but answer, like the pendejo that I am, “maze.” The waitress brings over tortilla chips and two different kinds of salsa. I ask the old man whether or not this place makes their own chips or if they just keep them by a heat lamp, which would account for them being warm to the touch. One of us comments, as always, on the salsa being hot and salty. Today there’s also a bottle of hot sauce that still has the plastic seal on it. My dad wonders out loud if this is just for us to look at or if we can have some. It takes a little work, but I manage to peel the plastic off, open the bottle and sprinkle a few drops on a chip.

There was a time that I felt an urgent need for us to really talk. I wanted to know if it was as hard for him to talk to his father as it was for us. I wanted to know if there was anything he wanted to know about me. Anything he wanted me to know about himself. I wanted to know how it was for him finding his wife of over 30 years dead. Did an ambulance manage to make it up the tricky driveway? Or did it park out in the street and have to roll mom down to it on a gurney? Was he still mad at me for walking away from the employment line at the Southern Pacific Railroad, or for wrecking his car that time? And before I went to Alaska, when we had that fight and I had my hands around his throat, what did he see in my eyes?

If not for the nopalitos, all we do together is watch the occasional boxing match or ballgame. Part of the problem is that he mumbles and has an accent so I can’t understand him. He swallows his words and I have to ask him to repeat himself over and over again to the point that he gets annoyed with me. So I usually just make general acknowledgements that might fit anything he’s saying.

One time, years earlier at a Dodgers game, I felt inspired so I said, “Dad, all my life people ask me how I got my name and I tell them that I’m named after you, and ‘cause our name is not a typical Mexican name, I was wondering why Grandma and Granddad named you Conrad.”

There was some stuff that I knew already about our name, but not this. I didn’t tell him that I had looked up some information about a couple of saints named Conrad. One was a German bishop who drank from a chalice during a mass knowing that a spider had fallen into the wine, and at the time it was believed that they were all poisonous. So pious and respectful of the sacrament was the Bishop that he drank anyway, and now the guy is a Saint. I didn’t tell him about another St. Conrad who is the patron saint of hernia sufferers or that the etymology of our name means “bold counsel.”

Dad scooped some salsa onto a chip, says I don’t know.

La Morenita is a small family run place in a little strip mall. We sit in one of the red leather upholstered booths facing a wide screen plasma TV tuned to a Mexican equivalent of VH1. The waitress brings our plates and the portions seem small after all this anticipation.

“I know, remember how big they were that time last year?” I say, knowing damned well that he does. He could hardly finish half his plate that time and took enough home with in a Styrofoam container for lunch the following day.

Last year on Easter, on the final day of the season, we showed up for our weekly ritual and were told that they had just run out of nopalitos right before we got there. It was early too, not much after six p.m., but that was it—no more nopalitos till next year. I remember thinking that the old man and I would never have another plate of nopalitos ever again. He’d be turning 82 and another year is a long time to wait.

But he made it. He hung in despite the plumbing job they did on his arteries and the complications and hospitalization. He was back to his Tai Chi classes at the Y and he told me the water aerobics class applauded him when he showed up the other day.

When the check comes I leave $3 for the tip. “That much?” he says. “Yeah, maybe they’ll give us a bigger portion next time.”