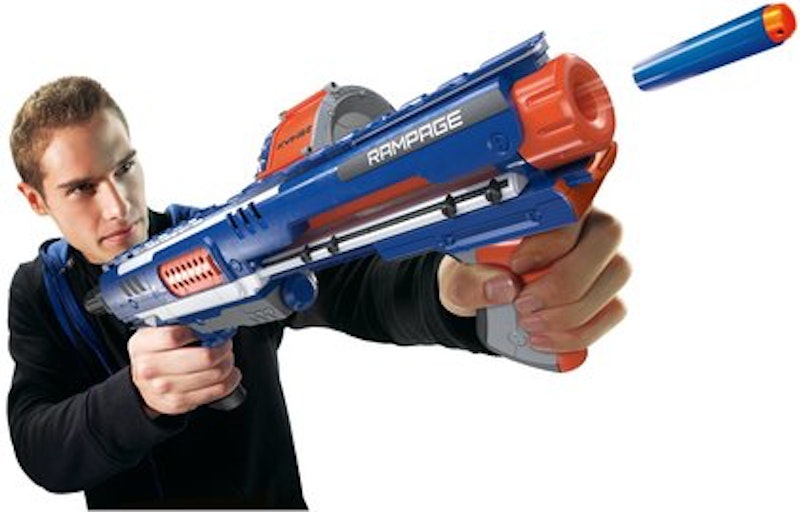 After three girls, and closets full of Barbies and Polly Pockets and Groovy Girls, my fourth kid was a boy. I’m enough of a hippie mom that I used to say I would never let my son play with guns, even toy guns. And no bulldozers, because I’m a passionate historic preservationist who hates the idea of teaching boys to tear things down. I bought him recycling trucks, Matchbox cars, a fire engine.

It wasn’t until last year, at age seven, that he asked (Santa) for a Nerf gun. He’d picked out a cap gun as a treat at the dollar store one day, and it didn’t even cross my mind that this was playing with guns. Growing up with brothers who played with cap guns (cowboy belts, Star Wars light sabers, etc.) over the years, I had never thought of toy guns as potentially a violent toy.

But the Sandy Hook Elementary School shootings took place two weeks before Christmas, while I had the Nerf gun he’d asked for already wrapped. My brother, a captain in the Army and two-time combat veteran of the Iraqi war, had also told me he’d bought my son another huge “semi-automatic” Nerf gun so they could play together.

Although I didn’t feel great about it, I watched as my son opened the guns, loved them, played with them, squealed and hid and ran. I winced; the name of the gun was the Rampage. Foam Nerf bullets rained down on my house. There is one everywhere I look. A bucket in the kitchen is the central collection spot for stray Nerf bullets.

Last week in The New York Times, I read an article called “Not Always Fun and Games.” It featured photos of Nerf guns, including the one my son plays with all the time. I cringed. In the article, a mother who lives 10 miles from Newtown, CT, who has never even allowed water guns in her house, said, “It’s dangerous to separate guns from what they actually do, which is kill things. If a child has grown up comfortable around guns, and has experienced picking up a gun and shooting it, then they will have that muscle memory. And it will be easier for them to shoot a real gun, if they find one.”

This gave me the chills, and reinforced the guilt I already had. Water guns? My kids always play with water guns in our pool.

Another mother in the article forced her kid to sell his violent shooting games after Newtown. This I could see. My son is not allowed to play video games where people get shot. My teen daughters were allowed to play zombie killing games, because for some reason I don’t feel as bad if there are zombies getting killed.

But the mom who made her son sell his games had also let him play with Nerf guns, saying, “Playing with a plastic Nerf gun didn’t turn Timothy into a violent person any more than me playing with a cap gun turned me into a mass murderer.”

The education expert in the article was quoted as suggesting parents use “moderation and supervision.”

“I don’t think withholding a toy gun from a child is necessarily the answer,” he said. “It’s one possible answer. But they are still going to want to make guns from sticks and slices of cheese and anything else they can hold in their hands.”

I watch my little brother and son chase each other around the house, laughing as the foam bullets fly. They’re having a completely fun time; there is definitely no violent intent here. And was it the “muscle memory” from cap gun “fights” that kept my brother alive when he was being shot at in Iraq? I don’t know; the thought seems odd.

Will taking away water guns and paintball games and laser tag stop future violent school shootings? I don’t know that either. Somehow, I don’t think so. Though I will say the Nerf company would be smart to come up with less violent names for their toys. Because, I remind myself, that is what they are. Toys.

I have to honestly believe that in shootings with real guns, there is a predisposition to violence; a reason—some combination of psychological, environmental, biological factors. And while no parent can be truly sure if their child has a deadly combination of those elements, I have to hope that my son does not.

So I keep picking up the Nerf bullets, and putting them in the bucket.