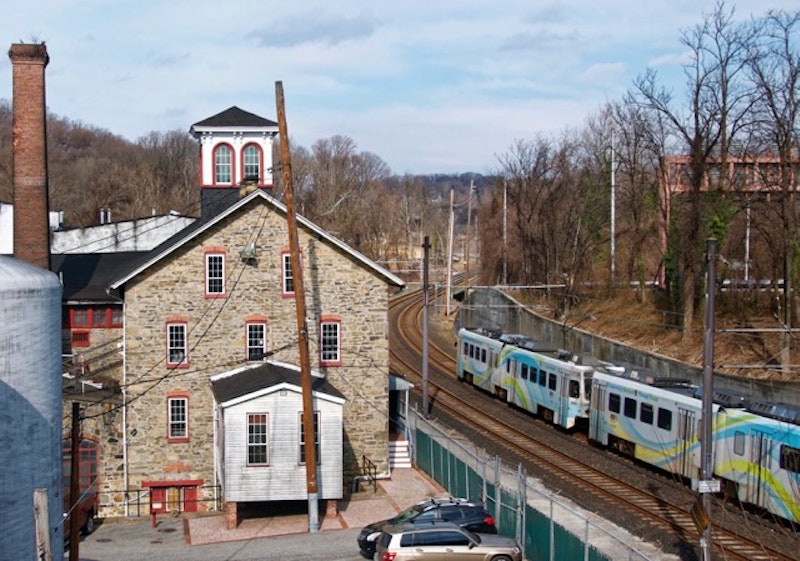 I was having a happy hour Manhattan at my local—Baltimore’s Blue Pit BBQ and Whiskey Bar—when I spied something that almost made me choke on the Luxardo cherry. There, amongst the more than 100 bottles of bourbon, rye, and other whiskies, was one labeled Melvale Rye.

Why the reaction? The cupola-topped stone building above was once at the heart of the bustling Melvale Distillery—one of the state’s largest spirit makers cranking out Melvale Pure Rye to a thirsty nation. It’s also located less than a mile from my house. But business has long soured over that way. Literally. Since Prohibition it’s been a vinegar works, pumping out liquid bound for your salad dressing, not your old-fashioned. Had the stone edifice secretly gone back into the booze business?

Seems not, as the bartender handed me the bottle which indicated that New Liberty Distilling in Philadelphia was behind the whiskey. The label sports an historic engraving of the stone building amidst a steaming whiskey works words and the words “Melvale Rye is born of the highest tides of the Northern Chesapeake.” There was more florid prose and then the kicker: “Distilled in IN.”

All I could think then was, holy shit, Chesapeake high tides now reach Lawrenceburg, Indiana—30 miles west of Cincinnati!

You see, Melvale is MGP juice. Indiana’s MGP Ingredients, Inc., for those who don’t know, is an enormous, publically traded distilling and barrel-aging juggernaut producing a full line of commodity whiskies sold to others—rye, bourbons, corn, and malt—along with what they call “food grade industrial” alcohol. And there’s no shame in their game. They know what they’re doing and they do a swell job of it. Hoosier hooch ends up in dozens and dozens of other people’s bottles, including both Bulleit rye and Dickel rye. Baltimore’s Sagamore Spirit is bottling MGP rye while waiting for its downtown distillery to be completed and the homegrown whiskey to start aging out.

I’m not revisiting the dust-up of a few years back when the concept of whiskey-sourcing first hit mainstream media with a flurry of ominous headlines asking, “Is your craft whiskey really what you think it is?” Outed were some so-called craft distillers who were little more than crafty marketers sourcing much if not all of their contents from MGP or big Canadian distillers. Iowa’s Templeton Rye settled multiple class action suits because folks paid dearly for what they assumed was a small-batch whisky made in small-town Iowa using a pre-Prohibition recipe scrawled on a scrap of paper. But it was largely an off-the-shelf MGP whiskey delivered to Iowa from Indiana by tractor-trailer. These days, the feds are more uniformly enforcing labeling laws requiring whiskey bottles to state what state their contents where distilled in when it differs from the brand’s home address.

What New Liberty doing is more along the lines of cocktail glass carpetbagging. And sloppily, at that. Their website says the Melvale Distillery “was located in the Jones Falls section of Baltimore, on Cold Spring Road.”  Hmmm… since the Jones flows for more than five miles through Baltimore, where exactly is its “section?” And it’s Cold Spring Lane, not Road. But this is nitpicking. At least Melvale is a rye, which is what the state was famous for. Maryland’s rich distilling history is older than Kentucky’s and almost all of it revolves around rye whiskey. Which makes it odd that rounding out New Liberty’s “Maryland Heritage” series of offerings is Maryland Club straight bourbon and Melky Miller, a corn whiskey.

"It's sad to see Maryland's distilling history appropriated as a marketing gimmick,” Max Lents, co-founder of the Baltimore Whiskey Company, wrote me in an email. (His outfit makes rye and other spirits just down the Jones Falls from the Melvale site; their oldest barrels of rye just turned one). “I don't know what a straight bourbon has to do with Maryland Club Rye, and I don't know what a corn whiskey has to do with Melky Miller Rye.”

I’ll answer that: nothing. They have nothing to do with those historic brands of rye whiskey. I’m not aware of any substantial or noteworthy bourbon production here, so when you read “Authentic” and “Classic Maryland style” on the Maryland Club bourbon bottle, know that it’s hornswoggle.

Also exercised by it all is Jamie Windon, co-founder of Lyon Distilling in the Eastern Shore town of St. Michaels, where they make rums and whiskies. She’s also president of the Maryland Distillers Guild, and this PA incursion doesn’t sit well. “It’s my personal belief that in order to pay homage to the heritage of a region or spirit, you need to do more than just slap a label on a bottle,” she says. “The recipe should be recreated as accurately as possible, ideally from scratch, in the way it was originally intended—otherwise, why not simply create something entirely new?”

Here’s the thing: the rye is pretty tasty—a high-barley mash bill brings in a butter-cream sweetness with rye spice notes in the finish. I’m just not sure the two-year old rye is worth $38, as I’ve seen bottles priced in stores. As there is little true Maryland rye on shelves as yet, for that cash—and if you’re going to buy big-maker booze anyway—you could get Heaven Hill’s four-year-old, 100-proof Rittenhouse rye and have more than enough leftover for a sixer of Maryland craft brew.

Who’s paying craft prices for commodity whiskey? I’m envisioning super-premium vodka drinkers—god knows they’re a gullible lot—wandering over to the brown goods aisle because whiskey is, like, so cool now.