The Wretched Drive Back North

In the convulsing cab of a Budget diesel cab rental truck, no one can hear you scream. 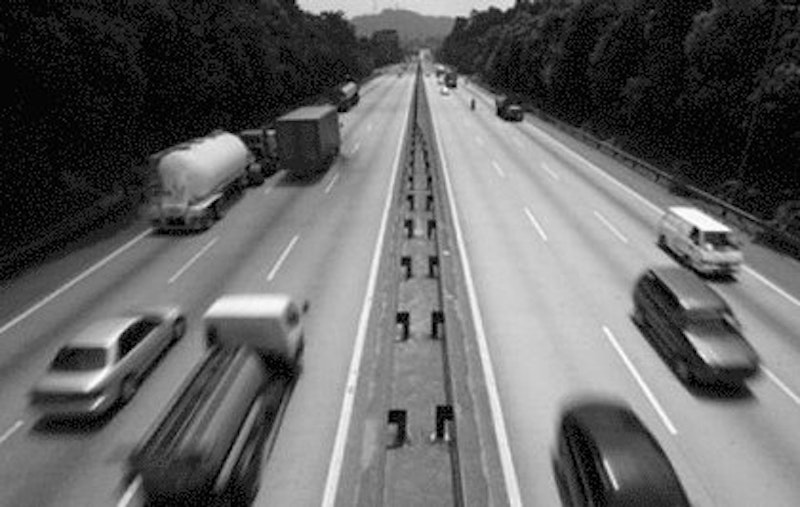 You haven't travelled cross-country until you've travelled cross-country in a Mack Jr.-size truck hauling thousands of pounds, suffering from irritable bowel syndrome, herking and jerking and heaving and creaking and threatening to shake itself to pieces at any moment. The rattling and vibrations have one benefit, though: they'll distract you from a rancid cab that probably hasn't been de-loused since the second Clinton administration. No, make that three benefits: all the hurly-burly helps dull the monotony of long-distance road travel and makes forget that you're moving away from a state you've really come to love, forever.​

The romance of the highway, the open road, you say? No: zero romance. Romance is comfort; romance is ease. A casual sojourn unspooling, gradually, with lazily sketched stops to soak up the local color, score some keepsakes, load up the ‘ol SIM card—that is the loose, unhurried romance of wanderlust. On a two-day, 1600-mile run from Round Rock, Texas up to Lewisburg, Pennsylvania in a Budget asphalt buster, there is no romance to be found. Rather, everything is crude and transactional: fuel breaks quick and wholly functional (up and down a pair of diamond-holed steel steps that you'll gouge yourself on, later), consumption of fast-food staples largely joyless, emergences from and returns to the cab uncomfortable in some elemental way.

Every strip in every town is basically identical. Thunderstorms crash intermittently, retarding progress. Ascents through the mountains of Virginia register as dubious in a full-system collapse kind of way until they just don't anymore and we wondered why we ever worried. There is none of the wild, frontier charge of the trip South, three years before, when everything was uncertain and ripe with possibility: everyone knows what to expect, more or less, and we're down a passenger this time. So it's melancholy, this trip: a formality. The signs are unfamiliar but less interesting, and the cab jostles so violently that iPhone photography is a bad joke.

You find that you have no desire to email anyone about anything whatsoever; this is interesting only in the sense that a) it feels less like a syndrome than a gearshift and b) you're not especially sad about it.

Maybe everyone you've ever loved and cared for is dead. Maybe they were never even alive. Anything seems likely, even this journey turning into some sort of Twilight Zone Mobius-strip loop where we're leaving Arkansas and entering Tennessee every day, day after day, at about the same time, and experiencing the same wasted sense of elation that comes with hitting a landmark that seems to symbolize something important.

What's the word? Ah, got it. The anonymity of this particular voyage—north through Texas, into Arkansas, then across Tennessee, then across Virginia and into Maryland for just a smidge, then a haul into the paunch of Pennsylvania—is what's humbling about it, because you sense you could be anywhere, really, staring dead-eyed through a grimy cab window while thumbing through iPod tracks you really don't want to listen to and feeling your innards vibrate to Jello and grasping, finally, why long-haul truckers loathe drivers who aren't other long-haul truckers so much: conventional drivers have the freedom to drive furtively and carelessly, to weave and bob and generally just dick around behind the wheel. It's the difference between being a mammoth and a baby gazelle.

The hotels are a mixed bag, which is fine because you're turning in way late and being jerked awake way early, plus you're sore everywhere and never actually sleep. La Quinta (first night) keeps it classy, impeccable. Motel 6 (second night), meanwhile, is a repugnant sty, just a pit, a perfect complement to the truck cab you just wrenched yourself out of earlier; your wife caught sight of some something unspeakable behind the nightstand and wouldn't say what it was and you couldn't bring yourself to look. Many showers later you can still feel the stench of the place, its full-bodied retch and skank.

Many days later, you remain shrouded in the existential emptiness of that trip: nothing feels real or distinct, even encounters with friends and family or the act of moving your worldly possessions into a too-small house or telecommuting to the site where you used to work in person not long before, or even chasing a soccer ball with your son over a sprawling, undulating yard, or sawing away at the young, lithe boughs of a bush your father-in-law wants gone. "It's a precious thing we lost," the Microphones' Phil Elverum once sang, but damned if I know quite what it is. Something is off.