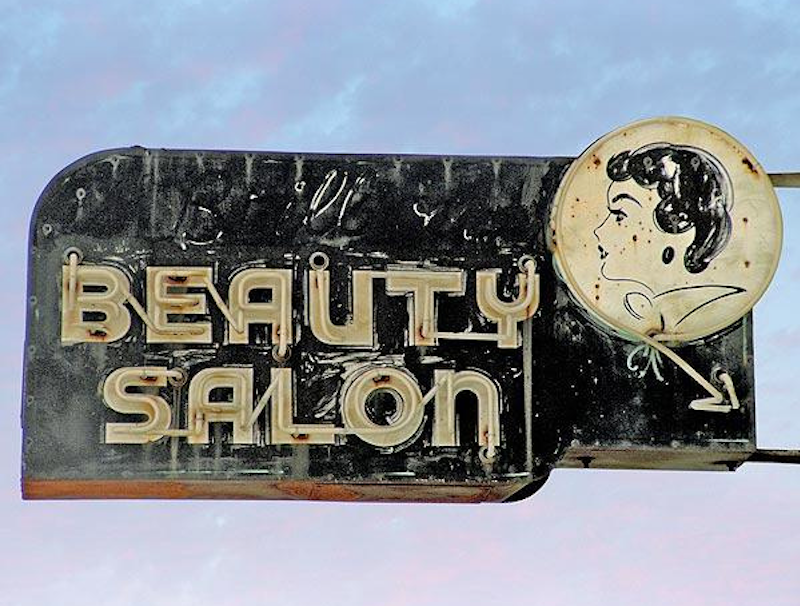 Sometimes, once you first take notice of a trend or commonality, it becomes impossible not to see it. For instance, becoming a professional proofreader transformed the formerly diverting act of reading advertising copy, websites, and newspapers into a slog. All of a sudden, grammatical and typographic errors were inescapable and present at every turn, from botched clauses to blown tenses to misplaced punctuation. Work became life; life became work.

These days what I see are road signs, or more precisely, things that used to be road signs: road sign frames. There was one just over the state line coming into Texas from Arkansas that locusts or an errant holocaust must have set upon. There was another one down in Round Rock, just off US 79, a blue-and-gray brute flying a flag for what had been a complex of doctors' offices and shops before it stood mute, empty, fenced.

After that I found them everywhere I looked: badly faded, blank, cracked, meteorologically peeled, split in half, or simply empty, as if God had poked the plastic or glass casings out with a finger or some bored hicks turned their rifles upon them. Some came filament-equipped, designed to beckon to passing motorists after dark; others were less functional, intended as territory markers or sorts.

Eventually the compulsion to begin recording these signs photographically overtook the revulsion that came bundled with my comprehension of them: the interpretation of shambled obsolescence as an inevitable precursor to every bright and shiny new shopping center or doctor's office erected as a sign of cultural continuity and self-belief. Think of it as comparing an expiring octogenarian to a squirming newborn.

The world, naturally, is studded with dead businesses that nobody bothered to bulldoze or re-fab or turn into parking lots. They're eyesores, sure, but life is messy and imperfect, and behind every orphaned, shuttered lot is likely a lien, a few sad stories, a ton of red tape, a dead road sign that's slightly bent, peeling paint, pocked with shotgun pellets.

What's worrisome, what makes me fear more for the future, are those instances where a dead road sign is affixed to a business that is clearly alive and taking in income, yet the owners have somehow arrived at the conclusion that exterior maintenance and upkeep are ultimately unimportant. There's hubris in this line of thinking, or ignorance, the belief maybe that a phone book entry or rudimentary website or having the market cornered on some service allows one to sidestep the most basic tenets of business etiquette. Their dead road signs will very likely advertise dead businesses soon enough.