Party all the time! 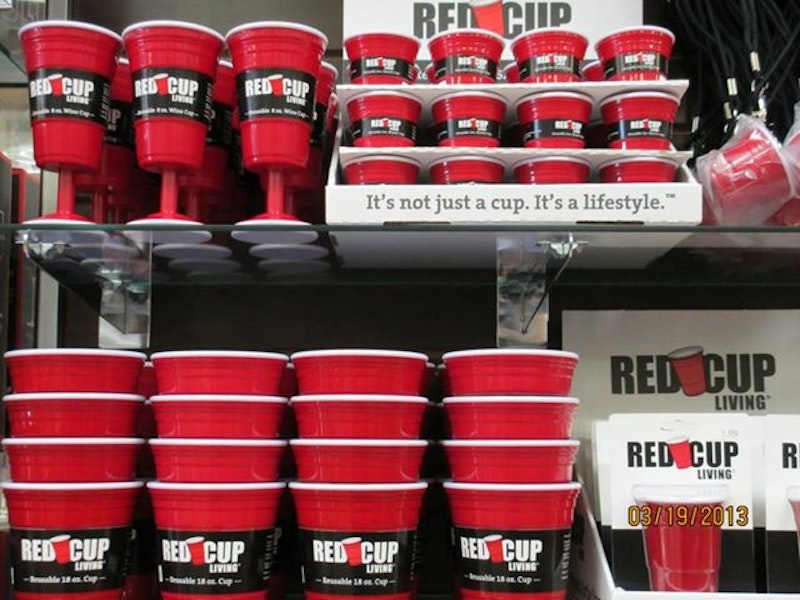 Bed Bath & Beyond should really be renamed "As Seen On TV," since a good quarter of the merchandise on offer bears that tag already. If you haven't seen actually seen any of this junk between commercial breaks that probably means you're living the right way: pat yourself on the back. Cheers!

Last weekend, on a trip to Bed Bath & Beyond, we happened upon the Red Cup Living phenomenon, which seemed to consist entirely of durable versions of the classic red plastic Solo cup, plus goblet versions, plus a small mountain of little shot-glass sized iterations, piled high on one side of an aisle display.

In that display, I caught a fleeting glimpse of everything I loathed about college life: keg parties deep in the woods, beer-pong/Quarters marathons, smirking douchebag frat brothers, impromptu wet bars. Red Cup Living registers as a lame attempt to normalize and/or romanticize the imagined abdication of adult responsibility, as if to bronze youthful idiocy and mount it on one's mantle alongside Father's urn of ashes.

"It's not a cup, it's a lifestyle," insists the Red Cup Living web site, a cornucopia of slickly designed self-justification that comes equipped with a well-meaning manifesto that inadvertently reps for the block party as a social contract, a blog that hasn't been updated since March, and a logo that incorporates the iconic red cup. There is a shot-glass sized version you can buy that you can wear like a necklace, as if it were a whistle, and a coffee mug version. There are also stickers.

There is a t-shirt flaunting the logo, as well, in case you're inclined to explain to total strangers, on the street, why you're modeling a Red Cup Living t-shirt. Inevitably this will require, on your part, a broader explication of the Red Cup Living bylaws, ethos, moral philosophy, and stance on international nuclear disarmament. You may feel slightly foolish, as though you were attempting to sell the MC Escher poster from your freshman dorm to a stranger or talk your philosophy professor bestie into buying into the logic of an Ayn Rand novel. Which, really, you kind of would be.