The Eight Commandments of Leftovers 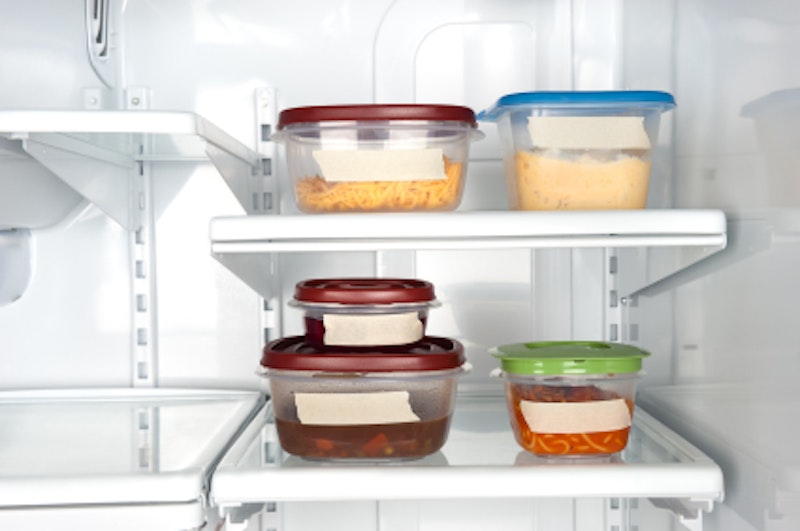 In my family, I hold a dubious and perhaps ignoble position: I’m the consumer of leftovers homemade and otherwise. More accurately, no one else can be bothered to eat them. As a result, when leftovers are not consumed, baleful eyes are inevitably cast my way, as it is expected or anticipated that, somehow, my appetite will gravitate to any and all leftovers, familiar or alien, as a simple matter of course. My dinner or breakfast plate occasionally becomes the repository for morsels or small portions that the family cannot or will not finish. By now, I've pretty much accepted this as a cross I must bear. What all of this means is that I'm really, really well-versed in leftovers and the etiquette of leftovers, and so I now emerge from the distant mountaintop with these commandments etched on stone tablets to share my wisdom with those of you for whom it isn't already instinct.

Do not put your home leftovers on a plate and seal it with cling wrap. Do not store your fast food or fine dining leftovers in whatever ungainly Styrofoam or plastic monstrosity your server cursed you with. Do not set your food in the fridge on a plate or in a bowl with no covering; that's just idiotic. Look: God gave man Tupperware for a reason, and He gave you the ability to see, think, and transfer that roast duck haunch and wild rice into a size-appropriate Tupperware container that will ensure the longevity of your meal until whenever you. Got a ton of leftovers? Break that grub down in small containers instead of a single huge batch that eats up a ton of space and causes the people who live with you to silently resent you.

Following along from the first commandment, in the event that your leftovers are diversified, have the sense to segregate stuff by using compartmentalized Tupperware containers. Don't let portions of different provenances blend together; sopping wet collard greens and mashed potatoes and turkey don't belong mashed together and intermingled anywhere other than in your stomach. That shit is gross to begin with, and after a day or two, it'll be damned near inedible.

There's no scientific rationale behind this commandment; it's borne of personal trial and error, and honestly, the line can be stretched to seven days in desperate circumstances. Basically it comes down to this: if it's been sitting in the fridge for more than five days, throw it away. Obviously, you don't want to run the risk of getting sick or getting somebody else sick with food that's gone bad, but, look, if five days have gone by and you haven't eaten whatever leftovers you held on to, you're clearly not that hungry to eat it, are you? Hey, you had your chance; you blew it.

This is a corollary to the third commandment that applies to extremely perishable foods like omelets and Chinese food. If you're not going to revisit these meals within a day or two, throw them away. They stink up a fridge or a small house pretty quickly, too.

V. Find The Leftovers a Home

Before you box up leftovers, voice that most important of concerns: who’s going to eat them? Try to nail down some particular people and times, because by doing so you're finding homes for these meals and avoiding the disgusting future work of disposing of rotten cake or decomposing vegetable matter in a trash receptacle or garbage disposal or whatever.

VI. Find The Leftovers a Home Outside of Your Home

So: you've got a military-sized quantity of grub that no one wants to be bothered with. Who, other than people who live with you, is going to eat all of it? If you're like most people, you probably don't want to spend a lot of time figuring that out. You don't want to make inquiries or go door-to-door or wake your pastor up for a Skype conference. Best bet: unload the stuff at a homeless shelter or mission or something, but only do that if the meal was something you simply didn't care for. If it made you sick, put it out of everybody's misery.

VII. No Solo Portions. Unless You Have Some Clever Way to Make it Work Up Your Sleeve

Think it through, you know? Let's say that the meal is over, everyone is sitting around rubbing their bellies and lighting pipes, and every last bit of dinner is gone except for, say, a quarter of a T-bone steak. There are no more onions, no more asparagus, no more gravy—just steak. In a case like that, somebody needs to take one for the team and force the thing down, or toss it to the dog; making that quarter of a steak a leftover doesn't make much sense. There are levels to this particular commandment, though, gray areas. Let’s talk spaghetti. That one could go either way. If you make too much sauce, you're in a jam. Leftover sauce means you've gotta boil more noodles to enjoy it, a circumstance you want to avoid, because part of the whole attraction of leftovers is that you nuke 'em and you're set. But in the event that you've got leftover noodles, just throw some mozzarella cheese and butter in there and heat that sucker up, done.

If it's in the fridge, it's fair game, so if you want it, grab it. That's the law of the jungle, basically. Forget it at your own peril.