Nowhere is the cynicism of modern female-directed advertising better seen than in the peddling of "natural" makeup. 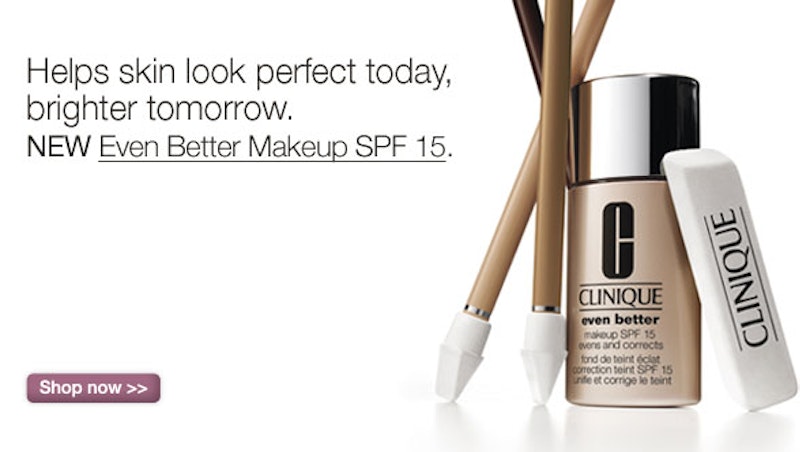 There’s almost no upside to having wisdom teeth removed. Sure, you get to eat ice cream for breakfast, and don’t have to feel guilty about lying on the couch for days on end, working your way through an entire season of So You Think You Can Dance on Tivo. I spent last week doing just that. But I also ate a lifetime’s worth of soup, and killed a lot of time in waiting rooms—at the radiologist’s, the dentist’s and the hospital—surrounded by battered, outdated women’s magazines.

Studies on body image and self-esteem have shown that after only three minutes of flipping through a fashion magazine, 75 percent of teenage girls feel “depressed, guilty and shameful.” As a post-teenage woman, when I spend three minutes flipping through a fashion magazine—the only reading material on offer in many waiting rooms—I’m tired, the result of three straight minutes of eye rolling.

One of the most roll-inducing things I stumbled upon was an ad for Clinique’s Even Better Makeup. The copy reads, “Makeup that virtually erases the need for makeup,” and next to it are, predictably, a bunch of erasers. You know, for erasing stuff. That said, I wasn’t rolling my eyes at the unimaginative picture choice so much as at the totally ludicrous copy. Because Clinique is a makeup company. It makes money by convincing you that you need makeup. Makeup that erases the need for makeup would be like a burger that forever sated your hunger for burgers. It would be the supply that erased demand. It would be great for consumers, and very bad for Clinique’s shareholders.

That said, Clinique’s approach to this particular product is a telling one. They’re trying to convince us that we need to buy this makeup so that we’ll never need makeup again. Which sounds great, right? Imagine how much money you’d save, and how much longer you could sleep in every morning, if you never wore makeup. But more importantly, if this product really could erase your need for makeup, it would transform you into what the makeup industry tells us is a very rare breed: the naturally beautiful woman.

Cosmetic companies like to pretend there are only a few women out there who are so naturally gorgeous that they don’t “need” makeup to look “beautiful.” (I’m putting those words in quotation marks because in places like Revlonland and Covergirlville, almost every woman “needs” makeup, and “beautiful” is what she becomes when, and only when, she applies it.) Despite the fact that any time these women are photographed, they’re made up, styled, professionally lit and Photoshopped—as Cindy Crawford once said, “Even I don’t wake up looking like Cindy Crawford”—we are supposed to believe that they look this way naturally and without any effort. These women are the lucky few, we’re told. For the rest of us, makeup is our only hope.

As consumers and mere mortals, we know we’ll never be naturally gorgeous like these women. But we want to get as close as we can. We want to look as beautiful as we can, and we want to make it appear that we didn’t even have to try. And that means “the natural look.”

Perhaps one of the most perverse things women do is to spend hundreds of dollars on cosmetics and an hour in front of the mirror every morning, all to achieve the appearance of having expended no effort whatsoever. There is nothing natural about $48 “barely there” foundation or $36 “nude” lipstick. There is nothing natural about painstakingly styling your hair, using a blow drier and a special mousse, to achieve a tousled “bed head” look.

Our attempts to look perfect without appearing to have tried are yet more evidence of the effortless perfection phenomenon discovered by researchers at Duke University in 2003. According to the Duke study, young women feel immense pressure to be academically smart, accomplished, fit and popular, all without visible effort. In the same way, they feel the need to be, or at least appear to be, “naturally” beautiful, even if it costs them a lot of money and an extra hour of sleep every day. And because their makeup, like their efforts, must be undetectable, they’ll invest in mascara that perfectly matches their natural eyelash color, and rebuff compliments on their appearance with a casual, “I just rolled out of bed 10 minutes ago.”

The natural look is anything but, just like a makeup that claims to erase the need for makeup is anything but. And as for natural beauty, well, not to get all kumbaya here, but surely we know by now that natural beauty has very little to do foundation or lipstick or mousse. Real natural beauty is about wit and intelligence and kindness, and it can’t be painted on or Photoshopped in. But you’re a smart, eye-rolling consumer, and you already know that.