In Defense of Ugly Fruit 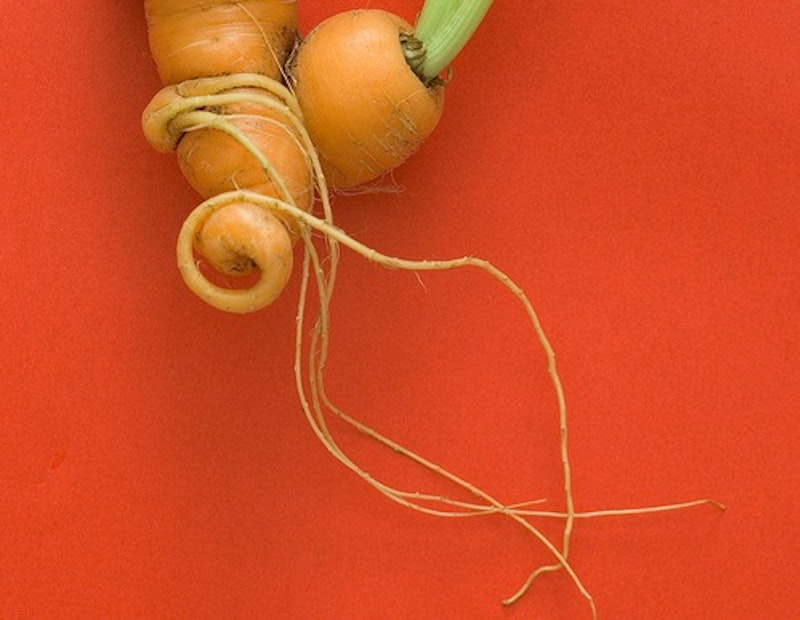 I vaguely recall one month in elementary school when every joke blurted out in class revolved around antiquated horse laws. We would sit together in a circle, reading a text on American settlers in New England. When the teacher asked someone to read aloud, we'd follow straight-faced for a full sentence before shouting out, “It is illegal for a horse to sleep in a bakery!” Our inner circle of friends anticipated every bizarre non-sequitor and would erupt in laughter before the “joke” was even finished. We were an odd bunch that found quasi-violent imagery and Capitol Steps routines equally tickling. God knows if our teacher found this comedy shtick to be endearing or extremely troubling. This blip of a memory was destined to float away forever but somehow watching CNN last week prevented that from happening.

There was one classic horse law that always got a good laugh. The law made it illegal to ride an “ugly” horse in some Illinois town. Apparently laws against ugliness aren't quite as outdated as one would think. Last week, CNN dedicated its feel-good-news-story-of-the-day segment to the European Commission's decision to overturn its 20-year-old ban on “ugly” fruit. For two decades, the Commission has regulated the shape, size, and look of fruits and vegetables sold across the continent so that they match a prescribed aesthetic. This means assessing the proper crookedness to a carrot and curvature to a banana and then actually writing it as law. It's not every day that Americans are treated to the absurd reach and pettiness of EU regulation, so let's see if we can't shed a little more light on the subject.

While most discussions of food regulation in Europe deal with genetically modified fruits and veggies, this one is more vain. The Times Online captures the hilarious wordage associated with the old rules, “Class 1 cucumbers must be ‘practically straight’ and their maximum bend must be at a gradient of no more than 1/10.” And even better, “Carrots must not be forked (with more than one root). They must be smooth and regular. If they are less than 20mm (0.79ins), they must be called ‘early’ carrots.” Now, cucumbers and carrots can be as misshapen as they like without fear of discrimination. However, not every fruit and vegetable is treated equally under the new regulations. There will still be a grade scale for apples, grapes, strawberries, pears, and tomatoes, which just so happen to make up 75 percent of produce sales. And best of all, “The bend of a banana must [still] be ‘the thickness of a transverse section of the fruit between the lateral faces and the middle, perpendicular to the longitudinal axis, must be at a minimum of 27mm (1.06ins).”

Probably even more humorous than the actual existence of these absurd rules on cucumber length and banana thickness is the conversation following this recent course of action to clean up bureaucratic mess and outdated laws. EU officials describe the decision to lift the “ugly” fruit ban as a victory for consumer choice. In addition, blemished fruits and veggies will, I guess, be a cheaper option to help those tied down by the economy. While the majority of Europeans see this reversal as a long-awaited outcome for what was clearly unnecessary governmental reach, the politicians somehow find a way to pat themselves on the back for helping the economy and the little guy at the same time.

So does the end to the “ugly” fruit ban mark the beginning of a new European Commission free of pointless, nit-picky legislation that wastes everyone's time and leaves its constituents slack-jawed and confused? No. Despite the EU's valiant efforts to frame most issues in the context of continent-wide equality (ensuring manufacturers sell the same product in Belgium and Greece, etc), there are certain measures that are just too absurd to take seriously. Thanks to a little browsing at Absurd E.U. I learned that there are directives on the maximum noise levels for lawnmowers and the correct shade of green for the pedestrian crossing light. And while these are misinterpreted more than anything else, it is hilarious to see the EU and UK duke it out over the definition of an island and the threat to rename yogurt as “heat fermented milk pudding.” If only there was an incident that could somehow combine EU compliance with the horse-law antics of my youth; check.