The Joneses Are Broke

You'll have to try to keep up with someone else. 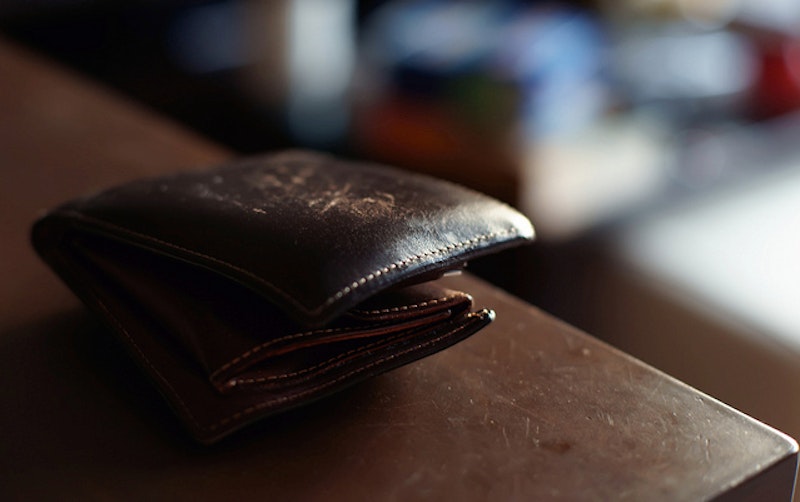 My wallet is an old, beat-up, white leather possession that’s still somehow intact. If you own any white leather items, you know they’re hard to keep clean despite all efforts to rub, wash and polish. I secretly hope the zipper will break or the snap will pop off, but I suppose there is something to be said for durable goods. When I take my wallet out in public, I’m a little embarrassed. I see other women with their colorful, clean Vera Bradleys or shiny leather cases and I feel shabby.

I’ve been trying to simplify my life. One of the hardest things is holding out to replace something when it just isn’t necessary. Putting the harness on consumer spending isn’t easy even with the best of intentions. Common consumerism has brought the possessions once allocated to the rich and famous to suburbia, which makes it even more of a distraction. I don’t think of myself as a minimalist, but I’m trying to make due with less, which isn’t difficult when you write for a living.

I worked out today and noticed my Saucony sneakers were ripping a little by the shoestring. Like my wallet, they’ve been scrubbed and washed, and aside from a graying appearance, the rubber sole is in perfect condition. I should be happy, but I’d much rather go to the outlets today and buy a pair of those new Nike shoes that come in all the cool florescent spring colors. And if I feel good, I’ll run faster, won’t I?

Then there is my Verizon LG cell phone. Yes, it’s a dinosaur. And yes, I want to win the smartphone lottery. It’s time for my upgrade but except for the superb camera feature, do I need an iPhone? Apparently the answer is yes. Three of the largest surges in non-necessity sales in the last two years have been in iPhones, iPods and flat screen TVs, in that order. “Less is more” obviously does not apply to the TVs in particular.

To say my husband is a prudent spender is an understatement. Despite this, he came home last weekend and unloaded from his car trunk two gigantic chaise lounge chairs that hang from equally gigantic iron frames. Unless you are at a Disney resort poolside, I’ve no idea who would have the room to set these crazy things up. He and his co-workers convinced each other at a boat show that they could not relax in the sun this summer without each purchasing these monstrosities. These people are top in their field and yet somehow they drank the “I need” Kool-Aid to the tune of $600 a pop. And I’m on the fence about a new wallet?

Americans can’t keep their hands out of the piggy bank. Some studies show Europeans are significantly happier than Americans, yet live in smaller homes, drive smaller cars and produce much less waste. In addition, there is the emerging middle class in China and India working hard to join the club, hankering after the American lifestyle. Despite the recession, money spent on alcohol and tobacco remains the same. Apparently, bad habits are not directly related to bad times. Makes perfect sense, I’ll drink to that.

I’m keeping the Frugal is Such An Ugly Word magnet on my refrigerator, but am trying hard to downshift. Downshifting means working toward simple living by making more choices toward a more sustainable lifestyle. I can live with less and I can live longer with the possessions I own. It’s a different mindset… not just a change to a more frugal way of living. The old adages don’t apply anymore, so stop trying to “Keep up with the Joneses.” They’re broke.