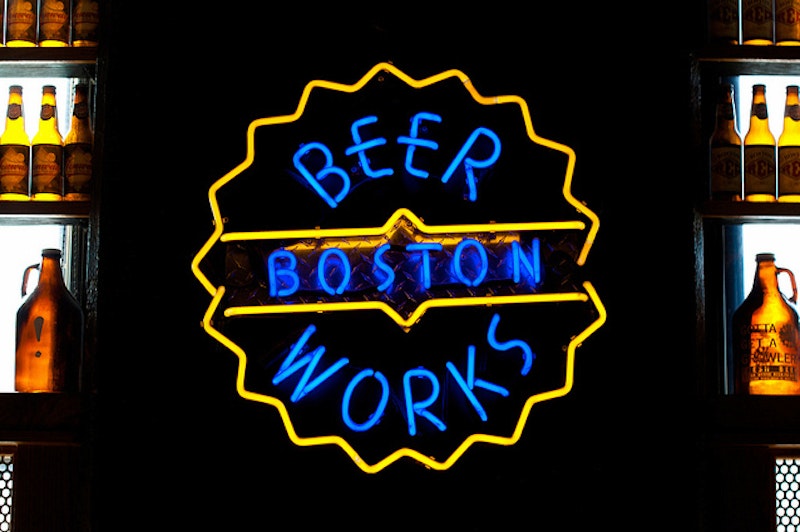 Maybe it's because I was born and raised in Boston, or that I'm Irish-American. Maybe it's because this kind of thing matters to people like me who are from where I'm from. But I love Marathon Monday. Always have and always will.

We learn to love it early there, gifted with the day off school to watch late-morning baseball and clap and cheer like idiots beside our inebriated parents and their friends. We get up and go out in the cold, screaming for those we've never met, men and women from around the world who come to exhibit the power of their will, while crowds of effusive onlookers, spectators of all ages, proceed to get shitfaced and clap and shout in support of friends, relatives, colleagues—and 10,000 total strangers. Marathon Monday is a holiday for Boston in general, and her social binge-drinkers in particular: highly motivated, tightly-wound people who like nothing so much as an excuse—any excuse, really—to get sloshed while it's still light out. In this “work-hard-play-harder” culture that looks for any good excuse, Marathon Monday is king, the crown jewel of afternoon inebriation. I honestly don't mean to diminish yesterday’s tragedy, but if you don't know Boston well, if you haven't lived there, you might be excused for not understanding why this attack has been so enormously effective at terrorizing the denizens of the "City Upon a Hill."

And while for many of the onlookers drinking is the main event, the marathon isn't really about the enjoyment of those who bear witness. It's about the runners, and Boston's unequivocal embrace of their determination. Boston is not a place known for its warmth, either in mercury or in men. We call ourselves "Massholes" like it's something to be proud of. And yet our capacity for generous, indiscriminate enthusiasm is boundless on this one day. When you're there, standing beside the marathon route, you get swept up in it, cheering madly for total strangers who are crazy and determined enough to want to run 26 miles on this early April morning.

Not all of Boston's holidays are held in such high esteem.

I've known salt-of-the-earth Irish-Americans who refuse to celebrate St. Paddy's Day because it stereotypes the Irish. Plenty of commuters who travel through Kenmore Square for work—loyal Red Sox fans included—bemoan the home opener (another great day drinking holiday) for ushering in the long season of awful Green Line commutes. Gay Pride has an enormous, but limited, following.

The marathon is different; while any organized event with its scale is sure to earn its share of detractors, Marathon Monday is an incredibly positive, communal experience that transforms the city, if only for a day. Also known as Patriot's Day—because it celebrates the battles of Lexington and Concord—its arrival ushers in a short but ecstatic springtime in Boston.

Prior to yesterday afternoon, the marathon was a local holiday immune to politics, partisanship or divisiveness; to place bombs at the finish line is an unthinkable intrusion. The marathon is an emblem of the values Bostonians hold dear: to win, one needs no expensive tools, equipment or training. It's truly democratic. It's also an emblem of diversity: people from every continent on Earth come to participate in a race that requires no common language or cultural assimilation.

Next year on Patriot's Day, federal, state and local officials will undoubtedly employ unprecedented security procedures coupled with state-of-the-art surveillance technology to monitor and protect the marathon from another attack. What is already one of the most claustrophobic days in the city will only be more congested, with added security procedures making any attempt to navigate from one place to the next near impossible. And yet, like many other Bostonians who no longer live nearby, I can't wait for April 21, 2014, when I can make the pilgrimage to Boston to celebrate my city's greatest holiday. And because I don't want to "let the terrorists win," I plan to be drinking—heavily—before most Americans have even made it into work.