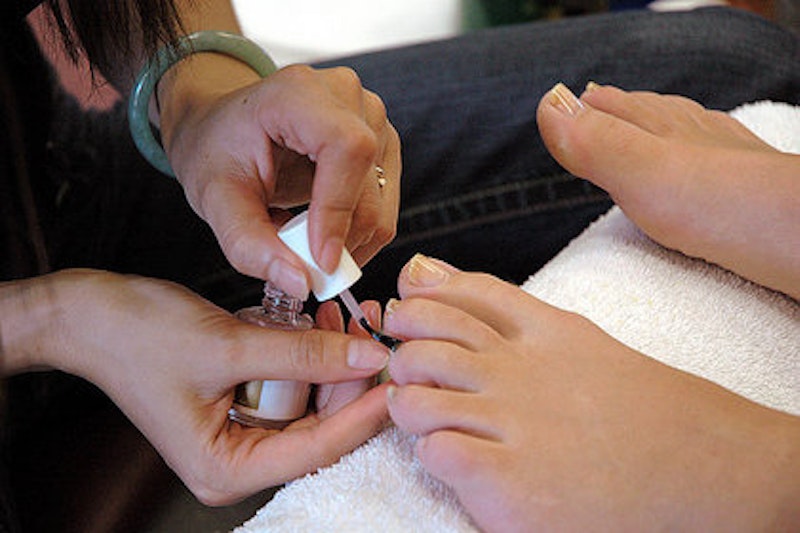 When I have a lot going on in life, my one indulgence is a pedicure. There is nothing better than sitting in a vibrating massage chair while someone rubs and pampers your feet. I close my eyes and relax in silence. I know better than to attempt conversation, so now I just nod, pick out my color and sit down. I stay mute for good reason.

The lovely owner of Fantasy Fingers is Vietnamese, as are all the other women who work there. She speaks fluent English but the other beauticians speak in varying degrees of broken English and in even less varying degrees, of understanding it.

Last year before my initial appointment with a divorce attorney, I decided to “zone out” in the magical vibrating chair. I guess as a gesture of friendliness, the sweet older woman who was doing my pedicure asked me if I was getting “All pretty for husband?" "No", I replied, “Husband and I are getting a divorce.”

Silence. I felt guilty I had made her feel guilty, so as a courteous gesture, I asked her what she was doing over the weekend. I gathered that she was visiting a friend from Vietnam who also worked at a nail salon in Dover, Delaware. Actually, her pronunciation of the town sounded more like “Dober, Delawaa.”

It just so happened that my son was dating a very pretty Vietnamese girl in her last year of college, whose aunt owned a salon in Dover. I mentioned this in passing and wondered if perhaps it was the same nail salon. I think this was too much information for her to comprehend and she did not respond. I closed my eyes and drifted back into my comfortable silence.

A minute later I heard her relaying something in clipped and rapid Vietnamese to the young girl working beside her. At the very end of the story, I heard the words "Dober Delawaa." My eyes popped open just in time to see the other pedicurist looking at me empathetically. What did they say? I couldn’t imagine.

In the click of a second, the young pedicurist whipped around and rehashed the story to a manicurist clear across the room. By then they had my full attention and the only words I understood were the last two: "Dober, Delawaa.” The woman at my feet looked me in the eye and said with full assurance, "She only want husband money. Young girl in nail salon look for money. He too old for her."

Suddenly, it all became very clear. Between the divorce statement, the story of my son's girlfriend and the Dover, Delaware manicurist, this all became a classic case of “lost in translation.” The entire Vietnamese salon population was now under the impression that my husband, who was divorcing me, was doing so because of an affair he was having with a young manicurist from Dover, Delaware. I could never unwind this one! I also could not make up this story in a million years. So I just laughed. And their sympathetic looks turned to smiles and they laughed along with me.