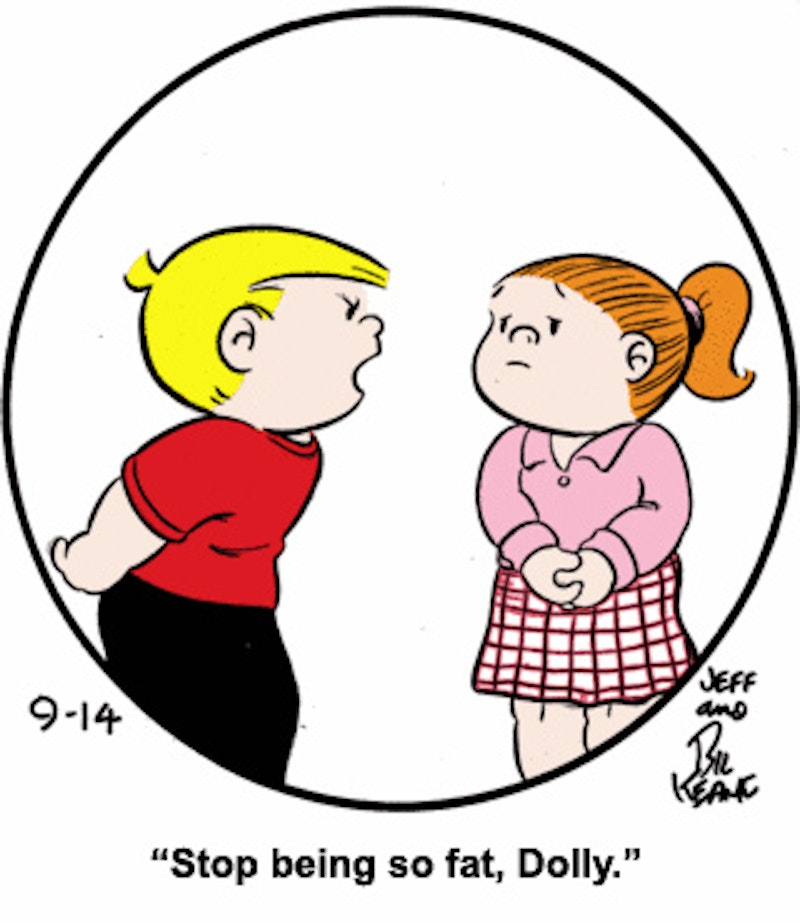 Ah, the elusive muse of self acceptance. Those graced with its inner calm don’t even know they have the gift, while the rest of us languish in a sea of self doubt.

I repeat this to myself over and over, but I still hate shopping. Why?

Because stores seem to have tons of size 2s and 4s and they’re always out of my size. Why? Because retailers don’t seem to have gotten the memo that there are more size 14s than 2s in our actual world—and the retail buyers stock stores with lots of 2s and 4s since that’s what they see on TV. Hello! Retail buyers? Take a trip to your local mall and go through 10 stores to see what sizes they’re out of—I think your skinny asses will be quite surprised.

This week in the New York Times Magazine there’s a great article called "Plus Size Wars" by Ginia Bellafante. It includes the history of plus-size fashion icon company Lane Bryant as well as incongruous information including the fact that 64% of American women are ‘overweight’ yet only 18% of revenue in women’s clothing comes from plus sizes.

I sort of hover, size wise. I’ve never been into a Lane Bryant, though everything in the window looks adorable. Why have I never been inside? The following quote from the article told me why:

“With bridge,” said Lane Bryant’s Chief Executive, connoting sizes 14 to 18, “you have that notion of, ‘It’s temporal for me; I’m going back to a 10 or 12.’ This is a woman who might have been a size 8 or 10 earlier in her life, and she doesn’t easily adjust to the idea that she has gotten bigger."

That is exactly how I feel. (And I didn’t even know I was a bridge—over the troubled water of failed dieting, I’m afraid.)

I believe this bridge phenomenon was summarized well by the fictional character John Bender in the 1985 classic John Hughes film The Breakfast Club when he says, “there are two kinds of fat people: there's fat people that were born to be fat, and there's fat people that were once thin but became fat [...] so when you look at 'em you can sorta see that thin person inside. You see, you're gonna get married, you're gonna squeeze out a few puppies and then, uh, [imitates chick blowing up/getting fatter].”

Now I was never really thin. Thank God I was a teen in the 80s when we were allowed to eat Quarter Pounders in front of people without being socially suicidal. But my wedding dress was a size 8—a size I honestly haven’t seen since that day. I think I was back in a 12 by the end of my honeymoon. After having four kids, I actually consider myself lucky to be in a 14. I wish I had an easier time embracing it, though—or "adjusting easily" as the plus-size dude says.

The NYT article describes the "issue" with clothing stores carrying plus sizes. It’s nothing personal, it turns out it's just something fashionally challenging. Apparently since larger-sized people come in many shapes, making clothes for them is more difficult. You know, the whole pear shape versus apple shape versus whatever the hell the other fruits are. Maybe they should do a Plus-Size Garanimals deal where you can buy the clothes with the little pear logo tag if you’re a pear shape?

Well, until the stores can figure something out for us bigger girls (hint: more Spandex, people), I’ll keep on hoping for that perfect pair of jeans that’s comfortable yet somehow flattering. Because the Lane Bryant guy is right: I’m probably never going back to that size 10 or even 12. I need to learn to just accept myself the way I am, and get comfortable in my own skin. We all do.

And you know what else? I am also not going to stop always ordering dessert at the restaurant because life’s too short not to have dessert.

So that’s a plus.