After the perfect tailored suit. 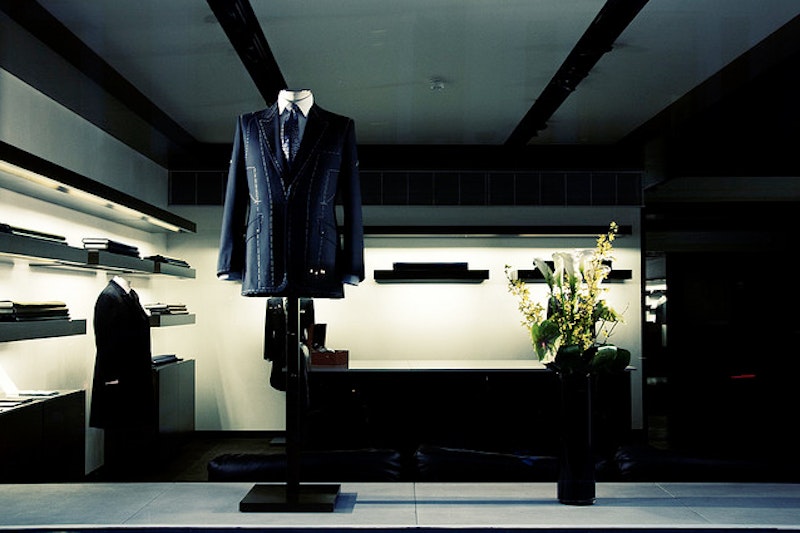 As a lapsed clothes horse, I read with keen interest a front-page Wall Street Journal story earlier this week about a third-generation tailor on London’s Savile Row who recently went “rogue.” Matthew Farnes, 35, quit his job at the 306-year-old establishment Ede & Ravenscroft to set up his own shop outside London. Further scandalizing his upright and uptight former colleagues, Farnes makes house calls, gives tips on what jackets to wear with jeans and, worst of all, courts attention and business through his blog Savile Row Artisan. No skin off my nose, all this bother, although I never thought that jeans and a sports coat was a particularly smart look.

What first made my eyes pop in the article was that Farnes undercuts his competitors by charging $3180 for a bespoke suit, and that price is merely the starting point. Back in 1987, I’d come into some dough after selling a weekly newspaper and, once the wires were sent from the buyer’s bank to my own, I set off on a long trip abroad. It was just 23 years ago, but obviously an entirely different world: for example, this was a period when flying was still fun and you could arrive at an airport’s gate five minutes before departure and not even break a sweat. As it happened, I had a crackerjack travel agent (remember them?) who somehow cobbled together a marvelous deal; an open-ended, first class round-trip fare in which I could fly anywhere for a shade under $4000. That was a lot of money in 80s dollars, but considering that my destinations included London, Berlin, Athens, Rome, Paris, Ankara, Singapore, Hong Kong, Bangkok and Manila, it was a bargain.

When I boarded the British Airways jet en route to London, I didn’t know which way to turn for my fancy-dan seat; dressed in sneakers, a railroad cap, Goodwill Eisenhower jacket and ratty chinos, I went to the john at the back of the plane at one point and upon returning to my section was scolded by the stewardess, who curtly explained that I was entering forbidden territory. I showed her my ticket and she offered profuse apologies, which I happily waved off and settled back down with a glass of champagne and a copy of the Telegraph.

Before leaving the United States I’d told a British friend, who worked at the then-chockablock Henry Ansbacher firm, which was netting barrels of greenbacks buying and selling media properties (including my City Paper), that my first order of business in London was to purchase a bespoke suit. “Well,” Hilton laughed, “you can’t just walk into a Savile Row shop without a recommendation.” After a few more jokes at my Yank expense he wrote a letter of introduction to his haberdasher of choice, Anderson & Sheppard, which was accepted, although the tailor’s scowl at my black high-top Converses is one I won’t ever forget.

The fellow was very stuffy and formal and explained that four fittings was the norm, and I shouldn’t expect the three-piece brown suit (with a splendid watch pocket) to be completed any time soon. When I said that was jolly, old chap, since I’d be traveling around the world, and making pit stops now and again in London, he harrumphed an assent. Arching an eyebrow, as if to make sure I was legit, he warned that the suit fetched $600 (and this was at a time when the pound was creaming the dollar) and then got all tetchy when I whipped out an Amex card and offered to pay right on the spot. “That’s not how we operate, Mr. Smith,” he explained, and I went on my way.

I bust a gut upon reading the following quote in the Journal article from author James Sherwood, a fellow in the opposite camp from Matthew Farnes, who said, “There’s a certain level of intimacy, inevitably. I mean, a tailor is the one person other than the man’s wife or mistress who will regularly see him in his boxers.” Rah-ther! Good thing I’d long abandoned a collegiate fashion that didn’t always include drawers of any kind.

Anyway, the tailor and I, by the third visit, came to terms and he even cracked a smile now and again. He grimaced when I asked if he’d show me how to properly fasten cuff links to snazzy French cuff dress shirts, but at the same time offered advice on where to find the best custom-made boots, shaving gear and leather jackets in London. A few months after that first awkward visit, I arrived jet-lagged from Asia, a bit worse for wear, and stepped into Anderson & Sheppard one December morning. Immediately, the tailor recognized me by name, offered his hand, and said, “The job is complete.”