Scavenging in the Straat

Amsterdam has recreational opportunities we’re all aware of, but why is it so damn hard to get a good sandwich there? 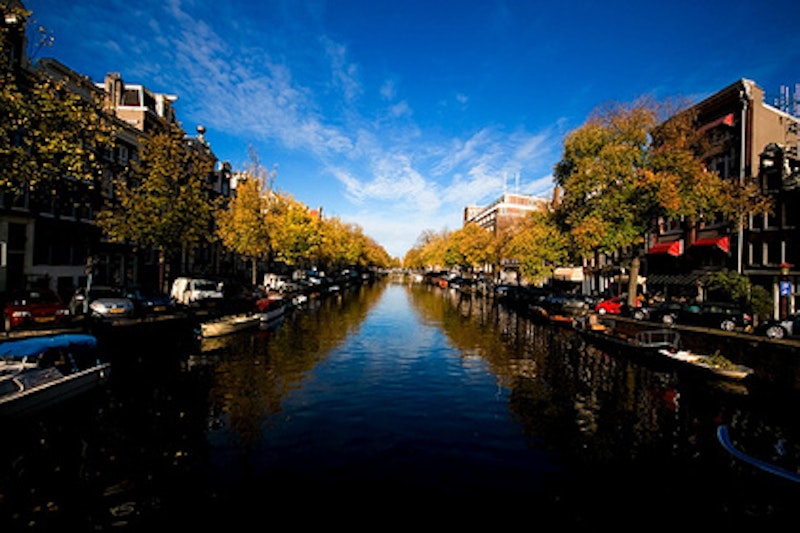 I recently spent some time in Amsterdam, or, as it’s better known, the City of a Thousand Splendid Whores. Actually, there’s a lot more to do in Amsterdam than the stereotypical activities everyone instantly thinks of, and it gets tiresome hearing the same reaction whenever you say “I’m going to Amsterdam this summer”: “Amsterdam, huh? I know what you’re going over there for! HIGH FIVE!” But enough about conversations with my mother; I’d like to waste your time talking about the food situation that I discovered in the Netherlands.

Let me begin by saying that the Dutch are not known for their food. They can make a mean wooden shoe, but they can’t make a fucking taco or a decent pasta sauce. On two occasions, I actually had a pretty good cheeseburger, so I’m not going to criticize them for that. However, the two places of which I speak were somewhat expensive restaurants so there was less of a risk. If you’re in Amsterdam, and you’re just stopping for a quick burger, you have to pay attention to the menu: in most places you will have to say that you want a “grilled burger” because a “hamburger” is like SPAM or something bizarre.

Most of what you’ll find to eat in Amsterdam is sandwiches, or “brootjes.” You would think that this means the Dutch have gotten really good at making sandwiches, but you would be mistaken. My first meal in Amsterdam was something called a “Brootje Italiano” at a small deli near where I was staying. Now, I don’t know which culture is wrong about Italian sandwiches, Americans or the Dutch, but the thing that I ate was not what I understand to be an Italian sandwich. The Netherlands is, after all, geographically closer to Italy, but I’ll take an American Italian sandwich any day of the week. The brootje consisted of stringy prosciutto with thinly spread pesto sauce, sun-dried tomatoes (the tough kind that you can’t chew easily), lettuce that resembled the weeds that grow out of the cracks of your driveway, and sunflower seeds—an item that clearly has no business in the sandwich world. This concoction sat haphazardly on a very hard roll. No cheese. In fact, cheese rarely comes standard in the Netherlands; you have to seek it out. And my favorite type of cheese, cheddar, is harder to find than the Yeti. The rural people of the Netherlands often take blurry photos of cheddar cheese in the woods, but no one believes that it truly exists.

On a separate occasion, I grabbed a brootje at a different deli, one in which you could pick the sandwiches from display. I got a sandwich that appeared to have mushrooms and balsamic vinaigrette. I should have opened the shrink-wrap and checked it out before purchasing because after a couple of bites, I discovered that what I thought were mushrooms were actually cut up black olives. And what I thought was balsamic vinaigrette, was actually this paste made out of ground up black olives. I would add at this point that I don’t like olives, but then again NO ONE DOES. And even if you do like olives, how could you like them enough to have them rudely dominate the ingredients of a sandwich like that?

The Dutch also do a pretty weak job with pizza. There is this one chain called "New York Pizza" where I often ate because 1.) pizza’s sold by the slice; 2.) outlets are peppered throughout the city; and 3.) the places are open really late. Still, it was just mediocre pizza served in the type of place that had display cases where you picked out a slice and they ran it through the Quizno’s-type conveyer belt oven. On my last night there, I did have a pretty good pizza at this place called Johnny’s Pizza outside of the center of the city. It’s on Spaarndammerstraat. Right before it connects to Tasmanstraat. Not far from Haarlemmerplein. You know the place, right?

Now, I know people say that Americans eat overly large portions, but I’d rather do that than starve myself with the typical European portion. If you get a sandwich at a restaurant, it rarely comes with fries or chips or anything. And to those who say that there are less obese Europeans than there are Americans, and I agree, may I remind you of the following: Fuck you, I’m hungry. I’ve managed to live my life with American portions and not be obese thanks to willpower and an ability to exercise.

But there are differences in eating habits that are more bizarre than portion size. For example, they charge you for ketchup packets in fast food places. The first time this happened, I felt like standing on a soapbox on the sidewalk and shouting, “The streets of America are paved with ketchup packets, I tell you!” Hell, the Taco Bell drive-throughs in America practically shoot a t-shirt gun of mild sauce packets at me when I ask for them. In addition to their stingy attitude towards sauce packets, Europeans hardly ever use ice. At restaurants, I’d ask for a Coke, and they’d bring it out in a double shot glass with no ice. That’s two euros, by the way. At McDonald’s, they’d put ice in your drink, but it was usually just three lonely cubes banging around in there. Now, this can be good in the sense that there is more drink to be had. After all, when I go to Wendy’s, they squeeze an eyedropper of sweet tea over a block of ice and call it a “medium.” But the fact is I can get free refills at Wendy’s, bitches.

I don’t want to be totally negative because there were two authentic Dutch food items that I ate and enjoyed. The first one was called “kibbeling,” and it basically was just fish and chips. However, it was less greasy than normal fish and chips, so maybe that’s their unique slant on the dish. The second Dutch item I liked was “poffertjes,” which were these small pancake-like things served with fruit and whipped cream. There were other original Dutch items that I wasn’t brave enough to try. For example, this ex-pat living in Amsterdam tried to convince me to try these herring sandwiches (I don’t remember what the name of the dish was). If you want to know what they look like, just picture a fish in a bun. I mean, the head and tail were gone, but it looked like the type of thing a grizzly bear would make if a grizzly bear had a concept of making sandwiches. I asked the guy what they do, if anything, to prepare the herring—is it raw? Pickled? He told me that he would have to tell me the process after I had already eaten it. Not the best way to sell something. But if anyone reading this knows the process, I’d love to hear it. It’s tormenting me, like the “three sea shells” riddle in the movie Demolition Man.

Anyways, that’s the basic extent of my exposure to the food of Amsterdam. I couldn’t help but walk away thinking, “Come on, Dutch: this is the land of perpetual munchie-craving, and your food scene is this weak?”