New York Fashion week is upon us, a time of sweet revenge for people who've been called “weird” all their lives. 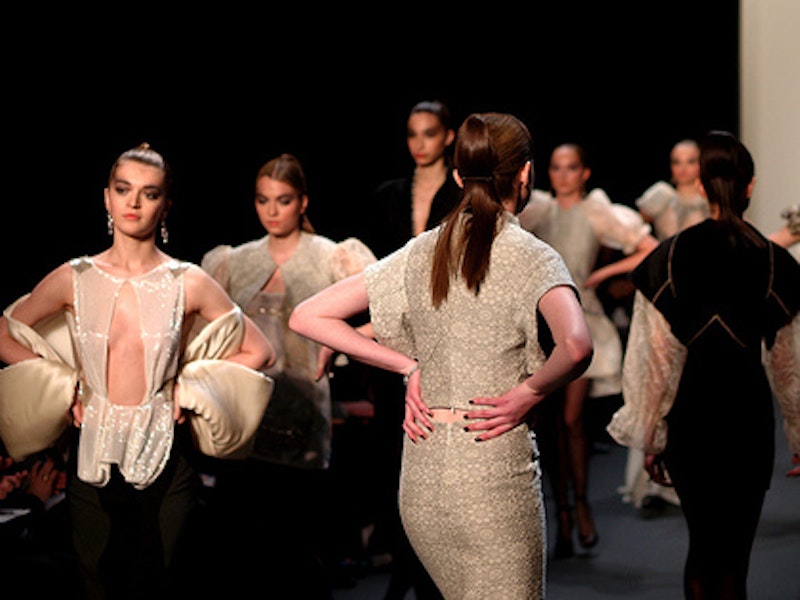 I’m walking down 42nd St. from Grand Central towards Bryant Park, the force field of New York Fashion Week. The tents are up and everybody is in sunglasses, yours truly included. Cameras are flashing. Models are out on the prowl, and people start to group themselves around the park as if to soak up any and all glamour. But since I am glamour and don’t want to look like a pathetic poser, I opt to calculatedly strut through the park, which will insure that I am seen by all. I’m in black acid wash jeans, a loose black and white V-neck that says “ART” and black ankle boots with a two-inch Cuban heel.

My runway strut is interrupted by a photographer who stops me and decides that he wants me to be the next “It” boy. He takes me to the Marc Jacobs show and I get to sit in the front row next to Victoria Beckham. Bananas! Then from nowhere comes dramatic music and this spotlight out of which Heidi Klum emanates and goes, “Madison? You’re ‘In.’ You can leave the runway.” The audience cheers and I get up and work my way backstage to the land of glamour. PAF! Then I wake up.

For one reason or another, I’ve been obsessed with glamour my entire life. Award shows. Red carpets. Fashion shows. Women—and men—in great clothes. Million-dollar homes. There’s something about artifice that really speaks to me I guess. It’s like if you don’t like yourself, all you have to do is create this really fierce avatar and just aspire to be that person instead.

One of the things I’ve come to learn is that it’s hard to be confident when, reliably, the Black Masculinity Police pops out to tell you that you don’t live up to their standards. I’ve heard people say that men don’t have image issues. Bullshit. Take it for what it’s worth, but it’s been really tough for me when I’m constantly called “Faggot” several times a month and—get this—nearly always by black people. The sad part is that I’m not even all that fey. I guess that’s why I resent black people till this day. It just gets on my goddamn fucking nerves, you know? It’s like, OK. Don’t you think I know by now that I like mans? I mean really, if you’re going to deliver an insult, at least make it a good one.

Uneasiness about not keeping my “masculinity” in tip-top shape started way back in the day. As a young boy I remember hating Saturday mornings because my stepdad would always wake me up early to do “manly” stuff, like play football with the neighborhood boys. He wanted to make sure I grew up to “Be a Man.”

“I can’t be raisin’ no punk.” Apparently, that was his only goal in life. But you better know I was not about to be playin’ in no damn dirt. “Fine, daddy. I’ll play football with them if you promise they’ll fuck me afterwards,” I secretly thought.

The moral of the story is that I was never masculine enough for daddy; black people hate me because I don’t act the way black men are supposed to act; and for some reason, people mistakenly believe that when I wear a pair of Cuban heels I am somehow also ruining God’s Great Plan. Just the other day this woman stopped me on the street to tell me about her church ministry and I was like, “No thanks. I’m about to go have gay sex.”

“God bless you,” she shouted after me.

Over the years I’ve come to use glamour and fashion as my avatars, probably similar to others like me who’ve worked hard to overcome getting picked on for whatever reason. The dream for celebrity, glamour and all that is not much more than an escape. Totally. It’s like, “Pick on me now at your own peril, bitches. But you be sorry when I sell 100 billion albums.” I guess I turned all the hatred directed towards me into unbridled aspiration. Just think of all the gay boys in Chelsea, the Castro, Dupont Circle, Boyztown or in a dance club near you who seriously believe they’re the next American Idol, America’s Next Top Model or America’s Greatest Hairstylist.

If you’d asked me what I wanted to be eight years ago, I’d have been like “I wanna be an entatain-naaah!; or really, any kind of celebrity status will do.” Isn’t it paradoxical that someone who gets picked on or called names everyday would actually aspire to be even more visible? Spectacle trumps all. To date, the closest I’ve ever come to total ubiquity was when I was on The Sartorialist (OMG!) on April 1, 2008: “Student Style: Yale” if you’re curious. In the comments on that picture, not a single person picked on me or called me a fag or whatever because I was nothing more to them than a picture. I was guarded by the safety of an image.

Even though I have a lot to be confident about now, I still can’t help but wonder what my life would be like if I were a glamicon. You know, it’s that old issue of becoming an image that the artists Andy Warhol and Nam June Paik understood all too well. They both knew that there are two approaches to modern life. One approach is for those who passively allow various media to order their lives; and the other is the desire to actually become an image. All you have to do is create an image to get people to notice you, and they’ll look past all your imperfections. Glamour trumps all.