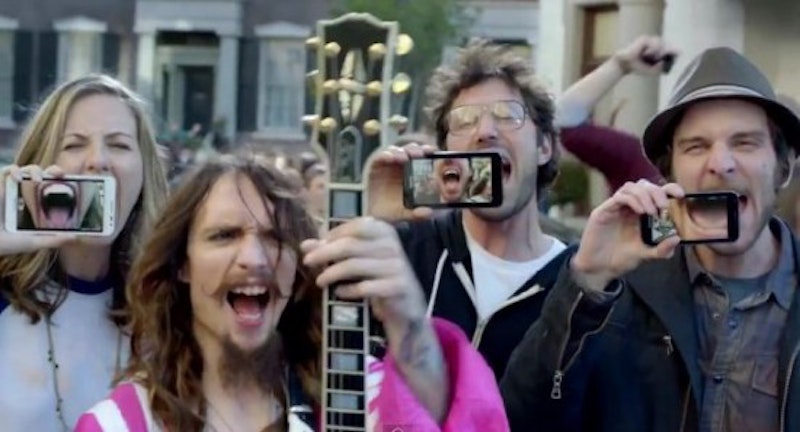 Oh, well played, Samsung; well played. This is how you tease a media campaign, all right: a series of near-wallpaper adverts doled out in dribs and drabs and variations on gray. The insincerely gentle ribbing of all those don’t-stop-get-it-get-it technophiles who pitch tents outside of Apple stores for the right to be among the first to max out credit lines in order to secure, fondle, and hoist aloft various sleek, sweatshop-produced Apple iTchotchkes, all bearded and parka’d and skull-capped. Then it was a simple game of compare and contrast: if the Apple partisans seemed to be camping out for Bonnaroo tickets, the Samsungs loyalist were clued-in hipster adults who tempered an innate smugness with a willingness to let their less plugged-in brethren play with their toys.

(Was there just a whiff of OWS mockery under the surface of these spots? Perhaps so.)

What I loved about these commercials was how witheringly dry they seemed, almost to the point of invisibility, less like actual entreaties for anything than weak absurdist commentaries on the sheer ridiculousness of risking your health for mass-produced bullshit; sort of a loony, Eastern European aesthetic at play, almost theatrical. And I never saw these ads as having much longevity or staying power; eventually, I figured, there’d be fewer and fewer, and I’d forget them and wouldn’t miss them at all.

Which was probably the point, because I didn’t see Samsung’s Super Bowl Sunday exclamation point coming at all. I should have. The Apple hosers in every commercial leading up to this point, you’ll notice, never stopped feigning for Apple swag; it ultimately requires a fucking cell phone stylus—hardly a clincher, in my mind—to trigger the fantastical conceit of free Samsung smart phones falling from the sky, the strum und drang of a Ford-Festiva-level carnival event, and The Darkness’ Justin Hawkins hamming up a cover of his best-known single, and to lure these sheep away from the iBreadline. You have to love the ludicrousness: extras dancing in the streets, dudes bear-hugging Brian Urlacher, a robed gospel choir materializing out of nowhere, some guy being blasted from a cannon, the close proximity of the un-ironic phrases “Wanna see a picture of my cat?” and “I don’t know what I believe in anymore,” Hawkins’ homeless-chic facial coiffure, people singing not directly to one another but, rather, through their smart phones. (A better essayist than I can unpack that notion.) It’s not like I’m going out to buy a Galaxy note tomorrow, but this one quietly topped the actual halftime show by several degrees of magnitude.