Ronald McDonald To Ball Hard Until All Creation Is His Bitch

McDonald’s rules the fast-food scene. So why is the multi-billion dollar behemoth trying so hard? 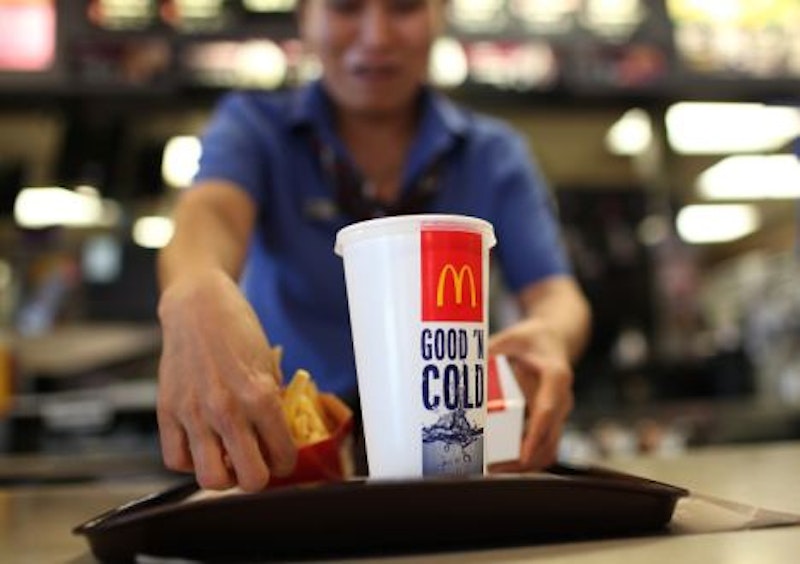 McDonald’s market share has been volatile over the last few years, but the King Kong monster of low-nutrition food still towers imposingly over the cultural landscape, an immovable institution that’s basically the “I Want My MTV” of fast food. From the economically disadvantaged to 1-percental royalty, the mega-chain continues an artery-clogging reign of terror; in its clutches, we’re all victims because even if you’re a health freak, someone you know isn’t and will succumb to the effects of steady diets of fries and Big Macs. We’re all going to die of something, but McDonalds isn’t going anywhere.

Once upon a time, corporate cash-flush advertising agencies had but one core non-Caucasian demographic: black folks. So there’d be all these commercials where people with whom I share a skin tone pretending to have blast using a particular toothpaste or dishwashing detergent or enjoying Kool-Aid, commercials with a distinctly, shamelessly urban flavor. The prior dearth of diversity in advertising never bothered me much, because most of the time I don’t think about life in terms of separations I usually perceive as arbitrary. (Key word: usually.) So this new onslaught of enticements amused a white college friend and me, and whenever one would materialize, we would exchange glances and bellowing “BLACK PEOPLE…” ala DJ Quik hollering “NEW MISSY!” to kick off one of his album cuts.

Subsequent anti-segregation trends in advertising have the effect of highlighting how glaringly retrograde sole-race advertising is. So all those McDonald’s spots where reasonably clean-cut black folks steal away to a McD-enabled “happy place” while ensconced in a recognizably urban/street milieu—driving through a city, plugged into a music device on a park bench, taking a break from DJ sessions or engaging in break-dance face-offs within the confines of chic sub-warehouse spaces—represent a reprehensible sort of camp while furthering a version of what black life is like and how black folks supposedly live it: we’re rhythmic, funky, “authentically ourselves,” yet reasonably sophisticated.

Casual racism or change-the-system-from-the-inside radicalism? It’s impossible to say, but the latest McDonald’s commercial spotlights Asians, but in an unusual way. Ads targeting black folks put a premium on traits, idioms, and behaviors understood on some level as “black,” while ads targeting Hispanics take a similar tack (accented English not verboten, Spanglish okay, et al). But this new McDonald’s commercial essentially throws that logic out the window, sidestepping any acknowledgement of concepts of quiescence and deference endemic to Asian cultures to portray the actors and actresses here as ethnically un-tethered fools whose excitement for mini-McNuggets, fries, and Quarter Pounders is way beyond the, er, pale; Asians, McDonald’s seems to be saying, are crazy cool wackos. On one hand there’s a progressive benefit to this, a sense of leveling the playing field and portraying Americans of all racial groups and classes as equally health-unconscious. Then on the other hand—and this is almost bigger than commercials and advertising budgets and calorie counts and, you know, Coming to America—why the fuck does McDonald’s need to blow it’s not-inconsiderable budgets on television time? Just by existing and selling food—those iconic arches and logos on carry-out sacks convey a message—McDonald’s is pimping itself, and effectively. Why waste time and money playing these demographic shell games when you could build and expand your business in other ways, including paying better salaries?