Biding a fond not-so-fond farewell to Rip'n Chick’n at Popeye's. 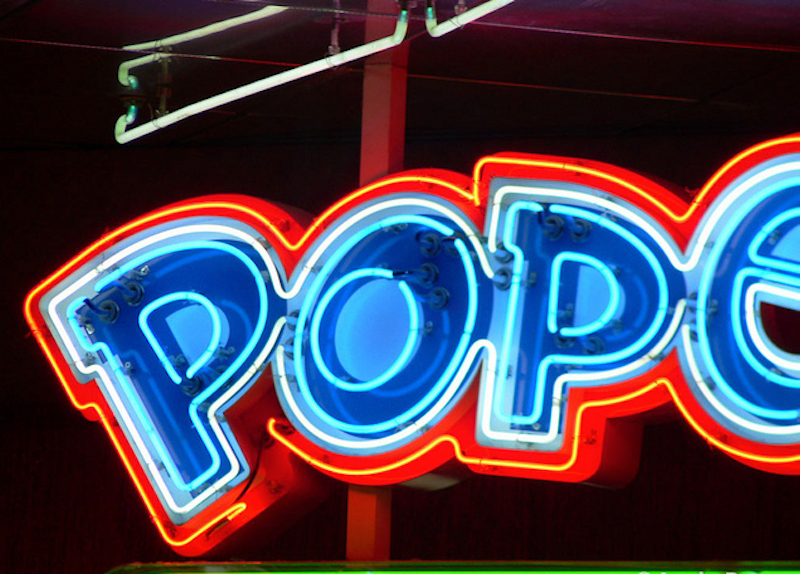 No one really talks about it now, but E.T. The Extraterrestrial kind of ruined sausage links for an entire generation, maybe two. No matter mature you are or how far removed from that movie having an ability to play space rock on your heart strings, it's impossible to sit down to a plate of Jimmy Dean links without entertaining the notion that, on some level, you're eating E.T.'s fingers.

A parallel of sorts can be drawn with the brief and unconvincing reign of Rip'n Chick’n. Earlier this year, New Orleans-centric chicken chain Popeye's introduced a new product, a provocative variation on the traditional chicken tender. For millennia, the average tender has boasted the girth of an especially stout big toe or scrawny wrist; more often than not, servings of three or four—processed or "real," it didn’t much matter—were hearty enough to sate the mightiest of appetites, and mild enough to encourage the use of copious quantities of sauce. Weighing in with Rip'n chicken, Popeye's endeavored to turn this protein paradigm on its head. What if chicken tenders were extremely thin—chicken strips in an extremely literal sense—so that even after scarfing down the accompanying dirty fries, rice, and or biscuit, the consumer was inevitably left wanting more? (Bonus points if the consumer ordered in.) And what if this miserly-qua-economically savvy approach to fast-food poultry was cleverly disguised by a) connecting these strips so that they resemble the battered deep-fried hand of a desiccated corpse and b) coating the thing in volcanic spices?

I ordered Rip’n Chick’n on an, um, handful of occasions; I’m a sucker for spice, sure, but in retrospect it seems likely that these repeat purchases were an effort on my part to convince myself that I was sophisticated enough to get beyond the cannibalistic weirdness of the whole gimmick. Then there’s the whole other dark side to tender/strip attraction, which is one part laziness, one part squeamishness: when one chooses chicken strips over whole pieces of chicken, one embraces a triumph of modernity, but one also sidesteps the messy and essentially human act of dismantling skin, bone, and flesh—avoiding the unavoidably carnal fact that you’re consuming a dead cooked bird. As a continuous choice, this is arguably creepier than shaking hands with Rip’n was.