As obsessed with shopping as we are, it's no wonder our culture suffers from an obesity epidemic. 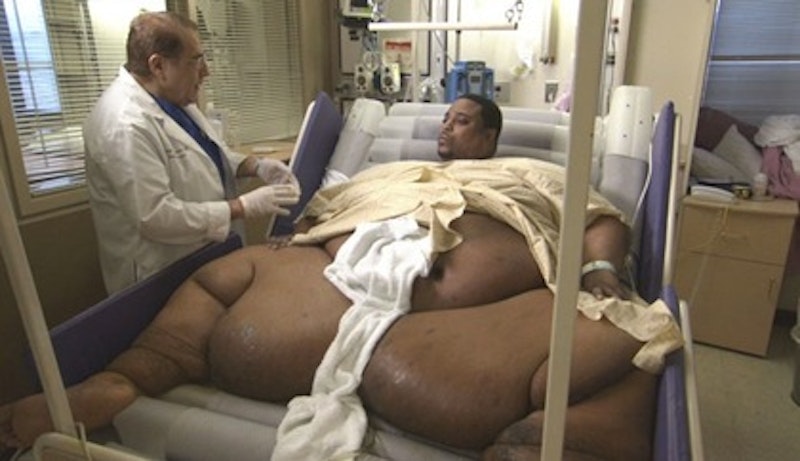 From Half Ton Dad.

As the evening swallowed New Hampshire last week I reclined on a couch and watched about four hours of sublime reality TV, all focused on the grotesquely fat. Outside the cold wind blew and a deep blackness covered the pines, but inside it was warm and cheerful and I had kindled a nice fire in the fireplace and swaddled myself in wool sweaters. Everything was numbing and pleasant.

In December, New Hampshire suffered a colossal power outage. My parents lost electricity for much of the week before Christmas and I enjoyed frequent cell phone updates of their trials (by the time I came to visit for the holidays power had been restored). We spent the holiday and post-holiday portions of my visit emerging into the state’s signature icy cold only to go shopping; we were not alone in this pursuit. Borders and Barnes and Noble teemed, Costco thronged, shoppers crowded even Macy’s (in Bedford, NH, the Macy’s usually languishes in sad emptiness). The news media reported a slack and disappointing retail season, but it didn’t look so bad from the ground. After the dark deprivation of the power outage the citizens of New Hampshire seemed willing to spend, chafing some heat back into their frozen limbs through the magic of discount smoked trout and bulk merino wool socks.

I followed this metaphorical orgy of consumption with a heaping helping of obesity-based reality TV, several interwoven programs on TLC: Half Ton Dad, Half Ton Teen, etc. The fat shows followed the standard basic-cable format for hour-long programs—plenty of commercials, and each short segment began with a time-wasting recap of what was going on in the program. The shows followed various hugely fat people through their invariably unsuccessful efforts to lose weight. Half Ton Teen particularly dramatizes the family suffering. The titular teen, who spent his days in heart-breaking indolence in a tiny room sprawled on a crushed and deformed easy chair, suffered terribly from his grotesque body. He was too fat to go to school, too fat to move around without pain, certainly too fat to date. His mother, who had lost a previous child after only nine months, wanted to give her grossly fat son all the enjoyment that her dead infant had missed. She expressed this mostly through food, gross food, sandwiches drenched in mustard, heaps of French fries, melted cheese. She brought these meals in to her son and he rested them atop his swollen belly and ate them slowly and methodically, his pudgy fingers dragging the fries through ketchup, his labored breathing loud over the TV speakers.

His mother alternated feeding her son with screaming at him for his unhealthy weight and eventually his family brought him to an obesity clinic (an ordeal not without its own humiliations). The clinic’s staff consulted with the family and promised the half-ton teen that if he dedicated himself he would be able to lose enough weight to regain a normal life. His mother, who was distraught and confused and crying, seized upon this good news and told him through her tears, “Do you hear that? You can do anything! You could be President some day!”

This was heartbreaking—her son, though polite and keenly self-aware, was clearly not presidential material. I suppose that the woman was using “You could be President!” in its ancient, American metaphorical sense, in the belief that in our great country, free of the stifling social strata of Europe, anyone can be anything. This family had broken itself on the reefs of consumption, but they still felt hope that they could survive and return to normal, whatever that means in America. Their search for a cure, of course, was another form of consumption, the heavily mediated consumption of medical procedures and services. I have no idea where the money came from for the half-ton teen’s obesity treatment, but the show portrayed his multiple surgeries (to remove fat from his legs and abdomen) and physical therapies. His mother, tragically, intruded into his rehab sessions, interfering with the physical therapist and restricting her son’s already pitiful exercises.

This was a family tragedy; a very intimate drama that consumed one small group of people but also put them in contact with a huge corps of paid professionals. I was thinking of this one family as I read through two extensive websites listing the horrors of dealing with customers. These websites, notalwaysright.com and customerssuck.com, are absorbing and often incredibly funny. Told from the perspectives of retail employees, the two sites collect stories of cruel, stupid, and almost invariably rude customers. There are hundreds of these tales, each one uniting embarrassment, horror, and sometimes the satisfaction of seeing a boor get his or her comeuppance. In these tales, customers routinely make patently unreasonable demands: changing or predicting the weather, providing products that don’t exist (in one memorable exchange a customer asks for waterproof, open-toed, comfortable hiking sandals with a high heel), and frequent requests for telepathic diagnosis of computer or personal problems.

Obviously the stories from these sites are particularly lurid or ludicrous, but they nonetheless reveal the quiet horror of working in retail. I have never worked retail—the closest I came to that was a job at a stable during high school in which I dealt mostly with horses. Horses have their problems but they generally did not expect me to give them free merchandise and they never insulted my intelligence. These websites have given me a great deal of sympathy for the minimum-wage employees who stand between consumers and the gigantic corporations that provide us with most of the stuff we love to buy. The overarching theme of these stories is an odious sense of entitlement. Most of the stories come from America, and a great number of them feature customers shrieking “Don’t you know the customer is always right?” as if it were a sufficient and complete explanation for why an employee of Home Depot should mow the customer’s lawn. Shoppers, by virtue of their supposedly superior position as customers, seem to believe that the employees of the stores owe them something. The relationship hinges on the idea that because the customers might spend money and are assumed to have money that they are a fundamentally different class of person.

By now it is a cliché to diagnose America with a consumer sickness, and surely this sickness does not confine itself to America. Recently we have seen the drama of high gas prices, foundering automobile companies and Byzantine financial schemes and their associated bailouts. For a brief time the thrilling, consumption-based idea of fuel-efficient cars looked like it would dominate the American automotive industry, but we’re already seeing reports that this has exceeded the national attention span and that, with gas prices low again, everyone would like to go back to titanic SUVs. After this holiday season, one that took shape in the public mind more as a retail failure than anything else, I’ve been thinking about the shopping, and the obesity, and the boundless everyday cruelty of customers and salespeople, and the proliferation of reality TV and various other media that promise glimpses into the lives of the super-rich. Consumption! Over the holidays I bought no less than four merino wool sweaters.