The Meatpacking District offers a glimpse in to Manhattan's quick glamification. 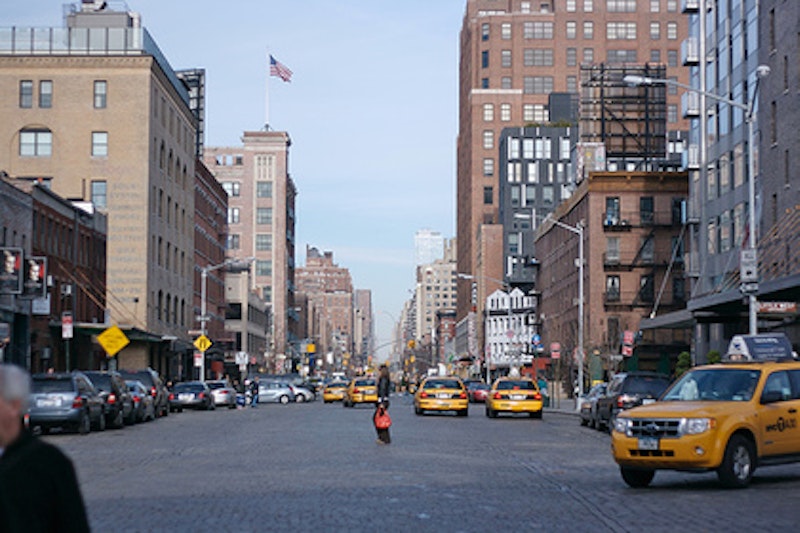 I’m walking west on 14th St. in New York City. I cross 9th Ave. just as the sign warns Don’t Walk. Cars won’t hit me, I’m saying; my black Cuban heels skimp across the pavement just enough so that I’m not really running or exerting any actual energy. Then, out of nowhere, WHAM! I’m just like punched in the face by the awful stench of raw meat. But it’s not just one kind of meat, more like a purée of different types of meats. I’m seeing these men in partially white, partially blood-stained lab coats lug meat in and out of this butcher truck that clues me in to where the ugly stench is coming from: it’s this meat supermarket place that has now been gloriously made-over into the Apple Store.

Before high-end designer boutiques like Jeffrey, Stella McCartney and Alexander McQueen; before the Apple Store, Diane von Furstenburg, stilettos and fancy black cars, the Meatpacking District was totally jank. Married men from New Jersey would pick up their transsexual prostitutes there; The Gays would pile up and just suck cock right outside in the alley. You might get shot or mugged. It was gritty, raw, and so New York. Well, so “old New York” anyway.

New New York, the myth of it, is more glamorous. And that’s the point. Some media-genius realized that people will pay whatever for nearly anything if you promise them the image of glamour and luxury. Why else would rent be higher in Williamsburg, Tribeca and Soho than it is in Bay Ridge or Harlem?

Right now, the hottest example of New York glamour on a teevee near you is MTV’s The Hills spin-off The City. The City concerns this profoundly uninteresting chick named Whitney Port, of The Hills “renown,” who wants to make it in the fashion industry in New York. It’s like Gossip Girl, but in actual life. Whitney takes a job at Diane von Furstenburg, which makes me totally jealz. I guess the show is supposed to kind of chronicle her adjustment to living in New York, as an “L.A. Girl.” What an original plot! In one episode, Whitney had to decide if she wanted to be a “downtown hipster” or an “uptown social.” We get to go apartment hunting with her as she buys/rents (?) a delicious new apartment with floor-to-ceiling windows on the 30th floor of a building in Gramercy.

But Whitney must be majorly bummed that she isn’t even the star of her own show. Nope. The real stars are New York, duh, and this sassy It-girl wannabe Olivia Palermo who I am kind of in love with. First of all, Olivia, who I had never even heard of before this show, is this gorgeous, fashion-forward glamazon who acts like she single-handedly runs New York. It’s fabulous. She wears crazy outfits and lives in this sick apartment in Tribeca, also with floor-to-ceiling windows. MTV is clearly trying to make her the next icon for young girls and gaycon for little gay boiz everywhere. Paris Hilton is officially over.

The second star is New York, which has never looked better on TV. Seriously. The images they show of New York are almost so good you could eat ‘em. The City obsessively shows us a hip, cool, glamorous New York. We get to see the New and Improved Meatpacking District, with its celebrity-stuffed bars, cobblestone streets and high-end retail. We never set foot in the subway and we take taxis everywhere. Because obviously, that’s how real New Yorkers roll. Only poors take the train.

What’s so interesting to me about The City, and shows like it, is the amount of effort spent to portray New York as glam. I think these glamages (get it?) are crucial to feeding the myths folks have about New York. I mean, it’s partly the glam myth that brings millions of tourists to New York. It’s that myth that makes people desperate to move here. And it’s the myth that seduces people to pay $4000 in rent to live in a one-bedroom apartment in the newly hip Bowery.

Back in the 1970s, when New York was on its way out, what with blackouts, fiscal crises, red-hot race-relations, high crime, muggings, homicides, graffiti and homelessness, Milton Glaser, the graphic design genius who helped found New York magazine—the first lifestyle magazine devoted to nightlife and culture in New York—had a really great idea. He figured out that New York would never shed its bad reputation or get that much-needed makeover if images of urban decline kept infiltrating teevees all over the US of A. So what did he do? He invented the logo that tourists all over the planet know: “I Love New York.” That simple gesture, in part, created the old new New York. Our new New York, though, has shifted from “loving” New York to “OMFG I need to go be glamorous in New York just like Olivia Palermo.”