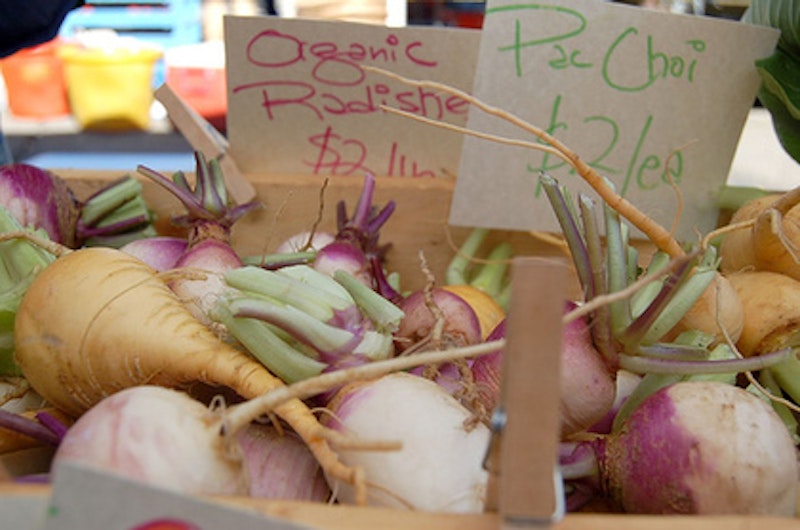 The grocery store is where I pretend to be a different person. Through the aisles, the produce, the meat, and the bread, I look for labels: Organic. Natural. Free-Range. Raw. These are things that I claim appeal to me.

But the crux of this story is not centered upon who I pretend to be, but rather upon who I am: someone who’s addicted to fattening food. If it has the potential to bloat my belly or swell my face, I am in love with it. Real love. Batter it, fry it, toss it my way—I will make quick work of it. I move with the speed of a fox that has stumbled upon a dead moose. I must hurry before the ravenous wolves come in.

No discrimination: if it has flavor, I will consume it.

The problem with this addiction is that it doesn’t match up with the idea of myself. If I were an alcoholic, you might say I suffer from Denial. But I don’t. Denial is for people who don’t write about their addictions. What I suffer from is Organic Guilt. I want to believe that I am a holy vegan. A purist. A vegetable guru. An enlightened frequenter of natural co-ops (and only co-ops, for it would be imprudent to eat natural just part of the time).

Every once and a while, usually while I simmer in my apartment with a dizzying caffeine buzz, I begin to feel noble, superior even, and I’ll make my way to the local co-op just a few blocks away. There I’ll pick out gourds and herbs and raw produce, always with the intention of cooking from scratch some urban delicacy that surely would make the food and health editors at The New York Times happy. Maybe some day I’ll jar my own pasta sauce, I think, looking at mounds of fresh tomatoes. Whereas most men dream of beach vacations teeming with giggly playmates, I fantasize about soup-making. By now it’s hard for me to count the number of animal carcasses I’ve asked my mother to freeze so that I might some day come over and make my own stock. My parents’ freezer is a graveyard of from-scratch wishful thinking.

I genuinely do want to cook. That’s true. And on occasion I do. But most of the time I just think about what I should be cooking while eating fast food or take-out.

At the grocery store, I must put up a front. Long ago I quit buying frozen foods simply because they don’t seem to jive with who I think I am. And having some education, and even cultural savvy, it seems as though frozen food is antithetical to all of that—a tainted backdrop sitting in the portrait of the person I’ve become.

But the urge to eat easy is still there. At the grocery store I feel as though I am again in middle school, buying Abercrombie & Fitch in order to assert my dominance over the pimply pups clad with K-Mart. This is what the grocery store is for me now: an image factory—a place where I am allowed to buy the lifestyle of my choice. It only costs money. I know that natural food is not inherently evil—but in my mind it has elevated to a status beyond food, and instead has the ability to define who a person is. If I buy organic, it’s not because I think it will taste better or because it will be better for me. I buy organic because that seems to be what all of the cool kids are doing.

Who am I to blame for the state of natural food as a status symbol? Obviously, food has represented a great many things throughout history. The top-tier fat cats usual dine on whatever elusive slaughtered animal has the highest price point, while the blue-collar set bites into drippy burgers while denouncing fancy crap.

I first became judgmental about peoples’ food choices after becoming an avid viewer of cooking shows. This led to a certain food snobbery, a disposition to label and accuse those who don’t take their eats seriously. And then something monumental happened. I began reading about food, devouring the work of authors like Michael Pollan and Eric Schlosser, and I began to feel the great guilt spawned by my own foodie inferiority. It felt distinctly Catholic. An unbeatable guilt was born. Even my food idol Mark Bittman delivered a TED [http://www.ted.com/] talk about the evils of our eating ways, further nailing shut the coffin wherein my joyful food consumption lay.

I no longer mindlessly intake the foods I was raised on. I get nervous whenever I desire unethical nutrients. I have to juggle between the foods I crave and what other people dictate. Every meal choice is a potential meltdown. Do I take the easy road and ruin the world by ordering Domino’s, or do I make vegan pizza using only locally farmed beet-derivates?

Eating right, it seems, has become a full-time job. And in a world already filled with work, the stress caused by maintaining my nutrient levels is too much. Food, I’ve discovered, is the last thing I want to feel guilty about.