In which holiday shoppers are given a word of advice: CHILL. 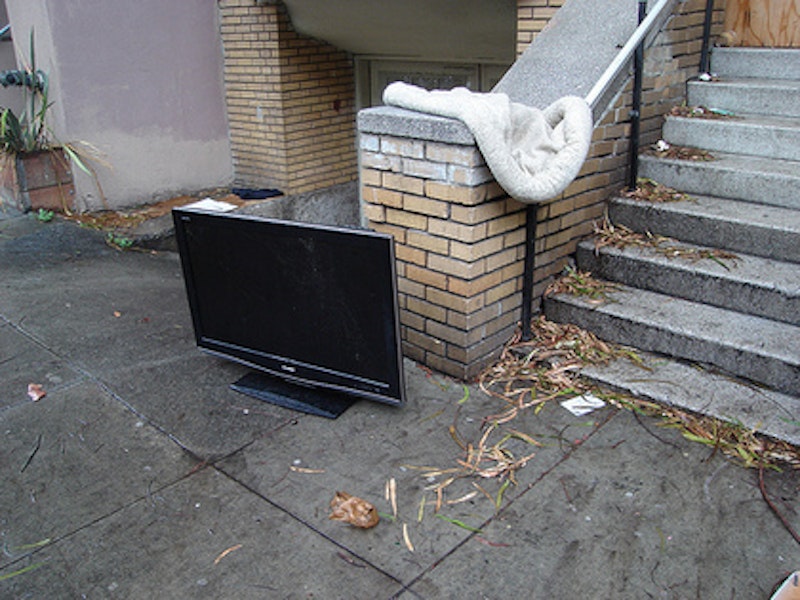 I got an email yesterday from Sears, because it is where America Shops (and I am America), and my friend Sears told me that LAYAWAY IS BACK, so's I could "BE READY FOR THE BIG DAY," which made me wonder why Sears wanted me to buy shit "on Layaway" for my own Birthday, but then there's that other Big Day, with The Jesus, and the The Santa, and I guess I'm glad Sears (which is also actually the K-Mart) is giving us (as in U.S.) the privilege of laying some stuff away and paying for it a coupla bucks at a time as opposed to slapping it on some credit cards, but c'mon, man, in these Uncertain Economic Times, shouldn't we (as in You) just kinda chill on the Consuming for a Li'l bit, huh?

I mean, errbody's talking about how nobody really Feels the War on Freedom—except for people who are actually Over There getting shot and blown up and all their friends and family—and well, yeah, it's kinda psycho to have World War effing III going on and we (as in Us) are all Over Here gearing up for the big Consuming season, but there's also the Economies, man, like, of Scale and whatever, Micro, Macro, Schmackro, and that's a whole other kinda War that people—except for all the people who are getting axed from their jobs and their friends and family—are totally not feeling, man, and this LAYAWAY crap is a perfect example.

It's just like, howabout taking a pass on the hardcore Consuming this time around? Times is Tough, man, save your money, take a siesta on Buying Shit for the upcoming Festival of Consumption, or at least make a deal with everybody to Lower Expectations Considerably for the ho-ho-Holiday Season, you know? Like "take a knee," as it is put in the Wide World of Sports, huff some oxygen, go to the locker room and get an IV, rehydrate, have a nap, enjoy a snack, just don't let these fuckers at Sears trick you into Spending Money while the Economies are all doing swirlies down the crapper.

And another thing, man, these bailouts, billions and Billions and ka-Trillions of Squintillions of U.S. Dollars are being printed so they can all get shoveled into these suck-hole rackets of Finance, and that's totally fucked up, man, all this crap about Main Street and Wall Street, fuck 'em both, sorry Charlie, but if I was a Wizard of Finance, speculating every day on Wall Street, my dividend would be not so tremendous baby, because I would close all that shit for at least a month. Siesta Time, man, slow down, you know? I mean, the Stock Market, which somehow is supposed to be a Measure of all the Economies, is going up and down, and up, and down, and down, andupanddownanddownandthenupandnowaitnowitisupandthendown, and none of these motherfuckers on the news knows Why, man. Usually there's some bullshit-artist saying Why, but not any more, man, now it's like the weather. Ask a weatherman Why it rained last night, okay? They know how that weather happened, but there is no Why.

So I say shut that shit down for a couple-few months, okay? "The Developed World is in a Recession," that's what I just heard on teevee, so that means the Undeveloped World isn't feelin' it the same way. Learn from the goddamn Underdeveloped World! Lower your standard of living, become a cut-price person in a Low Budget Land, you know? I mean, I love Teevee, man, I [heart] it totally, and I started listening to the Siren Songs out there with the Big Sales, and the No Interest Until the Year 2525, and I got totally sucked in for a minute, thinking about a 300-inch teevee or whatever, but it's fucked up, man, it's a trap, seriously, don't do it, and don't let anybody tell you it's Bad for the Economies to shop less, seriously, the Economies are already Bad, see? Get out of the Economy-rain-and-shit-storm, really, excuse yourself from all this consuming until this shit settles down. Spend money on good food and drink, that's what I say. Relax and enjoy some delicious meats and cheeses, chill out, don't buy that giant teevee, okay?

I'm not saying like, don't buy your kid a new Winter coat or whatever, I'm saying stop looking at the ads for the 40-60-100-infinity-inch Plasma Teevees; these stores want you to get on the no-interest-for-two-years hook for right now. What's the fucking hurry? Think about your monthly nut, man, how much you gotta cover? Now think about what the next coupla years is gonna look like, eh? Seriously, what is gonna improve any time soon? Just downshift, man, slow down, stop buying new DVDs ever week, look at all the goddamn DVDs you have, man, watch some reruns, and don't buy that new car for the Saved By Zero interest, man, keep the crappy car for a little while longer, and really, what is it with these car companies? Who is the kook who expects to be making more and more and moreandmore cars with all the shit that's going on? Some Idiots, that's who. Straight-trippin' delusional Idiots. Some car companies are gonna fall, man, and that is the Way of Nature. And I'm sorry, but you bought a goddamn house? You knew exactly how much you'd be pulling in, baby, and that Adjustable-Rate-Interest-Only-Jumbo-Balloon mortgage payment, man? You were all about Delaying The Inevitable, and now it's like, Evitable or whatever. Shit costs money, and Money Costs Money, and if you can be all Let's Make A Deal or No Deal with the bank to change up that interest rate, go for it, but you should also think about Renting a smaller place, and that big-screen wouldn't fit there anyway, okay?