Combing downtown Prague in search of the legendary Czech beer. 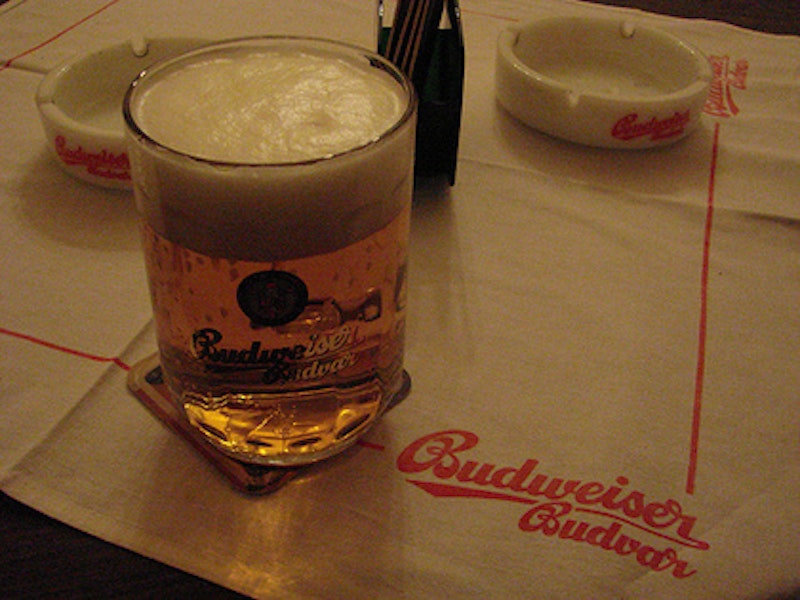 I was set on having a real Budweiser—that is, the kind made in the Czech Republic, not the ubiquitous Stateside stuff—and it seemed perversely appropriate that fate brought me to such an experience at a chic place called Café Europa. The staff was tired and limp in their badly fitting dinner jackets, the French fries were overpriced, and a hulking stone of man cranked out on a grand piano such standards as "New York, New York" and that horrific tune from Evita. My friends and I were overdressed, but they were there for the desserts—weird (but good) pancakes with sour cream and fruit and ice cream—and I was there because I needed a drink.

The prices were not so hot. One hundred Czech korun is about five American dollars. A half-liter of beer should never be more than 50 korun. Yes, the beer here in Prague is always cheaper than coffee. And Coke. And water. This place only carried Budweiser at 90 crowns a pop. Whatever, I'm on vacation and it'll be a learning experience, I thought. The lovely art nouveau wood paneling and ornamentation were a plus.

There were two options: Budweiser Budvar and Budweiser Dunkels. My ideal beer has the consistency of motor oil, so I went with the latter, the dark beer, first. While I was disappointed in the brew's lack of thickness save for its weighty head, it was lightly carbonated and was a tongue pleaser: it filled the mouth with a bit of chocolate and smoke then quickly dissipated. There was very little aftertaste, which is not always a bad thing.

The Dunkels was rather similar to the Krusovice my girlfriend and I are fond of drinking (25 korun for a pint can at the bodega-style "potraviny" around the corner). Neither was as good as the Kozel that seemed to be on tap everywhere we went. Kozel has a deep chocolate color with a thickness of flavor that shouldn't be mistaken for a heavy beer. If there's something to vaguely unify the many Czech dark beers I've had, it's that they are dark in taste, not weight. A Dogfish Head or a Rogue or a Samuel Smith's would seem like sludge in comparison, but that shouldn't indicate an edge. The Czech dark beers on a whole are crisper, cleaner and less carbonated than nearly any American beer I've experienced. The country itself drinks more booze per capita than almost anywhere else in the world, so the beer isn't coming from very far away. That means less refrigeration, less carbonation and less sitting time.

The Budweiser Budvar, the flagship Budweiser, isn't very good. Compared to the Dunkels it seems as carbonated as champagne. It has vague accents of fruit and wood but is ultimately forgettable.

If you go Czech, go dark. Even if you're not in my beer-as-molasses camp, you'll be surprised in all the right ways. Just don't pay more than 40 korun for it.