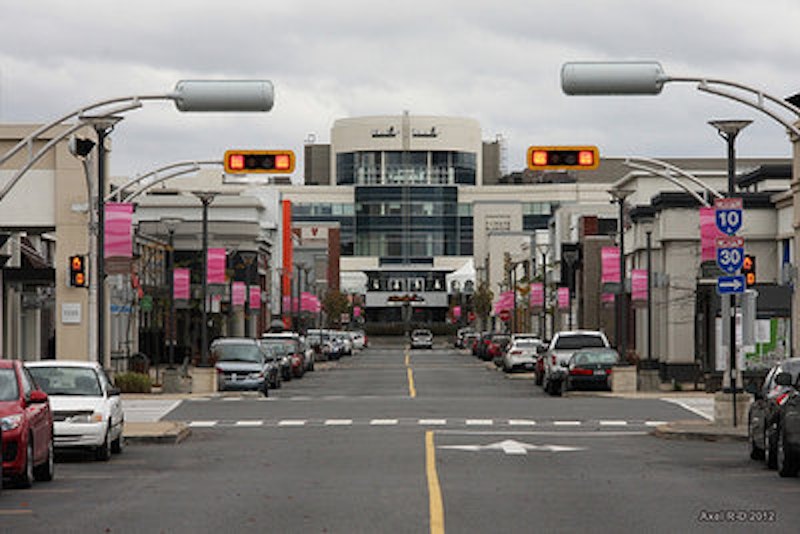 In early February, reports circulated that a new mega-mall was planned for a large parcel of land less than an hour’s walk north of where I live. Not just a single building, it’d be a massive complex covering three million square feet, or about 70 acres. The project would essentially build an entire privately-owned shopping district from scratch, including restaurants, a hotel, movie theaters and a live performance venue. It’d be a major new development for the island of Montreal. Reading news articles about the plans left me with mixed emotions.

Normally I’d be worried about the developers going bankrupt or pulling out partway through the job; I’d also wonder if they knew what they were doing. Not in this case. The developers, a company called Carbonleo, already own much of the land they’re planning to build on, having bought up parcels for years. They’ve done this sort of thing before: a similar project in the Montreal suburb of Brossard, the Quartier Dix30, has become a major commercial success.

Built at the intersection of Autoroute 10 and Autoroute 30, the Dix30 bills itself as a “lifestyle center.” I’ve never visited the place, but I’ve seen it from the highway; it’s a little like the shopping equivalent of a housing development, with its own streets and coordinated architecture. From the outside there’s a Lewis Carroll feel to it, a shopping wonderland with its own internal logic, conjured, ready-made, all at once, out of money.

Do I want something like that near me? What will it do to traffic in my area? What will it do to the merchants whose stores I frequent? There aren’t many bookstores left in Montreal, especially English-language stores, but within a few blocks of my apartment are a bookstore, a comic store, and a gaming store. Will the new mall affect them?

Who knows? Some local politicians raised concerns about the mall’s effect on merchants in downtown Montreal—an hour’s walk for me in another direction. This thing’s going to have a footprint. Who gets squashed by it?

I took a walk out to the proposed site, with the vague idea I’d get a sense of the scale of it by walking it out. A brief guide to Montreal’s geography will be useful here. Stand on top of Mount Royal, the geographic feature that gives the island and city their name, and look south—“south,” that is, according to the directions of the city’s street grid, out-of-tune with geographical south. You’ll be looking over downtown toward the Saint Lawrence River; Brossard’s on the far shore, with the Dix30 a couple miles from the river. Turn right and you’ll be looking in the general direction of my home, in the Snowdon district of the borough of Côte-des-Neiges–Notre-Dame-de-Grâce. Keep turning and look to the north and you’ll be looking toward the Town of Mount Royal, TMR, an affluent suburb founded in 1912 as a “model city,” a planned community. Most of TMR is centered on a railway station more-or-less directly north of the mountain, but part of it extends to the west and controls the land where the new mall’s going to be built.

The Décarie Expressway, also known as Highway 15, stretches northward through Snowdon to the elevated east-west Metropolitan Autoroute; where the two meet the new complex will be built—the “Quinze40,” some have taken to calling it, on the model of the Dix30. The Expressway’s a deep trench six lanes wide, plus divider, plus occasional on-ramps and exits, plus service roads along either side. Dug out in the mid-1960s, it’s a scar running through Snowdon which took a toll on the restaurants and businesses along the boulevard the Expressway replaced. Before the Expressway, Décarie was a wide street with multiple streetcar routes; the Snowdon district developed around those tram lines. In the 50s it was said to be Montreal’s second-largest shopping district outside of downtown. That ended when the streetcars were shut down and the Expressway was built, a parable that shows the damage poor urban planning can inflict.

I reach Décarie Square, a forlorn shopping mall built in the late-70s. It was supposed to draw from the Expressway traffic, but that never happened; much of it’s empty, though it has a nice discount second-run movie house. Train tracks behind the mall mean I have to go back to the Expressway here, as the only pedestrian crossing is a narrow, dark, noisy sidewalk under the tracks and above the Expressway. At the moment you have to go a good ways to the west to find a street that crosses the tracks; I’ve heard the Quinze40 includes plans to put through a road crossing at Cavendish Boulevard, something that’s been discussed for decades.

I cross under the tracks, and come up beside a Walmart, formerly the symbol of corporate chains that ruined local economies. It seems so small-scale now. Past it is the closed Hippodrome, formerly known as Blue Bonnets. The racetrack closed in 2009, and there’ve been talks for the past few years of a new housing development on the site, currently stalled due to legal issues with the city and province. If and when it gets going it’ll potentially be the home to clients for the Quinze40, as will another large-scale housing development on the other side of the Décarie, called the Triangle. That’s three large-scale projects essentially right next to each other. I wonder how closely this has all been examined. Are there schools and hospitals for all these people? Police and firehouses? Public transit? Somebody has to have done studies. Haven’t they?

I hope so, but wonder about the communication surrounding these projects. The Quinze40 is on TMR land. The Triangle and Blue Bonnets projects are in the city of Montreal. Are the two municipalities talking?

There’s already some politicking going on around the Quinze40. Marvin Rotrand, city councilor for Snowdon, had an op-ed in the Montreal Gazette the other day in which he complained about having “no reliable information about the supposed Quinze40 development.” And: “The ball is actually in the developer’s and Town of Mount Royal’s court. There needs to be some real transparency, totally lacking up to this point, about what is actually planned, how big it will be and how much traffic it will generate.”

He’s not wrong. The lack of information and public statements is worrying. Already the opposition party at City Hall, Projet Montréal, has come out against the project, stating that they’re worried about the effect the shopping district would have on merchants downtown. Mayor Denis Coderre has yet to take a position, citing a need for proper studies of the project’s effects. The mayor of TMR, Philippe Roy, appears surprised by the backlash the project’s received, and has suggested having a referendum on the issue—in TMR.

Rotrand: “I saw an article in which it is estimated that the Quinze40 would attract 22 million visitors a year, or about 55,000 a day. That could mean an additional 40,000 cars using the Décarie service road and Highways 15 and 40 every day. That is really hard to imagine.” I see what he means as I walk north, to the elevated Metropolitan Autoroute. Which is packed with immobile cars.

I’m on the western side of the Décarie, passing various small office buildings. Bland architecture, a little larger than human scale, yet still somehow lost between the Décarie and the looming Metropolitan. None of them seem to have anything to do with each other; good architecture relates to its environment, but these buildings all look isolated. It’s Ballard-land, a place people pass through more than visit. As I walk along I see how many are passing through. Two highways, both choked with cars. Add two major housing developments and a shopping district; what then?

I reach the north end of the Expressway, and turn left, walking along Côte-de-Liesse Road. This will be the northern edge of Quinze40, as I understand it, in the shadow of the Metropolitan. A police car’s siren is going off somewhere above me on the highway. It can’t move. Too many cars.

Côte-de-Liesse is a long and mostly uninteresting walk until I reach Devonshire Road, a two-lane street also filled with trucks and cars. There’s a large Kraft plant; the Quinze40 is destined to be cheesy, which tracks with what I’ve seen of the Dix30. I walk south, imagining the random buildings about me replaced by a lifestyle center. Ballard giving way to Baudrillard: a simulacrum of organic urban evolution.

To be fair, I’d be hard put to find much architecture in the area that would be a tragedy to lose. I reach Royalmount, and walk eastward back to Décarie where I turn south again. I don’t know if I’ve learned anything, although seeing the amount of traffic and imagining more on top of it has been eye-opening. Mainly I’m left with questions about the value of urban planning, set against the value of letting a given area evolve on its own.

Walking along Décarie, I glance up, and see probably the most distinctive symbol of the area: a three-story orange ball. The Gibeau Orange Julep was the brainchild of Hermas Gibeau, who claimed to be descended from Hermes, and said he always wanted to build the biggest orange in the world. He invented a fizzy orange drink, founded his first restaurant in 1928, in 1932 opened another on Décarie Boulevard, and in 1945 took advantage of a post-war drop in cement prices to rebuild the restaurant at the bottom of a three-story orange sphere, with living quarters above for himself and his family. It’s almost swallowed up by its large parking apron; back in the 50s and 60s the Julep had waitresses in roller-skates and pleated white skirts. These days I’ve heard that classic car enthusiasts gather at the Julep Wednesday evenings.

Why not? There’s something weirdly cheerful about the giant orange, almost reassuring. It’s weird and individual and it’s lasted, partly as a throwback and partly because it found a niche and a customer base. Appropriately spherical, it’s rolled with the changes that time brought; that time always brings. Will it survive the Quinze40? Who knows? But the Quinze40 itself, if it’s ever built, will not be eternal or unchanging. It will be part of a larger urban fabric. And it will be shaped by that fabric in ways that can’t be predicted. If it’s going to last, it will have to find its own place.