Successful rebranding does nicotine a disservice. 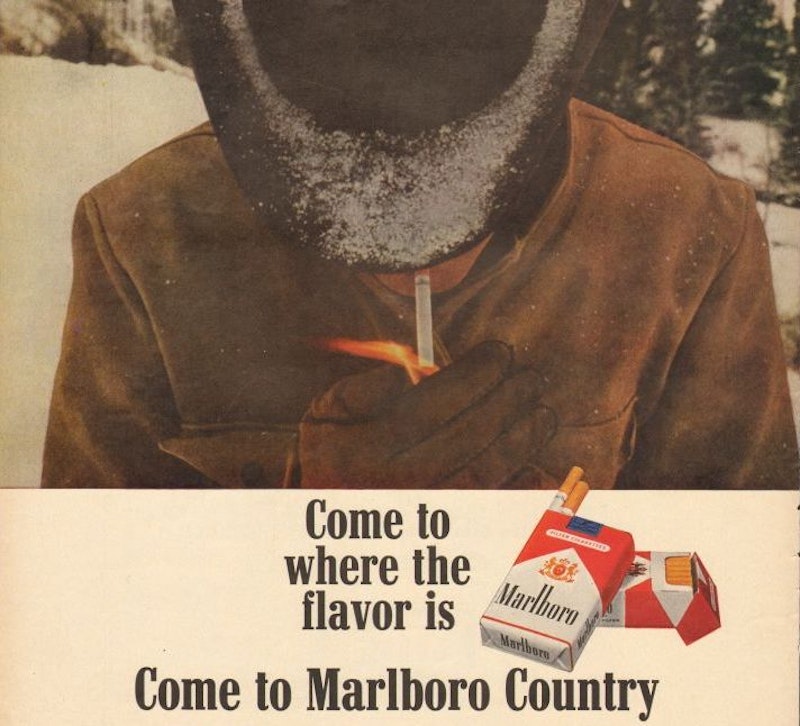 I can’t remember the last time I heard or read anything from a cigarette spokesman, but a short article called “Marlboro Wins Over Millennials” showed up in the Wall Street Journal yesterday. “‘It’s making Marlboro relevant again,’ said Bonnie Herzog, an analyst with Wells Fargo,” sounding a bit Trumpian while fawning over Philip Morris’ record market share with these Marlboro Blacks. “The lower-priced cigarette offers what the company calls a ‘bold, modern take’ on Marlboro—think tattoos, black jeans and motorcycles instead of Stetsons, bluejeans and horses.” I don’t smoke Marlboros anymore, but when I did, I preferred the 27s, an offshoot that’s somewhere between a Red and a Light. Marlboro Blacks have notes of oak, timber, spruce, tattoos… fuck if I know, I never cared for them myself. I switched to American Spirit Yellows two years ago on a whim and haven’t gone back. It’s a good smoke. What can I say? I don’t know how to pick up on notes, and they definitely don’t make me think of clothes or motorcycles or buffalo. They last longer and I feel better—the morning after I switched I felt like a brick had been lifted off my chest. Anyway, this isn’t an advert: no one’s eager to advocate for nicotine or cigarettes.

This quote by Frank Zappa is better than any of his music: “I don’t believe that all the stories about the evil effects of tobacco are true. To me a cigarette is food. Tobacco is my favorite vegetable.” He goes on to say: “The taking of drugs is a license to be an asshole, which is the same reason why people drink.” All smokers are demonized in this country, no matter if you smoke two or 20 a day. Alcohol, a more dangerous and harmful intoxicant, enjoys comfy status as our universal social lubricant despite all the negative runoff it causes—bad behavior, drunk driving, and debilitating addiction. Smoking cigarettes will not ruin your life unless you do a John Wayne and go through three packs a day for 50 years.

But smokers and cigarette smoke is considered gross now. Fifty years ago, cigarette smoke was unavoidable, and I’m really glad I came of age when smoking inside is banned everywhere, because otherwise I’d probably be more inclined to hang out in bars and end up going through a pack or two a day. Now, I’m at a strict five a day. Brian Blomerth wrote a great comic a couple of years ago called Understanding Nicotine about nicotine and alternative methods of consumption: insufflating, drinking, chewing, vaporizing, and injecting. He writes that “smokers are seen as second class citizens” in the United States and Europe, and yes, though tobacco was the fuel of the 20th century, cigarettes can kill you. The quitter’s dilemma: you smoke when you’re happy, sad, angry, excited, tired, sleepless, stressed, depressed… Marlboro may be more interested in re-branding from red packs to black packs, but in the long run, if they want to stay in business (or corner an emerging market), all cigarette companies should invest in alternative methods of nicotine consumption. E-cigarettes may be slightly less risky than “analogues” as a friend of mine calls them, but the enormous, thick, “milky” plumes they produce look goofy and out of place anywhere. But more power to them… it won’t impair your judgment or ability to drive. Prescription speed in the form of Adderall, Vyanse, Dexedrine, Concerta, and Ritalin gets kids through school more than ever these days, and I don’t think it’s a stretch to say that they’d be better off in the long run drinking nicotine-infused water, free of caffeine or taurine or any of that other energy drink nonsense. Maybe they should try Slippy Syrup in the mean time.