Lady, Let Me Tell You Something

Get back in your fucking coffee shop. 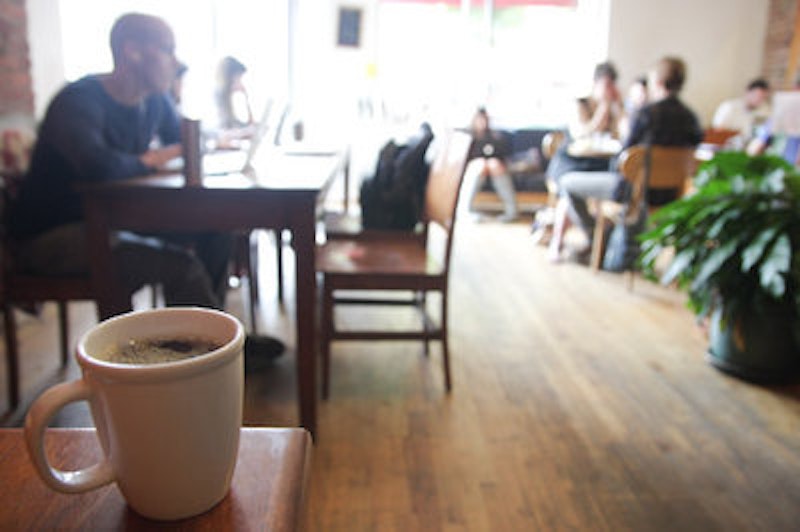 This is about me and Laura, a woman who's the owner of a cafe I used to go to. I was a regular there for years. Bought a latte, tipped a dollar or two, and sat in my corner and wrote. When I got tired of my computer and had to move around, I would bus tables and straighten chairs. I brought bottles of water and drank them discreetly when my latte was done and I still had a few hours ahead of me.

One day I didn't pack my empties and bring them home; I left both of them on the table. Laura found them and told me no more bringing in water. I argued it was a first-time offense. “I'm sore-ry,” said Laura, who has an irritating English Canadian accent. I answered that, of course, rules are rules. I thanked her for listening and stopped going to her cafe. That was a year and half ago.

Now she's convinced that she banned me. I found this out because the other day I needed a pay phone. I stopped in the Red Saucer to look for one. No pay phone, so I left.

A few doors down, near the Chinese restaurant I like, there's Laura trotting at my elbow. “Calvin,” she says. “Calvin! We banned you. You remember that, don't you?”

I tell her she didn't, she had just told me I couldn't bring in water. She says she did both. Okay, I say, what did you ban me for?

She can't tell me! First she tries to bluster about how there's something strange and out of line about my asking for a reason. By now she's rattled and she's speed walking back to the door of her coffee shop. I'm keeping up with her, speed walking too. “If you banned me,” I said, “there had to be a reason. What was the reason?”

Laura comes up with her response, and it's this: "Uh, uh, uh, because."

I steamroll her. I deliver the ancient, inevitable, completely right response to the answer she gave me. “That's what a child says,” I tell her. “A child says 'because.'"

She's reached the door, she's grabbed the handle, but I'm holding her eye. There's five seconds where she can't get it together to break contact and duck in. "Okay," I tell her, because by now I'm mad, "you don't have a reason. You're going to be petty and arrogant and hateful for no reason." Then, my hands wagging in the air in time to my words, "Nice knowing you."

There's no wrinkle of meaning that explains the emphasis on "know." It just felt better; it punched things home.

And then she was through the door, and I hope to God I never see or hear that rancid, presumptuous, jumped-up little squirrel again.

My first reaction to the episode was to feel hurt that I wasn't wanted. I felt I had done something that made me generally unpopular with the staff and that's what Laura was acting on. I couldn't think what it might be, maybe just the accumulated awkwardness of dealing with somebody so shy and socially unconfident. You know how I feel about myself.

That thought has cleared away. Laura has forced out so many people, several of them people that I liked and found entirely reasonable, that I've decided that she thinks she banned me simply because I argued with her a bit about the water bottles way back when that episode happened. She associated me in her memory with defiance, I wasn't around, and eventually she assumed that she had banned me... for something.

By now I'm delighted with our little sidewalk harangue. In telling the story to my neighbor Ralphy (also banned, in his case because he jumps on furniture) it occurred to me that I had been telling her off and she ran to get away from me. That's how things happened. I ran her off the sidewalk in a fight that she started.

This is one of the few times in my life that something like this has happened. I feel great. I think this moment has been the best thing to happen to me since I found yoga.